It’s just always been there, our courthouse. Like a huge, brick and stone sentinel, it watched over generations of Jefferson Countians from its lot on East Main Street. It was unchanging, or seemed to us to be, like few things are in this life. It was reassuring to look eastward and upward and see the graceful, Greek Revival west porch and balcony, the lofty dome with its four clocks (often showing four different times, but, heck, even noble edifices are not perfect), the gently sloping roof high above the street below. The politicians who ran the offices inside may have been imperfect, but our courthouse was an anchor, a symbol of local democracy, the official center of a county named after one of our greatest presidents. 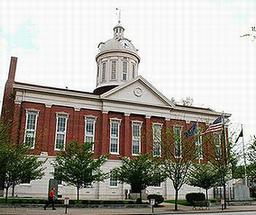 And then Wednesday, tragedy struck when a blaze of still undetermined origin erupted in the noble cupola, spreading to the roof and the third floor, leaving that story heavily damaged and the roof and dome destroyed by the fire, and considerable water and smoke damage on the second and first floors, and in the basement where a multitude of county records, some of them irreplaceable, are stored. Madison’s firefighters battled the blaze skilfully, assisted by other companies from neighboring communities, but the fire would not be denied for many hours. It left the heart of Jefferson County, our towering inanimate protector, in a shambles. 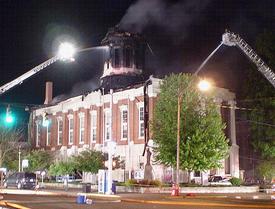 Our courthouse is like a very, very old man who has seen it all in his life and still walks downtown, proudly if more slowly and carefully than he used to, each morning. Our old gray sentinel started life as as a young, handsome whippersnapper of a courthouse in 1854-55, when it was built to replace its predecessor which had burned down. An existing photograph taken in 1856 shows the almost brand-new center of county government, looking almost like it did until late afternoon yesterday, except for a slightly lower dome. In 154 years, it hasn’t changed that much — on the outside, anyway.

Of course, on the inside there were many changes, not including the steady come and go of elected officials and their employees. Over time record keeping implements went from quill pens, to fountain pens, to typewriters, and finally in our own era, to computer systems. Telephones came in late in the 19th Century; electric lights and more modern heating in roughly the same era.

And what the old edifice has seen from its firmly planted location between Jefferson and Walnut! The celebration that marked the Union victory in the Civil War — and the sorrow that followed just a few days later when Abraham Lincoln was assassinated.  The official festivities marking Madison’s 100th birthday, in 1909, when the courthouse was heavily decorated with bunting and flags, and an elaborate reviewing stand was built in front on the Main Street side. Jubilation in the streets in 1918 and 1945 when America emerged victorious in World Wars I and II. And parades, parades, and more parades, which usually either began or ended at about Walnut Street.

A first-run Hollywood movie, “Some Came Running,” featured shots of the old courthouse in both its beginning and its climactic scenes. Statues honoring our local soldiers, which often look like they’re defending the venerable old structure, were erected over the years.

And when a retaining wall was built around the courthouse, old men in the community found it a perfect place to sit and reminisce, trade knives and exaggerations, and watch the world go by. After all, the courthouse belonged to all of us.

Now, like the very old man who perhaps has suffered a heart attack, and must have triple-bypass surgery, our courthouse is in distress — temporarily. But it’s not out. Eventually the old man will be walking downtown in the mornings again — maybe with a little more spring in his step. Eventually our courthouse will be rebuilt, or renovated. Given sufficient time, local officials, who come and go, will hold a ceremony to dedicate our newly repaired center of county government.

You can’t keep a good courthouse down.

3 comments for “Our venerable guardian: Rising from the ashes”