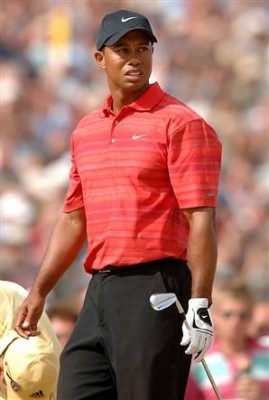 And so Tiger Woods, allegedly the greatest golfer who ever lived (that’s debatable, but it’s what the press tells us, and would the press lie to us?) withdraws from the professional links and his public life to try to recover from an embarrassing ailment for a “Mr. Clean”: Too much tail.

Yes, this Tiger had tail to burn.  A cousin with four feet and plenty of pride from Bengal would be, uh, green with envy. This clean-cut young athlete with the million-dollar smile and the mixed-up ancestry wanted to be like Jesus and love ’em all. And see what it got him?

We men get kidded, and kid each other, a lot about sex. The stereotypes: Men are always ready for sex — we don’t have to be “in the mood” like women do. Unlimited access to sex would be like dying and going to heaven. Hmmm — wonder if that’s where Mohammed got the idea for Paradise and the Seventy Virgins? Men think about sex every eight minutes — or was it eight seconds? Men will overlook lousy personality, bitchiness, physical violence, whatever, in a woman as long as she’s good-looking and willing to go to bed with them. Blah, blah, blah …

Now, don’t get me wrong. I’m all for sex. It can be one of humankind’s most elemental and basic pleasures. It’s what keeps the human race going. There are infinite varieties of it. It’s great. Hooray for sex!

But here’s the thing: the famous actor and director Clint Eastwood (also an enthusiastic supporter and practitioner of sex), once said, “Sex is great. But 99.9 percent of the time, you’re doing other things (than having sex).” In other words, as great as it is, it’s not the be-all and end-all of life — despite what some men tell each other.

Which brings me back to Tiger. What kind of madness would make a man who had the world by the — well, tail, like he did, risk it all in order to roll in the sheets more often than he strolled on the course? At least, from the stories that are coming out, it SEEMS like that’s what he did. Was there no still, small voice that ever whispered in his ear, “Tiger, all this fun may blow up in your face some day”? But I guess serial whoring  is like liquor or drugs — it gets hold of you and blinds you to reality. You think you’re omnipotent. “I’m Tiger Woods — I’m the idol of the whole golfing world. I can get away with anything; nothing will happen to me.”

One has to feel sorry for Tiger’s Swedish wife (their kids will be Afro-Thai-Native American-Swedish, plus whatever other Caucasian ancestry Tiger has coursing through his veins; can you imagine?) He’s made a mockery of their marriage and held her up to worldwide embarrassment. But of course, we don’t know for sure that she hasn’t cheated, too.

And that brings me to another point. Yes, Tiger violated his marriage vows; no doubt about that. But what about all these women he was bedding? Even if not a one of them was married at the time, they knew that HE was. We often like to act as if a cheating husband bears the entire burden of the guilt. Not when he’s a celebrity who is known worldwide to be married. These women weren’t bottles of vodka he was drinking or cocaine he was snorting. They were adult, responsible human beings who knew they were enabling a super-rich world celebrity in his marital infidelity. But, hey, the money was good, and who cares about a little inconvenience like a wife?

Apparently Tiger didn’t. And apparently his aidors and abettors didn’t, either. So, shame on all of them — the guy, AND the women.

← All the news that fits (our world view), we print
Christmas Eve: Brenda sees the light →