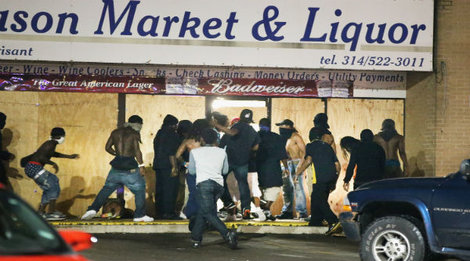 Looters use Ferguson riots as an excuse to rob a liquor store.

It’s now two weeks since Michael Brown, all 6-4 and 292 pounds of him, was shot and killed by Officer Darren Wilson in Ferguson, Missouri, and the race hustlers are still milking the incident for all it’s worth.

Protests, riots, looting, and blatant lying about the details of the incident that led to Brown’s death have been all over the news ever since the shooting occurred after a confrontation between Brown and Wilson on Saturday, Aug. 9. The news media have done everything they can to keep the story alive, as they figure that “poor, unarmed black youth killed by vicious, racist, murdering White cop” stories make the public come a’ runnin’ — and keep coming. Fox News, which isn’t as “fair and balanced” as it claims to be, has cornered a different angle: “Are the news media making the crisis in Ferguson worse?” Uh, YEAH — and Fox News has been as guilty of it as anyone else. Maybe more so. Racial stories — that is, ones in which a case can be made that black people were deprived, discriminated against, put-upon victims, and White people the villains of the piece — seem to be like the Energizer Bunny: They keep going, and going, and going …

On the other hand, the mainstream media has shied away from stories about the “Knockout Game,” occurring in many U.S. cities, in which black youths will sneak up on a lone White person and “sucker punch” him (or her), knocking the victim out, then going merrily on their way. It’s a very serious societal problem, and a continuing series of criminal assaults, but most of the sable-hued perps have gotten away scot-free. Other attacks by blacks on Whites in recent years have been mostly ignored by the mainstream media, only coming to light on places like Fox News, American Renaissance, and the like, which are not afraid to anger the race hustlers and their allies on the political left.

Why are American White people so tolerant of such blatant double standards, nearly always applied to try to shame them and make them look bad? Well, for one thing most of us aren’t “eat up” with the subject of race, as significant numbers of blacks, and their White liberal allies, obviously are. We’re busy living our own lives, earning a living, raising our families, etc. Not to suggest that a lot of black people aren’t sharing the same concerns, because they are. But it seems that it’s always the squeaky wheels, like Jesse Jackson and Al Sharpton, who get the grease. And they are certainly “wheels” in the racial grievances racket. On the other hand, Dr. Ben Carson, the black, world-famous surgeon who has been making statements recently about politics on the conservative side, is ignored by the media most of the time, as he’s too accomplished (through his own efforts), too soft-spoken and too sensible for them. Give them a screaming Al “Charlatan” any day!

What about these claims by Michael Brown’s friend who was walking with him when the confrontation with Officer Wilson occurred? The friend says that Wilson reached out of his patrol car window and grabbed Brown by the neck after the two black youths refused to quit walking in the middle of the street when he asked them to last Saturday afternoon. He also claims that they ran away, that Brown then turned to the officer, put his hands up, and said words to the effect of, “I’m unarmed!” And that the officer then proceeded to shoot him six times, the last, fatal, shot hitting him in the head.

Now think about that. If you were a police officer of average size, as Wilson is said to be, and you saw a 6-4, 292-pound youth doing something that you felt you must stop him for, would you reach out of your patrol car window and grab him by the throat? Would it even be physically possible for you to do that? And assuming that what the friend said about Brown yelling, “I’m unarmed!” is true, and you were the officer, would you take this guy’s word for it? Wouldn’t that be a good way for him to get you off balance, cause you to let down your guard, then suddenly pull out a handgun of his own and shoot YOU?

Some witnesses have said (when recorded, unaware that a cellphone video was being shot just after Brown was killed) that Brown rushed at Wilson as if to attack him after he had turned around, and that Wilson, dizzy from a fractured eye socket he received when he was struck by Brown, shot the youth six times, apparently feeling that he might not survive another attack from the huge teenager.

And those who say, “Well, he didn’t have to KILL him!” are being ignorant about the training police officers received in police academies. They are trained NOT to draw their sidearms, UNLESS they’re pretty sure they’re going to need to use them. But they are also taught that if they honestly believe either theirs or some other person’s life may be in imminent danger, they are to aim for center mass, and keep firing until the threat is eliminated.

As a matter of fact, most of the rounds from Darren Wilson’s weapon which struck Brown, did not hit vital organs. Is it possible that Wilson was trying to stop Brown, but avoid killing him, if possible? I haven’t heard that scenario mentioned, by anyone.

The reactions of elected officials to the incident show how petrified with fear they are of being called “racist,” or of being blamed for black riots erupting. Missouri’s governor gave a statement implying that Darren Wilson has already been found guilty — i.e., that he was seeking “Justice for Michael Brown and his family.” Local officials dragged in a black officer from the Missouri Highway Patrol to, in effect, walk among the rioters assuring them that he was “on their side” because he’s black like them and he’s suffered the slings and arrows of outrageous racism just as they (supposedly) have.

Bob Beckel on Fox News’ “The Five” quoted a statistic (not really clear where he got it) saying that while blacks make up 67 percent of Ferguson’s population, 92 percent of all police traffic stops were of black drivers. Which, I guess, he thinks proves that the police in Ferguson are “targeting” black drivers and ignoring most traffic violations by Whites.

That claim, which has been made repeatedly over the years in many communities, would, I think, be hard to prove. For one thing, you’d have to be able to get inside these officers’ heads. If there are two in the same patrol car, does one say to the other, “Hey, there’s a nigger! Let’s go get him!” Or does an officer patroling alone think the same thing to himself?

Here’s another thing: Have you stood and watched vehicles going up and down the street lately? If so, what do you especially notice about the windows of so many vehicles? That’s right: They’re tinted. Very, very often, it’s almost impossible to see the driver through the glass, let alone tell what race he or she is.

And do these people who say Darren Wilson “murdered Michael Brown in cold blood” really believe that Wilson went on duty that morning thinking, “I believe I’ll kill me a nigger today”? This guy has a spotless six-year record with the Ferguson police department, including receiving a special commendation six months ago for valor in performing his duties. There’s nothing in his police background, that I have heard of, that would suggest anything unethical, and “racist,” as that.

The press has been talking about “the people of Ferguson” as if they’ve lived there since time immemorial until this “horrible tragedy” plopped down right in their midst. Well, let’s see about that. In the 1990 U.S. Census, Ferguson’s population was 73.8 percent White, and only 25.1 percent black. By the 2000 census, the percentage of Whites had dropped to 44.7  percent; and that of blacks had risen to 52.4 percent — going from just over a quarter, to more than a half, in just 10 years.

When the results of the 2010 census were released, they showed that Whites in Ferguson had dropped to just 29.3 percent, while blacks were up to 67.4 percent. Those who want to make Darren Wilson the cold-blooded, racist murderer in this case, have cited, over and over, the fact that of the 53 officers on the Ferguson police force, only three are black. But when you have a turnover in racial balance like Ferguson did, in just 20 short years, it’s hard to keep up with the demands of “political correctness.”

Liberals are always talking about “White flight,” with the implication that it’s always and only caused by “White racism.” But think about this: In just 20 years, the proportions of the races in Ferguson almost reversed.  When one identifiable segment of the population, flees in those numbers from another identifiable segment, there is only one possible reason: Fear.

Fear of greatly increased street crime. Fear that one is not safe going out at night. Fear of the “Knockout Game,” and high murder and armed robbery rates. Fear of falling property values. Fear of miscegenation. Yes, there are still a lot of us who don’t approve of conceiving children across the color line. Call that “racist” if you want to; there it is.

Black “leaders”, like Attorney General Eric “My People” Holder, like to tell us that we need to have a “national conversation about race.” He said, early in President Obama’s administration, that America has been “a nation of cowards” when it comes to discussing such things. OK, Attorney General; I, for one, am willing to take you up on that. We need to try to avoid more Fergusons. We need to stop the “Knockout Game.” We need for White Americans (still the majority, although sadly a dwindling one) not to feel afraid to live in the same neighborhood with black Americans.

Because I’ll bring up some facts of my own. Such as: not all black Americans were slaves;  quite a number of Southern slaves chose to fight in the Confederate Army; “affirmation action” is just racial discrimination in reverse; White Americans tend to not like living among large numbers of blacks, not because they hate them because of the color of their skin, but because they fear blacks’ poor impulse control; their tendency toward extreme, sudden violence; their high crime rate; and a number of other things.

Yeah, Mr. Holder: I’m not a coward. Let’s have that national conversation about race. But don’t expect to do all the talking, with me doing all the apologizing, because it ain’t gonna happen. “You people” have contributed more than your share to our racial problems, and you need to be held to account for it. We White people aren’t the whole problem, by any means.

By the way, I had a heckuva time finding an appropriate news photo to use with this column. It seems that the mainstream media were only interested in taking photos of large groups of policemen, wearing helmets and heavily armed, preferably with a lone black person in front of them, holding up his arms as they are claiming Michael Brown did. “Big, brutal, racist White cops. Poor, innocent, put-upon black folks.” Same old song; different day.

← Old Corporal is staying a Hoosier
Louisiana: It’s a unique and varied state →

3 comments for “The racial spin doctors are busy in Ferguson”