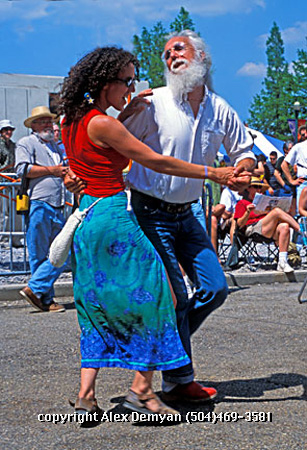 Here’s a riddle for you: When is a county, NOT a county?

When it’s in Louisiana, of course! In the home of New Orleans jazz, jambalaya and the Cajun people, they’re called “parishes” —- possibly traceable to the state’s deep roots in the Roman Catholic faith.

But that’s not the only difference between our most French-oriented state, and the other 49. Louisiana is unique in a number of ways. You say every state is? Well, maybe. But hear me out, here.

While our original 13 states were mostly founded by England-based, Protestant colonists, Louisiana’s roots trace back to the France of Louis XIV, with the close connection to the Catholic church that that implies. The French colony, established in 1682, was named for Louis. What became its principal city, New Orleans, takes its name from the French city of Orleans. French people who settled in Louisiana came to be called “creoles.” Later, that came to be a term applied to any native Louisianan, regardless of race or ethnic group.

Then, in the 1760s, another strain of French-speaking, Roman Catholic settlers began moving into southwest Louisiana. But these weren’t from France; they were Acadians, French-speaking native-born Canadians who were forced out of their home in the cold north by the British, who had won the Seven Years War against France. They put down their roots in Louisiana because it was in the New World, just as Canada was. And they began to develop their own, unique, culture which would become world famous a couple of hundred years later.

In 1803, things changed big-time for Louisiana, when President Thomas Jefferson doubled the geographic area of the United States by purchasing a huge swath of land along and beyond the Mississippi River from France. It came to be known (oddly enough) as the Louisiana Purchase. The territory became a state in 1811, and Anglo-Americans, mostly Protestant, from the other Southern states began moving in, especially into the northern part of the state, where many plantations were established, complete with the black slaves who were the “hewers of wood and drawers of water” for wealthy White people all over the South prior to the Civil War.

From the outbreak of that war, all the way through to the 1950s, when Brown vs. Board of Education overturned the “separate but equal” status that had prevailed racially all over the South for decades, the history of Louisiana was not terribly different from that of the rest of the Southern states. Well, except for a few unique things, that is.

Such as at one time having a governor suggestive of dictator Juan Peron of Argentina. Huey “Kingfish” Long rode high in Louisiana from about 1928, until his assassination in 1935. He was a rabble-rousing orator, who, during the Great Depression, coined the slogan, “Share the wealth!” At one time he was seen as a possible opponent for President Franklin D. Roosevelt in the presidential election of 1936 — until his untimely demise. Many were the rumors which swirled around about how “convenient” Long’s slaying was for Roosevelt. But nothing was ever proved.

Beginning in the early 1900’s, a new type of popular music, at first called “jass” and then “jazz,” developed among the black musicians of the New Orleans area (and some notable White musicians, too; google “Emmett Hardy,” and “Original Dixieland Jazz Band” for details on those jazz pioneers.) The popularity of jazz spread north to Chicago, northeast to New York City, and then all over the country. Jazz was originally a rhythmic, high-energy music, played on wind instruments, drums and piano, with the various players taking turns with solos as part of each song.

Probably the best-known jazz musician to come out of New Orleans was the great Louis Armstrong, regarded by many as the Number One jazz trumpeter of all time. But among those with a knowledge and appreciation of jazz history, Armstrong might have to settle for a tie with a White boy from Davenport, Iowa, named Bix Beiderbecke. Their styles were different, and Armstrong lived and performed, and recorded, well into the era of television. Beiderbecke, an alcoholic, died of pneumonia and general neglect in New York City in 1931, age just 28. So it is hard to compare them directly. But it’s worth noting that Louie and Bix knew, liked, and respected each other, and that each held the other’s musical skills in high regard.

Of course, jazz is only the best-known original type of American music to come out of Louisiana. Country music became popular all across the South in the early years of the 20th Century, and Louisiana was no exception to that. But there were some unusual, unique variations.

One of the most unusual was what has been labeled, for want of a better name, “swamp music.” It combines elements of black rhythm and blues, and White country, with a uniquely Louisiana accent.  And the best-known writer and performer of that music, is a man from northern Louisiana named Tony Joe White.

White is 71 now, and has been playing and singing in live performances and on record albums since the 1960s. He IS White, and one-quarter Cherokee, but when you hear him sing, and don’t see him, you’d swear he was black. And when he talks — he sounds the same. In his rural part of the state the White folks and the black folks have accents that are almost identical — or so I’ve been told. Although Tony Joe has never really hit superstar status (sometimes even the most talented performers don’t, for a variety of reasons), he has written and recorded a couple of songs you might remember. One was called “Polk Salad Annie.” The other was “Rainy Night in Georgia.” Brook Benton had the big hit on that one, although Tony Joe’s version was recorded first. And I think was the better of the two. Once you hear Tony Joe White sing, you’d never mistake any other voice for his.

And then we come to the uniquely Louisiana music that has become increasingly popular in recent decades: Cajun.

It grew out of the French folk music that the Acadians brought with them from Canada. It took on certain qualities from the rural Anglo-American music later known as “hillbilly,” then “country.” And it was also influenced by the black music that surrounded the Cajuns in their southwest Louisiana homeland. But, centered around fiddle music instead of the guitar, it took on a lilt on its own.

Around 1900, the first accordians were imported into Cajun country, and in a short time had joined the fiddle in fashioning that unique Cajun sound we’re familiar with today– fiddle and “squeeze-box.”

The names of Cajun musicians of the earlier days are not as well known to Americans as those of jazz, or country: Iry LeJeune, Nathan Abshire, Joe and Cleoma Breaux Falcon, Dennis McGee. The Hackberry Ramblers, named after their hometown, bridged both early and present days. The band was founded in 1933. In the 1990’s it was not only still performing, but with two of its original members still up there on the stage! Luderin Darbone and Edwin Duhon both lived into their 90s — as did McGee. Must be something really healthy about playing and singing Cajun music.

In the more modern era, the names of Cajun musicians like Doug Kershaw, Jimmy C. Newman, Jo-El Sonnier, and the band Beausoleil all will ring a bell for many people. And a black Cajun named Clifton Chenier in recent years developed a fushion music, a combination of rhythm and blues and Cajun, which he named Zydeko. Music from the bayous has moved from being a regional, rural phenomenon, to world-wide fame.

Louisiana cuisine also sets it apart from other states. Crawfish bisque; gumbo; Chicken Creole; blackened salmon; jambalaya; and red beans and rice grace thousands of tables in the state every day. Many of those meals are consumed, and thoroughly enjoyed, by tourists visiting the state.

And I’ve been one of them — twice. In 1966, just after I was discharged from the U.S. Army, I traveled down to Lake Providence, in East Carroll Parish on the Mississippi River in northeast Louisiana, to visit my Army buddy Joe Maggio. He still lives there, by the way, and is one of four Army friends from those bygone days whom I have managed to stay in touch with.

In 1990, I went on a bus tour to New Orleans, which is an American city like no other. No, we didn’t go down during Mardi Gras; that would have been a little too wild for our tastes. But we chomped down a lot of good Creole (and Cajun) food, listened to some great Louisiana music; and got to tour many parts of the city, plus riding through one of the southwest Louisiana bayous in a boat piloted by a genuine Cajun man who looked and sounded the part, with his dark hair and prominent Gallic nose, and his accent that reminded us of that of Justin Wilson, the host of “Cookin’ Cajun” of TV fame in those days.

Which brings me to the final observation I wanted to make about the people of Louisiana: Their accents — plural — are varied and fascinating. For instance, my buddy Joe’s speech is pure plantation Southern, with a certain refinement to it,  the “final r’s” softened out, and a tendency to pronounce words like “parish” with a short “a” sound. People in most of the U.S. would pronounce that word as if it was spelled “perrish.”

I remember talking to a GI during my Army days whom I had never heard speak before. During my three years I prided myself on how I had learned to identify the various American regional accents. So I said, all sure of myself, “You’re from Brooklyn — right?” He looked surprised, and said, “No! New Orleans!” So as we chatted some more, I listened closely, and realized that, sure enough, while his accent may have sounded New Yorkish at first, it was definitely that of a different place.

There are even different accents within New Orleans. For instance, in the White working-class wards, people tend to talk “Yatty,” as New Orleansites term it. As in, “Where yat?”

Then there’s the Cajun accent, which has a certain rhythm to it, a unique way of using words, that once heard, one is unlikely to forget. There is a police show on TV at 10 p.m. Saturday, called “Cajun Justice,” where you can hear that accent — or perhaps a next-parish-over variation of it.

See? Told ya Louisiana was unique.

← The racial spin doctors are busy in Ferguson
Hey, gang! Let’s have a (multi-) party! →

2 comments for “Louisiana: It’s a unique and varied state”