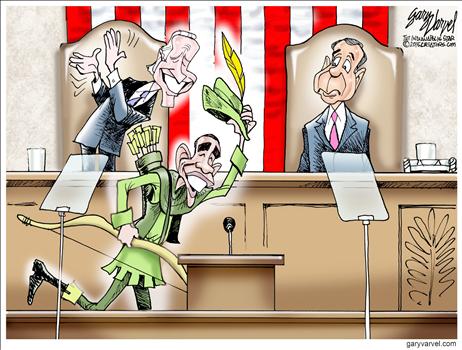 Everybody who likes paying taxes

That’s funny; I don’t hear anybody.

OK, we’re all pretty much agreed: Nobody likes having to cough up a portion of their income and give it to the government. They didn’t like it in Babylon, when government agents would forcibly seize a portion of every farmer’s grain crop, toward maintenance of the army, the bureaucracy (yes, they had one already, even then), and the king. They didn’t like it in Victorian days, when people were taxed by the government according to the size of the closets in their houses (look at some of the houses built 150 years ago and you’ll see some VERY shallow closets!) And we don’t like it now.

And if there’s one thing that every politician knows, it’s that people DON’T like taxes

. Therefore, each of the two parties has its own way of trying to gain political advantage by leveraging the grim reaper-ish IRS.

The Republicans say, “No tax increases! For anybody! Let’s reduce the deficit by cutting spending!” But they seldom get specific about HOW to cut the spending, when it benefits so many people. “Waste, fraud and abuse” reduction is the usual mantra, when the GOP offers one; but no one’s ever proved that eliminating ALL of that (if such a thing were possible) would come within a country mile of bringing the budget into balance, or making a dent in our whopping, $18 trillion plus, national debt.

The Democrats’ retort is: “We’ll cut taxes for the middle class, which is suffering from this recession that George Bush caused. And we’ll make up for that, by raising taxes on those evil, idle, undeserving rich people! They must start paying their fair share!” Never mind that the higher your income is, the higher your tax rate

rises. And the Democrats like to complain about “lobbyists” who presumably force Congress to put “tax loopholes” into the tax code which (of course) only help those evil, undeserving rich people. And by the way, President Obama, just what is the one percenters’ “fair share”? That’s one of your favorite talking points when you’re bellowing at a crowd of goo-goo eyed, adoring college students, but you’ve never explained just what you mean by it. The top one percent pay the highest tax rate of anyone now. Just what is their “fair share”? Such a huge percentage of their admittedly high incomes, that they are left only poverty-level remains?

But of course, “soak the rich” has been the favorite formula for raising money by liberal governments for many years. It’s human nature to, often, feel envy and resentment toward those who have more than we have; to feel that they don’t deserve it, that it’s unjust for them to have so much, when we have — in our opinion — “so little.” You’ve heard all the criticisms: “Oh, his wife done all the work; he never done nothing.” “Oh, he was handed all that by his daddy; he never done nothing to earn

Well, of course, all that or part of it is true in some cases when individuals and/or families have done well for themselves. If you live in a small town like I do you can probably name a few that you know personally.

But I, for one, could name several people who were classmates, or friends, or acquaintances, who started out with no particular advantages, and through their own talents and efforts — yes, and maybe a little luck — have done very well for themselves. The liberals like to harp

on the idea that “the American middle class is shrinking.” Yes, some people have sunk into the working class, at or below the poverty line, through no fault of their own — or maybe through bad choices or mismanagement. But what the liberals don’t mention is, that significant numbers of people who grew up in the middle class, have moved up into the upper class. Maybe not the one percent, but they’ve done well for themselves in this game of making a living. That’s the reason for the “shrinking of the middle class” that never seems to be mentioned.

Of course, hundreds of years ago, monarchical regimes often ground the taxes needed to operate, out of the peasants, with the aristocracy being given a free pass. And of course, that was very unjust, unfair, and downright foolish. But with the start of the Industrial Revolution, came the dawning realization that there was gold

in them thar hills where the “rich” tended to live, and changes in government aimed at grabbing some of that gold for the benefit of the state.

And it affected some identifiable groups, more than others.

Take the Jews, for instance. For 2,000 years, they were driven from pillar to post, out of this country and into that one, only to be forced to repeat the process a couple of hundred years later. The history books tell us that it was mostly because Christians, especially in medieval Europe, tended to hold the opinion, “The Jews killed Christ!” And that was certainly a factor.

But there were other things. The Jews tended to be clannish — to stick together. (And why wouldn’t they, when it probably seemed to them that everyone else was against them?) They were smart — smarter than the average bear, ON average. They were not afraid to work. And they were good at making money

, mostly in business, and managing it well. It’s practically a definition of the kind of person that others, less intelligent, less “work-brittle,” less capable at running businesses, will tend to envy and resent.

Here’s another group: the Mormons, originating in America in 1830. The Mormons moved, en masse, from upstate New York where the church was founded, to Ohio, then Missouri, then Illinois, and finally out to what eventually became the state of Utah, founded by them. They moved almost as often as the Jews, only in a far shorter period of time. The Gentiles (as Mormons began calling non-Mormons, echoeing the Jews’ word for non-Jews) tended to view the Mormons as clannish, as sticking together, as being good at making money

and managing it. And, here’s a recently-discovered fact that most Americans didn’t know: A poll of Utah Mormons showed that their collective IQ  tended to be a little higher than the average for all White Americans. Sound familiar?

So we see that raising the federal tax rate

on the top incomes, will affect the Jews and the Mormons disproportionately. And don’t forget Asian Americans — Chinese, Japanese, Koreans, and Indians, mostly. They tend to be the TOP U.S. ethnic groups, in terms of incomes. Do the Democrats really want to hit these “people of color” with still higher federal tax grabbing? The president’s party always gets all bent out of shape at any hint that “African Americans” are being hit disproportionately by something bad, like murder rates, percentages of prison inmates, low school graduation rates, and the like.

But don’t expect to hear any of that from the Democrats — or the Republicans, for that matter. So for what it’s worth, here’s some advice for them from Old Corporal, masquerading for the moment as a Dutch Uncle:

Stop pretending that the budget can be balanced through nothing but eliminating “waste, fraud and abuse.” Part of the process of balancing it, has to include making cuts in federal programs. Cuts that would make the people who benefit from those programs

, scream like banshees. And it would have to include patient, detailed explanations to the voters, as to why those cuts are necessary, or else we face national bankruptcy in a few years.

for the top earners, cut the rates for “the middle class,” and not wind up back at Square One, or nearer to bankruptcy, than we were before.

A tax increase, to be effective, must hit all levels equally, percentage-wise. Telling the people, “Oh, we’ll just raise taxes on these rich bastards; don’t worry, because it won’t affect you,” is patently untrue. And telling them, “No tax increases for anyone,” is delusional. Sometimes we have to just suck it up, bite the bullet, hunker down, and wait for things to get better.

And last but not least, we need to stop pretending that enough government interference, and enough taxpayers’ money Robin Hooded from one class to another, will finally produce  “equality” in America. Folks, it ain’t gonna happen. This is not an “equality” world. Absent unjust governmental or social restrictions, some will always surge ahead; some will always fall behind. And most will be somewhere in the middle. That’s just the way it is.

To slightly paraphrase something once said by Winston Churchill: ” ‘Equality’ means, ‘We’ll all be poor together.’ ”

← Muslim terrorists understand one thing: Force
Stan and Ollie: Our comics, and our friends →

2 comments for “Politicians are faking on the tax, deficit issues”