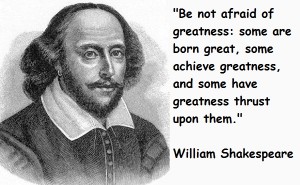 In just about two months — April 23, to be exact — the world will observe a double anniversary of the greatest literary man to ever live on this earth.

William Shakespeare was born in Stratford-Upon-Avon, England, on April 23, 1564. And he died there on the same date, in 1616 — exactly 400 years ago. The Immortal Bard, author of the world’s greatest theatrical plays, of wonderful poetry, of sonnets like no one else has produced, wandered some distance away from his home town during his 52 years of life. But when his end came, he was home again, retired, a prosperous property owner and highly respected member of the community where he was known by one and all — Will, the glovemaker’s son.

And yet, dating back to the 18th Century, a certain coterie of envious, elitist literary — and other — people, have done everything they could to cast doubt on the idea that a “mere provincial,” a man who grew up in the home of a father who made his living by fashioning and selling gloves made of animal skins, could have been the world’s premier writer.

EVER HEAR OF the 17th Earl of Oxford? Not many have nowadays, other than those who have studied Shakespeare’s life closely. Well, this nobleman — real name, Edward de Vere — is the person that the “Oxfordians,” as Shakespeare fans call them, would have you believe actually wrote “Hamlet,” and “Romeo and Juliet,” and “A Midsummer Night’s Dream,” and so on for the 36 plays we are certain were published under William Shakespeare’s name.

Of course, the Oxfordians also point to the fact that Shakespeare never “went to college,” as we Yanks would put it. He almost certainly got a grammar school education at the school in Stratford — virtually every boy in the small town did. And there are scenes in a couple of his plays written 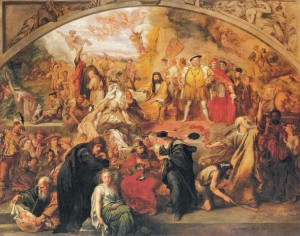 The plays of William Shakespeare

many years later, that suggest his personal memories of how rustic schoolmasters conducted their classes in that long ago time. And some of their amusing personal quirks.

There are other lines in some of the plays that suggest an intimate knowledge of Warwickshire, the county in which Shakespeare and his siblings were born and raised. Details about the type of flora and fauna, peculiar to Warwickshire, which grew in the fields, for example.

William Shakespeare was born to John Shakespeare, a glovemaker, and his wife Mary Arden, who was the daughter of a prosperous farmer from a neighboring community. He grew up in a family of several children, and John Shakespeare and his son Will likely attended some plays put on by traveling theatrical troupes in Warwickshire while the boy was growing up. We don’t know that for a fact, but it seems likely, given the adult Shakespeare’s attraction to the writing of plays, at which he became superior to all others in history.

WAS YOUNG WILL Shakespeare a good student in the grammar school he attended in Stratford? Well, we don’t know that, either. If they had “report cards” or some such, in those days, none of Will’s have survived. And we must remember that, in the late 16th and early 17th centuries, the notion of a “super star,” whose every move and life story must be recorded when he was at the top of his fame, was unheard of. It wasn’t until the years after Shakespeare’s death that the impact of his work on the literary horizon of England, and the world, began to become clear to many people.

The young Shakespeare, when he reached the age of 18 in 1582, appears to have been a typical teenaged boy in one way at least — he got a woman pregnant. Her name was Anne Hathaway, and she was already 26. The bans were only read once in the local church before the wedding, instead of the usual three times. And the couple’s first child, Joanna, was born just six months after the exchange of vows. That was in early 1583. Two years later, in 1585, the Shakespeares became parents of fraternal twins — Hamnet and Judith, named after some neighbors and friends of those names.

And then, in that year, or the next, William Shakespeare simply disappears — to us, anyway. He may have become a rural school teacher, somewhere not too far from Stratford, as some have speculated. He may have gone straight from his hometown, to London, drawn by the “lights of the big city,” so to speak. Presumably his parents helped support Anne and the children while he was absent.

Thus, for the next seven years or so, we do not know where William Shakespeare was, or what he was doing. But, in 1592, it becomes obvious that for at least the latter part of that time, he had been in London, writing poetry and starting his theatrical career. Because another playwright, a man named Robert Greene who, with fellow playwright Christopher Marlowe and others, was a college graduate, wrote a scurrilous attack on someone who is all too obviously Will Shakespeare, in a pamphlet entitled “Greene’s Groatsworth of Wit, bought with a million of Repentance,” which was published after Greene died, per his death bed request.

THE GREENE ATTACK, which sounds as if it was engendered by malice and envy, follows: “… There is an upstart Crow, beautified with our feathers, that with his Tiger’s heart wrapped in a player’s hide, supposes he is as well able to bombast out a blank verse as the best of you: And being an absolute Johannes fac totum,” (Johnny Do-All, in 21st Century terms) “is in his own conceit, the only Shake-scene in a country.”

Translation: “How dare this bumptious provincial Shakespeare consider himself equal to we aristocratic college graduates, as an author or anything else?”

Which may be the actual birth of the “Oxfordian” movement. How could Shakespeare have written history’s greatest plays? He was just an ignorant provincial with relatively little formal education!

How could he have, Doubting Thomases? Have you ever heard of “genius”? There is an old saying (not from Shakespeare, as far as I know): “To a genius, NOTHING is too much trouble.” Geniuses find ways to get things done, to CREATE things, to LEARN things, that lesser mortals would seldom think of.

I’VE ALREADY MENTIONED that no one today knows for sure where Shakespeare was, or what he did, from about 1585 to 1592. For all we know, he could have been a minor functionary at the queen’s court. Or a sailor on a ship that visited other lands. In the case of either of those possibilities, a man with sharp eyes and ears could learn a lot about this world that a glovemaker in Stratford would have known nothing about.

In the years to come, from 1593 until he retired and returned to Stratford in 1613, Shakespeare lived in huge (for the 16th Century, anyway), bustling London where few important things remained secret for long. For a man who was not only a master of literature, but from the scraps historians have been able to uncover over the centuries, also a pleasant, friendly man who enjoyed others’ company, it would not have been difficult for Will Shakespeare to pick up other information about the court, the aristocracy, and so forth.

So everyone who believes that the Earl of Oxford, living at court, wrote the plays which have borne Shakespeare’s name since their first publication, stand on your head. When you really study Shakespeare’s life, the information uncovered by determined biographers in 400 years, you can see that the notion is laughable.

Look at some of the common sense quotes from Shakespeare that we still use today, 400 years later:

“NEITHER A BORROWER nor a lender be.”

“All that glitters, is not gold. (“The Merchant of Venice.”)

“The course of true love never did run smooth.” (“A Midsummer Night’s Dream.”)

“I cannot tell what the dickens his name is.” (“The Merry Wives of Windsor.”)

Sounds like a man from a middle-class family, a man of high native intelligence and a firm grasp on what is practical, doesn’t it? It certainly DOESN’T sound like a pampered aristocrat.

WANT MORE PROOF? Read, or listen to, the lines of working-class “comedy relief” characters in many of his plays. Doesn’t their dialect, so to speak, sound like you might imagine the speech of people who worked with their hands in 16th Century England, sound? It certainly does to me.

After Shakespeare’s death in 1616, his name was not as prominent in England for several years. Then, in 1623, two of his friends, fellow actors, and stockholders in the Globe Theatre, John Heminges and Henry Condell, decided that they needed to collect whatever best copies they could of all Shakespeare’s plays, and re-print them in a book called a “folio.” They wanted their admired friend’s work to survive, in total, and be read and enjoyed by many generations into the future.

Putting together Shakespeare’s First Folio wasn’t easy for Heminges and Condell. A number of the plays existed only in Shakespeare’s personal “foul papers,” or his initial drafts. Others, though available in “fair papers,” or the more finished and polished copies, had errors which had to be detected and corrected.

FINALLY, THE FOLIO was set in type by a London printer, and published — some records say in 1,000 copies, others, in 750. About 233 copies are known to still exist, the overwhelming number in museums. At an auction a few years ago, one copy sold for more than $6 million.

Heminges and Condell believed that one of their friend Will’s fellow playwrights should be invited to write a dedication for the Folio. They chose Ben Jonson, a slightly younger, well-educated playwright who knew the Bard and had reportedly debated him about poetry and theatrics on a couple of occasions, in one of the literati’s favorite London pubs. It was a friendly debate, no doubt, well lubricated with the “special of the house.”

Jonson agreed. He wrote a moving and very learned tribute to his friend Will. And the final words of that piece, said it all:

← U.S. must return to ‘See the good in the world’
Race hustlers scare Disney on ‘Song of the South’ →