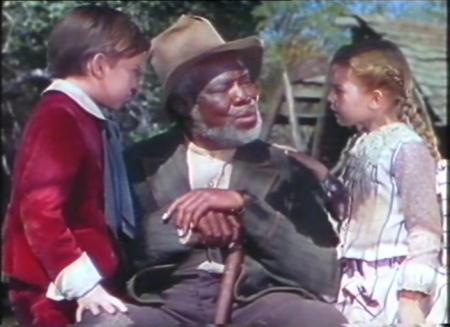 The title of the movie was almost poetic: “Song of the South.” The actors were charming and believable — especially James Baskett as Uncle Remus, who became one of the best-known characters in American literature, partly via the 1946 Disney film based on the post-Civil War Southern writings of Joel Chandler Harris.

People my age loved the movie we had seen as children, with its mix of cartoon and live-action scenes — sometimes, a combination of both. Br’er Rabbit, Br’er Fox and Br’er Bear were like our own playmates who lived just down the block.

And yet, the movie can’t be bought now — legally — on VHS, DVD, or any other movie medium, in this country. You won’t see it on television any more, either, although it used to be a much-loved feature on Disney TV programs.

And why has “Song of the South” apparently gone into “Prohibition status”? Because the Walt Disney organization appears to fear the wrath of the race hustlers who seem to have so many of us intimidated nowadays. Disney has refused to release the movie on DVD in the U.S., or allow it to be shown on TV since its last appearance in 1987.

Yes, it was a musical — and its best-known tune, “Zip-a-Dee-Doo-Dah,” won an Academy Award in 1947 for best song. What few people knew at the time was that it was based on an old Southern song called “Old Zip Coon,” which would set the professional grievance collectors into spit-slinging tantrums if they found out about it today. Another well-known song, “That’s What Uncle Remus Said,” is a good indicator of what an important part that character, played by Baskett (a Hoosier from Indianapolis, by the way), enacted in the movie. He received a special, honorary Academy Award for his performance. It was the first one ever presented to a male African American.

The title song was sung by black field hands on their way to work in the fields of the plantation during the film. No, they were not “slaves”; this movie is set in the years after the War Between the States; they were tenant farmers. As a matter of fact, there is no mention of race anywhere in the movie that I was able to detect, although White actors played prominent roles as the children, and Johnny’s parents (after Baskett and Hattie McDaniel, who played the cook at the plantation owned by little Johnny’s grandmother). Nobody used the word “nigger,” or any of the other racial slang which is absolutely “VERBOTEN” to White people today, according to those who police “political correctness.”

As a matter of fact, the only “bad” characters in the movie are two poor White little boys who clash with Johnny and their own sister, Jennie, over possession of a puppy. When Johnny frustrates them using advice contained in one of Uncle Remus’s stories, Johnny gets into a fight with one of them. When the other picks up a two-by-four from the ground to try to hit Johnny, Uncle Remus happens on the scene, takes the board away from the boy, and sternly lectures both brothers. He is not intimidated by the fact that they are White, and he is black and a former slave. 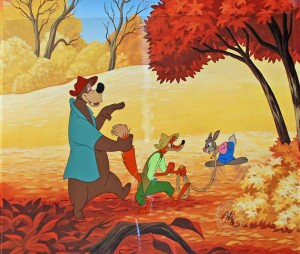 Luana Patten, become good friends with the fascinating, enigmatic Uncle Remus, who loves children of all colors and is frequently telling them “critter” stories which always have a moral. Featured prominently in those stories are Br’er Rabbit, a shrewd bunny who is good at turning his foes’ strengths into backfires that benefit him and make them look silly; Br’er Fox, a sneaking, conniving predator who is constantly scheming to try to catch and eat the rabbit; and the fox’s large, loyal but knuckle-headed friend, Br’er Bear. This was the first major picture to feature both live, and animated, footage — sometimes, both at the same time, woven together magically by Walt Disney’s first-rate masters of the screen cartoon.

James Baskett does one of the most superb jobs of character acting that I’ve ever seen as the old bachelor Uncle Remus (a romance of some kind with the McDaniel character is hinted at, but not pursued very far). He speaks in the “plantation dialect” that many blacks have maintained right up to the present day. But it’s accurate to the time and place depicted, and sounds spot-on appropriate to his character. The three cartoon characters also talk in that “Negro dialect,” to give it a name it would once have borne, and they also sound as if it’s their native “language.” It doesn’t appear meant to ridicule blacks — not to my ears, anyway. It sounds just like it ought to sound.

And in the climactic scene, when Johnny is lying on a bed in his grandmother’s plantation house, delirious and possibly near death from being gored by a raging bull, and his father has rushed home from his business in Atlanta to be by Johnny’s side along with the boy’s mother and grandmother, it is Uncle Remus, who arrives as soon as he can get there after hearing of the attack, whose soothing voice awakens the boy and brings him back to his senses.

Why do the race hustlers dislike “Song of the South,” when it does not present a single black person in a bad light, and features James Baskett as the leading character, earning him that award? Well, because it shows too much “racial harmony.”

Say what? Who could dislike “racial harmony”? Isn’t that what all our politicians say we need in America?

No. That’s not what the race hustlers want. Not on your tintype. (Look it up; I know most of you won’t know what that word means).

The professional racial grievance harvesters DO NOT want to see any racial harmony in a movie either about the Civil War, or about the years just after slavery ended. You see, any implication that many blacks were more or less content with living under slavery (assuming their masters treated them well), and even fought for the Confederacy (a number did), puts a stake right through the heart of their cherished history of the Underground Railroad, of their fantasyland of every single black person in the South being militantly opposed to slavery. And they don’t like a depiction of the two races managing — with some difficulty — to live side by side peacefully after the war ended.

Oh, no! They want to see angry, triumphant blacks, and cowed, guilt-ridden Whites, the former with their feet on the necks of the latter. Blacks newly elected to the state legislatures of the South should be seen righteously sweeping away the hateful remnants of slavery, of the plantation system, of the ante-bellum South.

They don’t like, even a little bit, this movie that shows the races coexisting amicably, helping each other, not playing “the race card” with each other. Of course the “race card” hadn’t been invented yet, in 1946. The race hustlers are applying it, retroactively. “Song of the South” will NOT be grandfathered in, they scream. And they didn’t like the film “Birth Of A Nation,” from 100 years ago, either. Why? Because it showed the blacks asserting their newfound “freedom” and the Whites fighting back with the founding of the Ku Klux Klan. The race hustlers remind me of the Irishman who, when washed ashore on a desert island, waded out of the ocean onto the beach and shouted, “Who’s the giverment here? I’m agin’ ’em!”

The Disney corporation — and a lot of other Americans, too — need to have a talk with these race hustlers, from Jesse Jackson and Al Sharpton, right on down the line. They need to tell them, in no uncertain terms: “Look: We fought a Civil War to free you from slavery. We passed a new amendment to the Constitution guaranteeing your right to vote. The Supreme Court ruled, in the 20th Century, that public schools could not be segregated by race. The Congress passed, and the president signed, Civil Rights acts, targeted specifically at protecting you African Americans’ rights. The federal government has instituted numerous ‘social welfare’ programs to benefit low-income Americans. Your people have benefited from them in larger percentages than anyone else. Because of these many programs of the federal government, many, many black people have done far better economically than their parents did.

“Yes, slavery was wrong. ANY slavery is wrong. It’s been gone from our shores for 150 years now. You need to GET OVER IT! Stop pretending that you are all still laboring in the cotton fields in Mississippi and Alabama! You dominate professional sports in this country, with many members of your race earning huge salaries every year. You have made enormous employment strides in the TV industry. There are black CEOs, black doctors, black executives in numbers that would have astounded your grandparents. You’re doing better than you ever have. Hell, one of your people was elected president of the United States in 2008!

“And don’t forget this: If the chiefs of some African tribes hadn’t sold your ancestors to Arab slave traders, 300 years ago, and those ancestors hadn’t wound up in what was to become the United States, you’d be living in Africa now! Think about that.”

So Disney has forbidden any DVDs of “Song of the South” to be manufactured or sold in the U.S. I often think about that after watching MY DVD of the movie, occasionally.

What’s that you say? How did I get a DVD when they’re forbidden in this country? Well, as an old reporter, I don’t reveal my sources. But google “Song of the South DVDs”, and you’ll be on the right track. Hope you enjoy it! Zip-A-Dee-Doo-Dah!

← ‘By his works, you shall know him …’
‘Poor Richard’ was a millionaire in wisdom →