Barack Obama’s administration pulled off a tremendous coup Sunday when it finally rubbed out Osama Bin Laden, the evil master of the 9/11 attacks that killed 3,000 Americans 10 years ago. This piece of sub-human scum had evaded capture for all of those 10 years — although it turns out that our military was a lot more aware of him, and trying a lot harder to find him, than they ever let on. 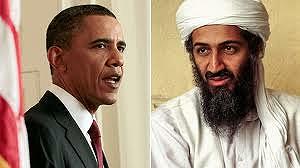 Leader of the free world and leader of world terrorists.

But that’s good. The radical Islamists are our sworn enemies. Whatever we can do to confuse or mislead them, until we’re ready to strike like a hot sledgehammer, is acceptable, in my opinion. War ain’t pretty, folks, and sometimes you have to do things that wouldn’t “hold up in a court of law.” Well, that’s OK, too. Lawyers aren’t running the world — thank God. Not yet, anyway.

Now, however, Obama is at great risk of losing all that political capital he gained in a millisecond by doing the right thing. He’s about to gin up a whole new reason for people to suspect his motives and veracity.

Photos were taken of the dead Bin Laden, reportedly showing two bullet holes in his forehead and his left eye blown away. Videos were shot of the body, the scene, or both, also. Since Sunday evening when the news was announced and countless U.S. downtowns erupted in explosions of cheering and glee, the Obama administration has told the American people that it was “weighing” and “considering” whether that incontrovertible evidence should be made public.

The first time I heard them say that on the news, I thought, “They’re gonna sit on it. They’re gonna try to keep anyone from seeing it.” Turns out I was right. Wednesday afternoon, the White House announced that the photographic evidence of Bin Laden’s death will remain forever shielded from prying eyes — that is to say, OUR eyes.

Obama’s excuse? We don’t want to “further enflame Muslim public opinion.” We want to show we’re “better than that,” as radical Muslims have delighted in posting videos in cyberspace that show them sawing the heads off Western victims they have kidnapped. I think I heard Obama’s mouthpiece, his press secretary, tell Wednesday’s press conference that the president said in defending this cover-up, “We don’t have to spike the ball.” He might pass that advice along to all those NFL running backs who bust it every time they score a TD; or NBA players who glory in those King Kong slam dunks.

But I digress. I’m talking about these pictures of Bin Laden’s filthy corpse, after he got what has been coming to him for 10 years or more. I think some people who support a cover-up of the photos, try to justify it by saying that showing them would “put U.S. service personnel in harm’s way” where they are currently fighting Muslim terrorists in Iraq and Afghanistan. Are they kidding? Do they think for a minute that these guys aren’t “in harm’s way” every moment they’re over there, anyway? And how many of those soldiers, Marines, airmen or sailors would say, if you asked them, “Oh, goodness, don’t show those pictures! These ragheads might get mad and shoot us, or blow us up!” Ha! These men and women are trained to deal with threats like this, and I suspect they’d say, “Show the American people the pictures, Mr. President; we can take care of ourselves!”

Then there’s the argument that Bin Laden’s death photos are “too gruesome” to be shown publicly. That’s too ridiculous to even merit a comment. Again, this is war. This man was a mass murderer; he got just what he deserved. We want to see his corpse, with his head disfigured and — hopefully — a look of terror frozen on his despicable features at the moment of death. Prove to us that he’s really gone, Mr. President. I, for one, don’t trust you and your administration when it comes to things like this. I don’t trust your motives, and I think you’re all too ready to want to “reach out” to Muslims, no matter what they do to us. Your father was a Muslim; you lived in a Muslim land for several years as a child. That, along with several other things, makes me very suspicious of your willingness to be open and above board when it comes to dealings with radical Muslims. I suspect that you still hold a secret feeling of kinship with them, even though you’re apparently a Christian now.

And besides, Mr. President, do you think for a New York minute that you’ll be able to keep those photos and that video under wraps for very long? Someone will leak them, if you refuse to make them public voluntarily. For all I know, some version of them may already be on YouTube, even as I write this. You’re going to look pretty silly if they get disseminated worldwide, instead of officially released by the Obama administration.

But if it’s the latter, you’ll spoil your big coup by winding up with egg on your face.

And worst of all, Donald Trump will be demanding to see them, too!