I contend that for a nation to try to tax itself into prosperity is like a man standing in a bucket and trying to lift himself up by the handle. — Winston Churchill

If someone had invited you to a tea party a few months ago, you’d probably have said, “Borrring! I have a previous engagement! No, thanks.”

But what a difference the passage of a little time and the change in policies of a new president can make. This coming Wednesday, millions of Americans will be going to what the British might call, “High Tea.” 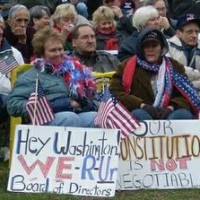 That’s TEA as in, “Taxed Enough Already,” which has become the war cry of a loosely coordinated, nationwide outpouring of more than 1,900 rallies designed to “send them a message” in Washington, D.C., about ballooning federal deficits, looming tax increases and a general feeling that the views of the average American are being ignored by President Obama and the Congress.

These aren’t likely to be protests like the ones we’ve become accustomed to ever since the 1960s. No rag, tag and bobtail howling about “discrimination” and “poverty.” No smart-aleck college kids, screaming their hatred of “the establishment.” This is going to be Joe and Jill Average Taxpayer, multiplied by many hundreds of thousands.

In this Internet age, it’s a measure of how widespread this group of protests will be by the fact that there are more than 1.5 million places on the web where you can find out about them. The patriots of Dec. 16, 1773, who dumped overly-taxed tea into Boston Harbor at the original “tea party,” would have loved that kind of publicity. 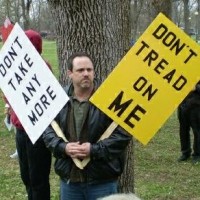 Foobar was kind enough to send me a long list of websites where you can gather information about when and where and how to participate. I will post those names on the regular Forum. But one of them, www.taxdayteaparty.com, has detailed information pertinent to where and when tea parties will be held in Indiana Wednesday, April 15:

Those within fairly easy driving distance of our area are:

Note that the event is to be held on April 15, tax deadline day; and that with the exception of Louisville, where organizers apparently are aiming at the noontime lunch crowd, the rallies are scheduled at times when most working people will hopefully be finished with their day’s labors and able to attend.

Leftist websites have accused Fox News of being a prime mover in organizing the TEA parties; Fox in turn has accused various liberal organizations of trying to infiltrate and disrupt the protests. But it seems more likely that while Fox and conservative talk radio host Rush Limbaugh may have encouraged such a movement, once put in motion it “just growed like Topsy.” There are protests scheduled in every state — 14 in Indiana alone.

It will be interesting to see how the media report on the protests. Fox and other right-wing media will pronounce them a huge success, the cutting edge of a tidal wave of dissatisfaction with the way the president and Congress are handling the current economic crisis. The liberal media will claim that turnout was far, far, FAR below expectations, that only extreme right-wing Republicans turned out, and that it was overall an embarrassing failure for the organizers.

No matter. One thing is sure: On Wednesday, many Americans are going to do like the fed-up news anchor did in the movie “Network”: Open their windows, so to speak, and yell, “I’m mad as hell and I’m not going to take it anymore!”