He called himself Bojangles. But that wasn’t his real name, you see. That name seems to be lost to us, over all these years. He was a White man from a poor sharecropper family in north Louisiana, a man who hadn’t been blessed by either fortune or Mother Nature. Except for two things: He could chat up a storm with anybody, one or a hundred, and make ’em laugh; and he was gifted with the best natural talent for dancing anybody’d ever seen.

Really. That’s why the rumor got started that he was a black man. Because, you see, so many of us Americans think that if a man is poor, and a great dancer, then it follows as the night the day that he must be black. But not this one.

This old cracker man took his nickname from a great black dancer, all right: Bill “Bojangles” Robinson. You’ve seen him tap dancing with Shirley Temple in those old movies from the 1930s. Our Bojangles used to see him as a young man when he’d take his bride to the local Bijou, when they could scratch up the 20 cents to go, that is. But then, she had a baby boy. And the baby died. And she died giving birth to him. And Bojangles, he just went to pieces. Thought his life was over. Left his daddy’s farm where he helped out with the plowing and planting and harvesting. Drifted off … Just kind of lost himself in the South.

This young man — well, he was young then, remember — he had to live somehow. Dancing came as naturally to him as breathing, and he started learning that if he’d go through his hoofer’s routine for a crowd, wherever he could find them, people would throw money. He started living, hand to mouth, you might say; but at least he lived.

Young Bojangles, who started calling himself that about this time, he drifted around, all over the lower South, and even out to California, riding the rails, dancing and entertaining folks. It was an uncertain life, a perilous one — he got beat up a few times, robbed of what little he had. But he kept on. His path was set, now.

He woke up under a railroad bridge one morning — and here was this big old German shepherd, licking his face. Just showed up, from somewhere. Like he knew Bojangles needed somebody, and it might as well be him. 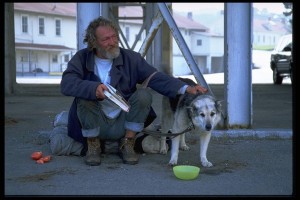 Bojangles adopted him; shared every meal with him; shoplifted a collar for him out of a pet store in some town. Since he’d already borrowed Bill Robinson’s nickname, he figured he might as well appropriate the rest. So he called the dog “Robinson.”

And so, the years passed, with Bojangles and Robinson knocking around the South, the cracker man dancing and joking for the folks, the dog doing his own version of “dancing” alongside him (Bojangles didn’t teach him that; Robinson just decided he wanted to get in on the act). Bojangles’ hair and beard got gray; Robinson started showing signs of age, too; not as spry as he once was.

But Bojangles didn’t have to worry about anyone beating him up again. No, sir. Robinson would take a ham out of their leg, or their hand, or anything else he could reach, if anybody tried.

So when a drunk got belligerent with Bojangles on a city street late one night, Robinson took out after him, chased him across the street … and, there was a car coming, and Robinson didn’t see it in time, and …

Bojangles never got another dog. Didn’t want one, really. Nobody could take Robinson’s place.

More years passed. And then it was 1965. And on the Fourth of July, Bojangles was in New Orleans, and so was a young country singer-songwriter named Jerry Jeff Walker.

Jerry Jeff got drunk that night, tried to pick up a “lady of the night,” got collared by the New Orleans cops, thrown in the parish jail.

There was a high-profile murder that day, so the police rounded up all the street people they could find and jailed them, too. Including Bojangles.

And, well, let’s go back to that jail cell, that night, and see what happens. Just climb in Old Corporal’s Time Machine here — you all in, seatbelts buckled, all that stuff? Good; here we go!

OK, here we are in the cell — four or five guys in here. You notice they’re all White. Jail cells in the South were still segregated in 1965. We’ll be flies on the wall; they can’t see or hear us. Let’s listen:

Poor old Bojangles gets all choked up talking about Robinson; starts crying in his beard. The other guys feel bad for him — you can tell that by looking at them. Finally one of them says, trying to distract him, “Please, Mr. Bojangles, how about doin’ one of your dances for us?”

That was an invitation Bojangles never could resist. He wipes his tears off, gets up, starts humming a tune, goes into a tap number, then a soft shoe, shows ’em some Charleston steps from the 1920s, goes stiff from the waist up and starts doing an Irish jig …

And … one of the guys grabs Jerry Jeff’s arm, his eyes big as saucers, not making a sound, and he points. And there, dancing right next to his earth-bound master, is Robinson, jumping and cavorting, his eyes all bright with excitement, having the highest old time you could imagine. And Bojangles keeps dancing, first one style, then another, and if he sees Robinson, he doesn’t let on.

And gradually all the booze they’ve drank that day, and the lateness of the hour, and the hypnotic effect of watching the dancing, gets to Jerry Jeff and those other guys, and one by one they all fall asleep.

And when they wake up, when the sun is coming up and the warder’s going to be telling them to get ready for court soon — why, Bojangles is gone, and Robinson is gone. And on the floor is an old worn-out pair of shoes, and a ragged old shirt and pants. And a stolen dog collar.

Maybe old Robinson missed his buddy so much that he went to bring him home.

(Lyrics are from “Mr. Bojangles,” Copyright 1968 by Jerry Jeff Walker.)

(Jerry Jeff wrote and recorded the song in 1968, using his experience with meeting Bojangles as the basis. The Nitty Gritty Dirt Band had the biggest hit with their cover version of “Mr. Bojangles.” It was also covered by Bob Dylan, Sammy Davis Jr., Frank Sinatra, Harry Belafonte, Elton John and Nina Simone, among others. Jerry Jeff has told in interviews about his meeting with Bojangles, but obviously the magical ending, and the biographical details, are figments of Old Corporal’s imagination. But, heck, it COULD have happened that way!)

← Show us the Bin Laden death pictures, Mr. President!
Israel won’t give back the West Bank →