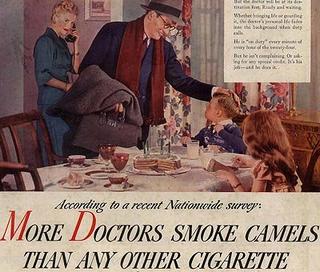 If you remember that cigarette slogan, you must be as old as I am — or close. There must have been 100 different magazine ads depicting some Hollywood star or famous professional athlete, smiling broadly, Camel cigarette cocked between index and middle fingers, right hand. That was the accepted way of holding a “fag,” as young working-class guys called them in those days. Hold it any other way, and people would look at you funny.

It’s probably hard for young people nowadays to understand, in this anti-smoking age when no one has a good word to say about tobacco, what a unique part it played in our culture.

Oh, we knew cigarettes weren’t good for us. Why do you think we referred to them cynically as “coffin nails” and “cancer sticks”? Anyone who remembers an old country song from the 1950s called “Smoke, smoke, smoke that cigarette” knows that smoking was something a high percentage of us did. But we knew it was probably going to kill us some day. The second line of that song was “Puff, puff, puff it ’til you smoke yourself to death! Tell St. Peter at the Golden Gate that you hate to make him wait, but you just gotta have another cigarette.”

So when the famous surgeon general’s report came out in 1964, telling us that, surprise, surprise, smoking was an extremely unhealthy pastime, we werent’ REALLY surprised. Smoking and the fact that it was unhealthy had been the 800-pound gorilla in the room, that everybody pretended they didn’t see, for many years.

There were a whole bunch of things that people — well, mainly young working-class males — did while smoking cigarettes that formed sort of a mini-culture of puffers.

For instance, blowing smoke rings. I smoked for a while, many years ago, and I became pretty good at sending out those round smoke signals. How did I do it? Folks, that’s like trying to tell somebody how to carry a tune. You can either do it, or you can’t, and if you can’t, it’s very hard for someone else to teach you how.

Young, beginning smokers sometimes would hold a lit cigarette upright, then move it quickly up, then down. If you were good at it, you got so you could produce a smoke ring that way, too.

Guys, when smoking outside and finishing their cigarette, seldom just dropped the butt where they stood and went on. If they dropped it, they would step on it. Or — and many young guys got good at this, through practice — you would “flip” the butt with your thumb and index finger. Distance counted there, and also the ability to hit something with it, or better yet, flip the butt right through a small opening.

One of the most “uncool” things you could do with a cigarette (a non-filter one) was to stick it too far into your mouth on first entry, thereby wetting the paper excessively and messing up the tobacco in the inner end. The phrase that described that blunder is “nigger lip.”

Guys would talk about taking a “drag on a fag.” That meant a puff on your cigarette. Those who rolled their own — there were still a number of those around in the 1950s — were often very agile, almost artistic, in pouring the tobacco into the paper, twisting it, and sealing it with one practiced horizontal lick. Another smoker temporarily bereft of cigarettes, might ask one of these “roll your own” guys, “Have you got the makins’?”

Other cigarette talk:
— “What kind you smoke?” “O.P.s.” (Other peoples.)
— “Three on a match — bad luck.” In those days, some guys still carried old-style kitchen matches that would strike on anything reasonably rough — like the seat of your pants, the bottom of your shoe, or, for the really skillful, from a swipe with your thumbnail.
— “Think I’ll butt this” (knock off the ash, then save the butt for later. That was often for teenaged smokers on a limited budget.)
— “French inhale.” That was one cigarette trick that girls sometimes did, I think because they thought it looked rather elegant. You drew the smoke into your mouth, not inhaling it; then let it drift out again as you breathed in through your nose. If you did it right, the smoke made a loop up into your nostrils.

Speaking of inhaling, no self-respecting young male smoker would just draw the smoke into his mouth, then blow it out again. That was considered sissy. You drew the smoke down deep into your lungs, then blew it out in a long, straight stream. The smoke wouldn’t cooperate with you that way if you didn’t inhale it deep. “Mouth smokers” who didn’t inhale just blew out a shapeless mass of smoke. Very uncool.

Blowing the smoke out through your nose was also considered “cool” — or better yet, through both mouth and nose. I’ve seen a video clip of Hank Williams III smoking, and I noticed that he does that.

I had an uncle who was a typical smoker of his generation — had one lit most of the time. I remember one of his younger sisters saying once, “He would take one of those big, long drags, then start talking, and it seemed like 10 minutes later there was still smoke coming out of his mouth.”

Of course, there’s no doubt that the much smaller levels of smoking in today’s society means that we’re much healthier. Nobody with a permanent yellow stain between their index and middle fingers from the constant presence there of cigarettes is likely to be a picture of health. And there were many men — and some women — who had that stain.

Since smokers also tended to be drinkers, they often managed to burn themselves up by falling asleep, drunk, with a cigarette in their hand. That happened to a cousin of mine.

One thing we didn’t realize about the dangers of smoking was how second-hand smoke could harm those near it who were non-smokers themselves. Look at an old film of a meeting of the Chamber of Commerce or a service club having lunch, and see how the smoke was a constant presence in the air. A non-smoker sitting in the midst of that often could wind up as unhealthy as a three-pack-a-day puffer.

So there’s little doubt that our current anti-tobacco crusades are leaving us healthier, and adding to our lifespans. Just for comparison purposes, look at the lifespans of men in Russia. They smoke heavily, and drink so much vodka, that they average only 59 years old when they die. American men, smoking much less nowadays, tend to live into their 70s.

But no bad habit is totally without its own culture, which adds its bit to the overall American mosaic. Smoking as a widely practiced habit was bad for a lot of people. But it left a legacy of rituals that are worth recalling. These are the ones I remember.