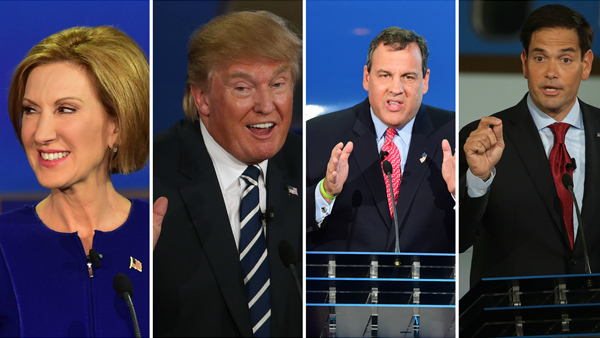 Will they blow a golden opportunity?

The election clock is moving on, with less than a year now before we go to the polls and elect a new president of the United States.

In this year of the outsider, the non-politician (witness Donald Trump, Dr. Ben Carson, Kentucky governor-elect Matt Bevan), there are still many people who are convinced, utterly CERTAIN, that Hillary Clinton, weighed down with an ex-president husband of very questionable morals (albeit he was a pretty good chief executive when he could keep his zipper closed); the Benghazi scandal; the e-mails scandal; and other scandals related to Bill Clinton’s time as governor of Arkansas, AND as president, is going to simply waltz into the White House, with not a mark on her, without even breaking a sweat.

And those people are mostly Republicans or independents who can’t STAND Hillary Clinton. They are expressing their fears, and their total lack of faith in the American people, to make the right choice.

OK: LET’S LOOK at the facts. Among the White majority in this country, Barack Obama is probably the most unpopular president since — well, probably since Richard Nixon just before he resigned over Watergate. The economy has not recovered as well as it usually does after a stock market crash like the one in 2008. The American people handed control of both houses of Congress to the Republicans in the off-year elections last year (although they’ve been very disappointed since then at the GOP’s failure to do much to stop Obama’s brazen seizure of the power in Washington). The voters were sending a signal by that vote — if the Republicans don’t fumble around and drop the ball, as they sometimes do.

Such as in the GOP debates, “B” team and varsity, that were held last Tuesday night in Milwaukee. Senator Rick Santorum proposed doing away with the Veterans Administration as we now know it. It seems to me that another debater seconded that motion, in some way. Sorry, I wasn’t taking notes, so I don’t remember which one.

If you’re a veteran of the U.S. military, as I am, and you’re fully covered medically by the VA health-care system, as I also am, just think about that. He wants to “privatize” the VA. That word, “privatize”, often scares those of us who are not people “of means,” who have to rely on VA health care, in this case, rather than become embroiled in the godawful mess that’s ObamaCare. Check the bank account of anyone who says, “We should privatize the VA,” or, “Social Security is not sustainable,” or, “Why should the taxpayers have to subsidize public transportation so people can ride cheap? Let ’em buy a car, like I did!” and you’ll find someone who is well-heeled and doesn’t really need the VA, or Social Security, or public transportation. “I’ve got mine — sorry about your luck, peasant.”

When a Republican presidential candidate makes a careless statement like that, the Democrats play it as gleefully as a Saturday night fiddle. They love it: “Evil, elitist Republicans want to hurt the American middle class, abolish the VA, Social Security … ” (fill in the blanks).

NEVERTHELESS, THE STARS and the laws of probability, and the condition of the country, all cry out, “Republican victory in 2016!” If you go all the way back to 1952, when Old Corporal was just a pup and Dwight “Ike” Eisenhower was elected president, breaking a string of five straight victories by the Democrats under Franklin Roosevelt and Harry Truman, you know how many times the same party has won the White House three times in a row? Once. George H.W. Bush, who had been Ronald Reagan’s vice president, followed him into the presidency in 1988. Then he was ousted after one term, by Bill Clinton. It just doesn’t happen very often, folks. Before 1988, it had last happened in 1928 — Herbert Hoover in for Calvin Coolidge. Of course, the Great Depression put an end to that 12-year run for the GOP. Of course that doesn’t count the 20-year Roosevelt-Truman reign, but that was a special case, what with the Great Depression and World War II.

But — and this is a bigger “but” even than one you’re likely to see at Wal-Mart — the Republicans have a way of kicking away golden opportunities. Or of nominating someone who contrasts very unfavorably, age-wise or otherwise, on TV with the Democrat nominee. Remember Robert Dole, and John McCain? Or assuming, during the last few weeks of the campaign, that their candidate is “home free,” and can now campaign as if he’s got the presidency in the bag. Remember Mitt Romney?

Of course, some of the present Republican candidates do not fit those descriptions.

For instance: At present, self-righteous, naive leftist students, mostly black ones, are taking over college campuses, rioting, protesting, all over the country, on the usual vague charges of “racism,” minorities being “under-represented” on faculties, ad nauseum. They are “black,” so by definition, they are “oppressed,” is their mantra.

THE SILENCE FROM the White House on this issue the past couple of weeks has been deafening. Barack Obama is not about to denounce any of “his people,” unless they might be African Americans who are conservatives and dare to vote Republican.

But I’d say we can look for Donald Trump, especially, to speak out about all this, and to insist that a president of the United States has to take a stand when major campuses all over the country are in turmoil. I doubt if “The Donald” will counsel staying calm, negotiating with the rioters, kowtowing to them with confessions of “White racism,” and so forth. More likely he will say something like, “They wouldn’t be getting away with all this crap if I was president!” And they probably wouldn’t be. Unless “The Donald” turns out to be one of the guys who talks a good fight, but then fades in the stretch.

Of course, he’s got to get elected president before he can do anything about the college turmoil, or anything else. Besides bloviate about it, of course. And lay all his GOP rivals to shit, every change he gets.

Which brings up another thing about Trump, and to a lesser extent the other Republicans seeking the presidency. Remember Ronald Reagan, and his 11th Commandment, “Thou shalt not speak ill of any other Republican”? They seem to have forgotten that piece of very pertinent advice. Hey, fellows, don’t you know that calling each other everything but a White man, on the campaign trail, just gives more ammunition to Hillary and her coterie of steely-eyed win-at-all-costs progressive Marxists? Don’t you have any sense of the big picture, the long view, the winner’s trophy, the Holy Grail? Can you say, “Winning strategy”?

AND ON FRIDAY night, this horrific Muslim terrorist attack at varied locations in Paris, France, burst unexpected onto the scene. Except that the French, and everyone else, shouldn’t really be very surprised. They and many other Western European countries over the last 50 years or so, have allowed hundreds of thousands of these Muslims to enter their countries as immigrants. A “Fifth Column,” right under the Europeans’ noses, ready to pounce whenever they think the time is right. Stupid Europeans, thinking first of taking in these “poor, homeless refugees,” instead of placing the safety and well-being of their own people ahead of all other things. Stupid American leadership who did the same thing, although not in the numbers that the Europeans have. Not yet, anyway.

And this could be the winning hand for the Republicans — if they have enough sense to play it. I’d say that if Trump trumpets, Carson speaks calmly but movingly, Carly Fiorina enunciates so clearly and pointedly as she always does, Ted Cruz states the case in no uncertain terms in his usual style, and what they say about this is, in essence: “This brazen attack on innocent civilians is a declaration of war, in the same way that the Japanese attack on Pearl Harbor was. If I am elected president, and this attack has been allowed to stand, I will begin immediate actions to assure that ISIS is wiped from the face of the earth, along with all the women and children from ISIS families, because as Oliver Cromwell once said about dealing with Irish rebels against British rule, ‘Knits breed lice.’ ” If they address this in those terms, I’d say the Republicans will win the presidency in a walk.

Oh, Hillary Clinton can cite her experience as secretary of state, you say? Hey, GOP, keep your wits about you and keep reminding the voters about “Benghazi.”

Urging the annihilation of not only terrorists, but also of their families, is inhumane and barbaric, you insist? Did we worry about things like that when we dropped the A-bombs on Hiroshima and Nagasaki? Did the British concern themselves about civilian deaths when they firebombed Dresden?

But it brings results. It’s how we rid the world of Hitler, and Tojo. Desperate diseases require desperate remedies. “Measured” responses aimed at “containing” sub-human scum like the Muslim terrorists, are the kinds of things that Barack Obama advocates and utilizes.

That should be enough to disqualify them from being considered any kind of a solution.

So there it is, Republicans. It’s yours to win — if you don’t blow it.

← We all can choose: Faith, or cynicism
Does America need The Man With No Name? →

1 comment for “GOP can win this presidential race — IF …”