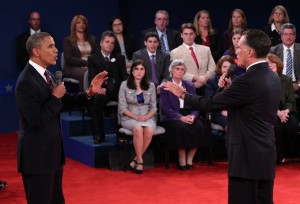 Who’ll win in the third one?

The third and final presidential debate for 2012 is now history. President Obama came across as much more aggressive than he had in the first debate — more so even than in the second. But at times he sounded, and looked, peevish, and he made a few remarks which appeared aimed at “dissing” Gov. Mitt Romney as uninformed and naive about world affairs, the topic of the debate.

Romney, on the other hand, may have disappointed his supporters by not aggressively pursuing Obama on the Benghazi question: What did the president know about the attack which killed four Americans on Sept. 11, and when did he know it? However, a comment e-mailed to a news commentator by a Romney aide during the debate indicated that Romney intentionally did not bring it up, in order to appear presidential, and not a George Bush clone who, allegedly, wants to involve us in overseas conflicts.

My take on the debate? A win for Romney. But then, I’m biased, as you’ll see as you read on in this article.

In the first two debates, we learned that Mitt Romney doesn’t have horns and a tail, or wear a Klan hood, or sleep with six wives. And we also learned that Barack Obama can talk a great game before an adoring crowd, but loses his magic quickly when faced with an opponent on the same stage who isn’t afraid to say, “That isn’t true, Mr. President,” and to cite facts and figures to back up that statement. 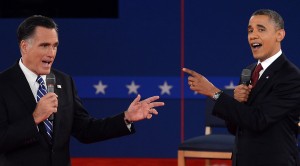 Mano a mano in the arena

The president could have phoned in his performance in the first debate; it wouldn’t have been any less effective than it was with him there, physically. He did better in the second one, but it’s my belief that Romney got a narrow victory, anyway. All this talk by liberals about what a great debater Barack Obama is, turned out to be so much fiction — like a lot of things about him.

People who know me personally have been surprised — and some displeased — at the stand I have taken during the 2012 presidential election season. After all, I’m a Democrat, by family history and, so far, inclination. “Why are you supporting that damn rich man Romney?” is, perhaps in not exactly those words, the way some of my more liberal Democratic friends have voiced their criticism of my choice. One elderly attorney I know, who has a supercillious, looking-down-the-nose personality, asked me, “Why don’t you like President Obama, Wayne?” in a tone that said as sure as if he’d pronounced the words, “You don’t like him because he’s black, you racist!”

Well, the liberals can think what they want about those of us (a majority now, according to the latest polls) who don’t want Barack Obama re-elected. I guess when the president is black, you’re not allowed to think that his policies have been disastrous, that he’s not the right man to run this country, that we made a huge mistake when we elected him. If you oppose a black president, and you’re White, then you’re (all together now, one-two-three!), a “WHITE RACIST.” If you’re black and you oppose him (think Congressman Allen West, for example) you’re an “Uncle Tom,” an “Oreo,” a “race traitor.”

I suspect that a sizeable proportion of the 43 percent of White Americans who voted for Barack Obama in 2008 did so because of the fear of being called “racist” if they voted against him. Here was our chance to show that we’d repented of our sins. He was going to be our “first black president.”

And I have no problem with that fact. But Obama was the wrong black man.

You see, our first black president should have been above reproach. He (or she) should have been born in the continental United States, into an intact family (poverty? fine! But the first black president should have overcome that poverty the classical American way, by hard work and striving). He or she should have had a hard-working mother and father who loved and guided their child, disciplining when necessary, protecting always, until the child was ready to go out on his own. Which should have been, to some college or university other than Harvard or other Ivy League institutions, which are often a red flag to the conservatives who make up about 40 percent of our population.

The first black president certainly could have been a liberal Democrat — or a conservative Republican, for that matter. But he, or she, should have spoken the language of self-reliance and principled conduct. In short, if our first president had been, say, Herman Cain, or Clarence Thomas, I don’t think the last four years would have been nearly as strife-ridden as they’ve been in this country.

But Barack Obama arrived bedecked with red flags. Broken family; black father who deserted his White wife and ran off when Barack was very young; extreme leftist views shared by both parents; a Muslim stepfather whom his mother also later divorced; several years of his young life spent in a foreign country which is heavily Muslim; heavy associations with murky, extreme left “intellectuals” during his formative years. I could go on and on, but you get the point. A single mom; a tendency to blame all the world’s troubles on White people; leftist political views that go beyond just being a liberal Democrat; personal mannerisms that rub a lot of White people the wrong way, such as the swagger, the stentorian bellowing like a Negro preacher in the Deep South when addressing crowds of his adoring followers, a certain cockiness  in his demeanor (OK, go ahead and call me “racist” for saying that; I couldn’t care less.) If you’re trying to gain the votes of people of a different race, don’t confirm all the negative stereotypes at least some of them may hold about YOUR race.

But our news media fell madly in love with Barack Obama, was careful not to vet him very thoroughly, and he had a very weak opponent in Sen. John McCain, so he sailed in without very much trouble. I think our younger voters, especially, thought they were putting Michael Jordan or Barry White in the White House: Mr. Cool and Black, with a smile like a spotlight and major league orator’s skills.

I believe the last four years have showed us that we made a big mistake. Hillary Clinton would have been a good president, in my opinion; but the Obama Madness swept everything before it. When it comes to much-desired “firsts,” apparently race trumps gender, every time.

Obama has been ineffective in getting us out of this economic trough we’re in; he shoved Obamacare down our throats, without a single Republican vote (when the Social Security Act was first passed in 1935, significant numbers of Republicans supported it); he appears determined to “take America down a peg,” presumably to pay for our sinful White racism, colonialism (we never had any colonies as Europeans understand the term), and our general success. I think his returning, again and again and again, to this claim that American “millionaires and billionaires” are not “paying their fair share” in taxes, is simply an extension of his ideological belief that all the world’s problems are the fault of White people. I guess he thinks all wealthy people are White, and therefore, guilty.

There are facts and figures which make the case for defeating Obama, too. Gas prices are, on average, more than twice as high as they were four years ago. Food prices are higher — in many cases, MUCH higher. The continued refusal of the Fed under Ben Bernanke to raise interest rates even a fraction is leaving people who count on some earned-interest income to make ends meet, sorely stressed. For instance, the interest I earned on my savings account on Sept. 30, 2012, was only 8 percent of what I earned on Oct. 1, 2008, and the principal was slightly higher this year than it was four years ago. My retirement investments are right now paying 26 percent less interest per month than they were four years ago, on virtually the same amount of principal.

Speaking of retirement income, we recently learned that the Social Security increase for next year will be only 1.7 percent — one of the lowest since annual cost of living raises were established by Congress in 1975. For the first two years of Obama’s term, we received no increases at all. For this year we got 3.6 percent — not bad, but it was “playing catch-up.” Now I realize that the president does not decide what increase, if any, retirees get. But I think it’s significant that we went two years of his four with zero increase. That’s the first time that’s ever happened.

The sudden drop in the unemployment rate from 8.1 percent (it’s been over 8 percent for more than 40 months) to 7.8 percent on Oct. 5? Ha! If you believe that, I’ll sell you a bridge, cheap.  Ditto the sudden dramatic rise in housing starts announced the other day. So, so convenient, that the unemployment rate drops, and housing starts soar, one month before Barack Obama hopes to win re-election. And a sudden precipitous drop in the number of people filing new claims for unemployment reported a week ago? Oops! A “large state” failed to report its claims to the federal government in time for them to be included. Can you say, either California or New York — both with Democratic governors? In short, folks, I believe firmly that the Obama administration has found ways to “get to” the people who compile and release all those statistics, and now has its thumb firmly on its side of the scales.

So tonight’s debate will be probably the most important one we’ve ever had in this country. Mitt Romney’s not perfect — but he has the skills, and the will and dynamism, to tackle all these unresolved problems which are staring us in the face, as we near the cliff of national disaster. Barack Obama does not. He is a faux “rock star,” crossed on a mountebank, with a narcissist and a compulsive golfer who is not overly “work brittle” thrown in.

President Obama loves vacations and self-gratification. I for one hope he gets to enjoy plenty of both, on his OWN dime, after Jan. 20, 2013.