Democratic party prankster Dick Tuck once ran for political office, and was soundly defeated. Asked by the press for a concession statement, Tuck said, “The people have spoken — the bastards!”

The American people spoke yesterday, giving another four-year term to Barack Obama as president of the United States. He was not qualified for president when they elected him four years ago. He did not deserve a second term. But he managed to sneak back in, fooling enough of the people enough of the time to get a slim majority to vote for him. I wouldn’t use Tuck’s word to describe those who did; I think “fools” would be more appropriate. 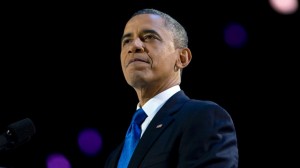 Of course, Obama and the Democrats didn’t pull the sneaky-peeky all by themselves. The mainstream media did all they could to help him back in. They have been in love with Obama since he gave a wowser of a nomination speech at their party convention in 2004. Their legs have been tingling ever since whenever they even hear the mention of his hallowed name. I might add that Barack Obama appears to totally agree with their regard for his mightiness. Look at the photo of him which accompanies this article. He looks to me like a haughty, prideful race horse which has just won the Kentucky Derby and is thoroughly enjoying having the press snap numerous photos of him. Notice, too, how the media like to photograph Obama from a slightly lower level, to try to make him look 10 feet tall. Oh, I forgot; they think he actually IS 10 feet tall.

The media — excepting Fox News — gave short shrift to the shameful Benghazi incident in which a U.S. ambassador and three other Americans were murdered by Muslim terrorists while Obama and his White House did nothing to stop them. Forget Obama’s lines about “we’re still investigating” and “the people responsible will be made to pay.” That was pre-election B.S., designed to placate the media, of which most elements were more than happy to be placated and to turn away.

Don’t look for much else to happen with that now that Obama is safely re-elected. That is, unless the Republicans who still control the House of Representatives show more courage than I expect they will, and actually continue to push hard for subpoenaes of administration officials and a full-scale investigation. It could actually lead to articles of impeachment being filed against the Mulatto Messiah. But I doubt that will happen, as the fiscal cliff looms before us, and the two parties must now, at five minutes to midnight, actually get serious about dealing with our $16 trillion, some-odd billion national debt, and with income tax rates which are scheduled by law to go back up to Clinton-era levels Jan. 1, if no action is taken by Congress and the president. Deal with looming national bankruptcy first, boys. But don’t forget executive malfeasance, either.

Of course, the mainstream media aren’t likely to pursue Benghazigate with anything like the fervor that they pursued Watergate during the Nixon administration in the 1970s. They’ve let Obama get away, for four years, with concealing his college transcripts, plus certain other information about his murky early life. But they were all in a sweat because Mitt Romney, the ill-fated Republican candidate whom Obama defeated, wouldn’t release 10 full years of his tax returns so they could pick over them and try to find “gotcha” elements with which to smear him.

Romney deserved better than that. Politics aside, he is an eminently decent man who has been highly successful on his own in life, despite coming from a moderately wealthy family.  He appears to be an excellent husband, father and grandfather, as well as a pillar of his Mormon faith. He also didn’t deserve the major league smear job that Obama’s campaign did on him via negative TV ads, especially in Ohio, over the past several months. But the trashing they gave him probably turned just enough votes Obama’s way to enable him to grab the (tarnished) brass ring one more time. After all, many people just believe the stuff they hear in negative political ads, without bothering to check the facts for themselves.

Of course, the Republicans hurt their own cause in a number of ways, too. Hard-fought primaries always leave the ultimate winner vulnerable to attacks from the opposing party in the general election, and the GOP primaries were often no-holds-barred. The GOP had to defend only 10 Senate seats this year, as opposed to 23 that the Democrats had up for grabs, and yet the Republicans managed to come up about two seats shy of what they held before the election.

Two losses, in Missouri and Indiana, can be attributed to Republican candidates being tripped up — again — by debate questions about rape and abortion.  Hello! When those interviewers or debate moderators start asking questions about contraception, or abortion, or rape, or all three, don’t you GOP campaign honchos realize that they’re just trying to trick your candidates into making statements that can be spun by the Democrats as “anti-woman”? How many times does it have to happen before you catch on to that ploy? The GOP needs to work out a standard answer to such questions, print out a number of copies, and give one to each Republican congressional and Senate candidate next election. And try to make sure they stick to what the prepared answer says.

So the American people have spoken, during a period of persistently high unemployment, turmoil in the Middle East that is worse than it was four years ago, doubts about America’s standing as the world’s super power, and a dozen other things, by re-electing the president, and keeping the Senate and House in the hands of the same parties which have held them during a good part of the development of  this mess. Doesn’t make a lot of sense, but then, does politics ever?

Barack Obama is riding high now, in the eyes of his followers and the mainstream media. But “His Uppityness,” as I like to think of him, may find the path becoming rocky again soon. There are a whole host of unresolved problems which have been kicked down the road for years. He, and the Congress, are going to have to confront them, and very soon, or we are headed for a REAL crash, probably similar to those that Greece and other European countries are going through right now. We’re just a year or two behind them. Hold onto your hats. And also your wallets, as it now appears that Obamacare will go fully into effect.

So, celebrate your victory, Mr. President. But remember that the Bible says, “Pride cometh before a fall.” Don’t get that nose too high up in the air.

As to my own personal feelings, I’ve considered myself a Democrat my entire voting life. But from now on, you can call me “independent.” I’m disgusted and fed up with both parties. I’ve gone my own way all my life (look at the Robert Frost quote at the top of my home page). Now I’ll be doing that politically, as well.

← Third debate could decide America’s future
The Winghams: What a clan! →

9 comments for “America, you blew it, big-time!”