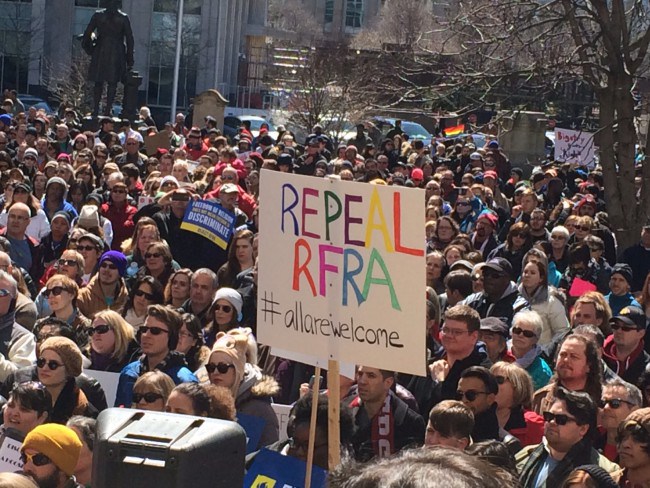 OK, all you Hoosier haters out there! No, I don’t mean US Hoosiers, who have been the target of unlimited, unfair and vicious attacks over the Religious Freedom Restoration Act which kicked up a major kerfuffle on the political Left. The port siders said the RFRA was “designed to give businesses an excuse not to cater to gay couples.”

But we Hoosiers are not “haters.” It’s that very same Left I’m talking to! Indiana hasn’t gotten so much bad publicity since Bobby Knight threw that famous chair across the basketball court! And undeserved bad publicity, too.

You liberals — excuse me, “progressives,” as that word “liberal” leaves a bad taste in many mouths nowadays — like to think of yourselves as oh, so “tolerant.” You practically break your right arms patting yourselves on the back for that (alleged) “virtue.” You try to brand anyone who disagrees with you as “intolerant.” That is, “We are tolerant — of anyone who agrees with us.”

You tried to convince the American people that you were opposed to an “intolerant” law which never in any way mentioned homosexuality or gay marriage. You presumed to be able to read the minds of all those Indiana legislators who passed the bill, and of Gov. Mike Pence who signed it into state law. And then when the family who owned the small Memories Pizza in a tiny north Indiana town called Walkerton told a TV news crew, when asked, that they would not cater a gay wedding because the concept of groom and groom or bride and bride conflicted with their religious beliefs, you pounced like a fox on a chicken.

Real brave of you, you stalwart heroes on the Left. Some of you threatened harm, even death, to the O’Connor family which owns that pizzeria. You tied up their business phone for days with screamed threats and condemnations. You mounted threatening “demonstrations.” You intimidated the O’Connors, finally, into closing down their business. You probably risked that broken arm again over your “victory” — or what you thought was one.

Gov. Pence at first tried to defend the law he had just signed when all this hooha blew up; then he stumbled, began proclaiming his lack of any anti-homosexual bias, and talked the legislature into re-writing the bill, presumably to make it more “gay friendly,” then passing it again, so he could sign it again, and thus feel all warm and fuzzy and proud of himself.

By doing so he torpedoed his own chances of running for the Republican nomination for president next year (that’s assuming he HAD any chances), and made himself and the Indiana General Assembly look spineless and weak. The Left applied screaming accusations, threats, marches, and the other means of intimidation they’re so good at, and the Right caved in, as it usually does.

Angry defiance on the part of governor and legislators would have played much better with Hoosiers, and with many others, too. There are reasons that New Jersey Gov. Chris Christie’s chip-on-the-shoulder, “Sit down and shut up!” attitude is popular with many people.

Many of the American people showed they had a lot more backbone than our esteemed elected officials, though. Someone started a campaign on Facebook to collect money for the O’Connors and their nine children in their time of need. Within a week or so — maybe 10 days, max — a total of $842,000 had been donated to the family. This week Kevin O’Connor, the patriarch of the clan, announced that he was re-opening the pizzeria. And Thursday, he did. A live shot on Fox News showed the little dining place, crowded with customers, with O’Connor and one of his daughters talking to Sean Hannity about how grateful they are for the generosity of their fellow Americans — and their courage in defending the O’Connors from the bullies on the Left.

And so all the screaming and the vile attacks on Indiana seem to have simmered down — for now. All about a new state law that said absolutely nothing — nada — about homosexuality or gay marriage. My mom used to call that “Hollering before you’re hurt.” My high school band director, Harold Rothert, had a similar saying: “A guilty conscience needs no accuser.” These Leftists leaped to some conclusions that would have put Superman and his tall buildings in the shade.

Could that have been because they suspect, deep down, that they don’t really deserve the “top ‘o the world” position they seem to be in, right now? Don’t forget that a large number of America’s states held referenda during the past decade, asking the voters if marriage should be defined as being a union of “one man and one woman.” All passed, most with sizeable majorities.

Then along came the country’s federal judges, all ready with pens in hand for the flood of lawsuits filed by gay rights activists trying to overturn said referenda. To a man — or woman — the un-elected judges found the results of the referenda “unconstitutional” because they — somehow — violated the Constitution’s guarantee of “equal rights.” I would have liked to have been a fly on the wall if the notion of “gay marriage” had been presented to the Founding Fathers when they were writing that constitution. The mind boggles at what the reaction would have been …

So the will of the American people, as expressed at the ballot box, was pitched into the trash in the 21st Century by these judges as if it were so much 18th Century hokum, which must be wiped from our history ASAP — never mind what the American people wanted.

Now, I know some gay people, I’ve never had any trouble with any of them, and I wish them well. But if “gay marriage” was such a great idea, how come we managed to get through about 10,000 years of recorded history without it? Why is it that, just 10 years ago, most people would have scoffed and laughed at the very idea — while now, it’s “the law of the land”? Because of the “keeping up with the Joneses” opinions of a handful of judges with lifetime security who never have to face the voters? HA!!!

Yes, you people have enjoyed beating up on us Hoosiers for the last week or so, with accusations of “hate” (the word you fling at everyone who disagrees with you about anything), suggestions that we are a state full of ignorant yahoos, that the phrase “Hoosier Hospitality” is a piece of laughable hypocrisy, and so on. Well, you’re wrong. As you so often are.

Indiana has been a center of true American culture for many, many years. Actors James Dean and Clifton Webb were both Hoosiers. Also both gay, according to their biographers. Cole Porter, one of the 20th Century’s greatest composers, was a Hoosier, and also a gay one. Theodore Dreiser, one of the most eminent novelists of the late 19th and early 20th centuries; and his brother, Paul Dresser, a songwriter, were from Terre Haute. Speaking of well-remembered songwriters, ever hear of Hoagy Carmichael? A Bloomington native whose masterpiece, “Stardust,” is considered one of the greatest songs of the 20th Century. Then there was the famous movie method actor, Steve McQueen, from the Indianapolis area.

Speaking of actors, an African American named James Basket, an Indianapolis native, played the seminal character of Uncle Remus in the Walt Disney movie, “Song of the South.” He received a special Academy Award for his masterful portrayal.

The immortal comedian Richard “Red” Skelton, and the famous “B” Western star Buck Jones, hailed from Vincennes. Two of Jones’ counterparts in the Western movies of the 1920s, ’30s and ’40s, Ken Maynard and his brother Kermit, were born and spent their early years in Vevay, a small town just up the Ohio River from Madison. Talented Western “sidekick” Max “Alibi” Terhune was born in Franklin. Beautiful and talented actress Carole Lombard was a native of Fort Wayne. And of course rock star John Cougar Mellenkamp got his start in Seymour.

And James Whitcomb Riley was one of the most popular American poets of the late 19th and early 20th centuries. He was from Greenfield. See my essay, “Have we forgotten the ‘Hoosier Poet’?” on the home page.

So you see, you Hoosier haters, you were badly misinformed in all your ranting about Indiana. I don’t expect you to apologize; you lefties never do. But now you’ve heard it from a Hoosier who isn’t afraid to call you out.

4 comments for “Hey, you haters! Lay off us Hoosiers!”