Michelle Obama, the nation’s First Lady, who by that fact should be the most respected woman in America, has given us yet another reason why she is viewed by many of us as just another angry, resentful, loud-mouthed black woman. 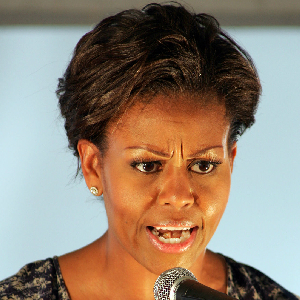 Mrs. Obama addressed the graduating class of Tuskegee University, a historic black institution, the other day. Did she give credit to the high position she holds by telling the grads that they were now going out into the world, that they could make a difference, that by being successful in their careers they could assure that their children would have more financially secure lives growing up than they did?

No, she did not. Instead, she indulged herself in one of those “We been discriminated against, made to sit in the back of the bus, followed around in stores, seen White folks cross the street when they see us coming …” Yadda, yadda, yadda, rants we’ve heard so many times. In other words, yet more of the racial boo-hooing that prominent black Americans of a certain mindset are so good at spouting — especially before adoring, cheering crowds of people who look like them, and think the speaker hung the moon.

No one with any sense denies that black people were slaves in America — well, most of them were. Nobody nowadays denies that slavery was wrong. No one disputes the fact that the former Confederate states in the South passed clearly discriminatory laws after the Civil War, that were intended to keep blacks “in their place.” That’s all part of American history. And today’s public schools spare no effort in pounding THOSE aspects of our history into the minds of our children.

But, hey, Mrs. Obama, here’s some more American history for you: More than 600,000 Union Army men, the overwhelming majority White, died in the Civil War so your ancestors could be freed from the South’s “peculiar institution.” The Supreme Court in 1954 overturned the “separate but equal” school systems in the South. Affirmative action was established to give modern-day African Americans (none of whom had been slaves themselves, by the way) a “leg up” on college, jobs, etc., by lowering the standards they were required to meet, setting “floors” under the number of black students admitted to colleges each year, etc. And in the late ’60s and early ’70s, the federal judicial system instituted “busing for purposes of racial integration” in public schools — a massive failure, as it turned out, but nevertheless well intended.

Of course, these “affirmative action” presidential and court decisions sometimes didn’t exactly do what they were intended to. In the California university system, the state legislature set a floor under the number of blacks who HAD to be admitted each year; and put a ceiling on the number of Asian Americans who were ALLOWED to be admitted. In other words, in order to help one minority group, they discriminated against another one.

So you see, Mrs. Obama, we European Americans have been aware of all our transgressions against you poor, put-upon black people, for more than 150 years. We’ve tried to make amends; we’ve used presidential orders and court rulings to give you people the “compensation for the legacy of slavery” that those in the corridors of power decided you had coming.

And we’ve often done this in defiance of what the White majority in this country would have approved, in a referendum, at that time or perhaps even now. What if affirmative action, and busing, and racial hiring quotes, had all depended on the results of a national referendum? Our (White) leaders sided with you, and against the majority of their fellow White Americans, because they agreed with you, that you had been victims all these years, and that amends must be made.

And the more that America’s leaders have tried to do for you, to make up for slavery and its aftermath, the more you people have complained, and ranted, and rioted. Your numbers in the universities have soared — but that wasn’t enough. You have taken over professional sports, with its huge paychecks and enormous prestige for its stars, all across the U.S. But THAT wasn’t enough. You have a much higher percentage of jobs in most fields than you did back in the 1950s. You have 40-plus guaranteed seats in the U.S. House of Representatives in districts that have been literally gerrymandered to assure that no White candidate can ever win them. Your singers, dancers, actors, are made much of by the Hollywood establishment, and given prominent roles in all awards programs — mainly because they are black, and the establishment feels SOOO guilty about slavery and Jim Crow! 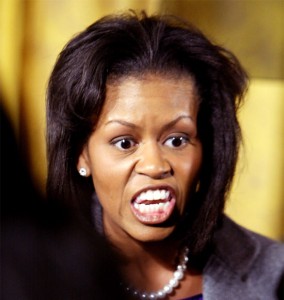 In the last six or seven years, look at how many TV commercials now feature a tall, muscular black man with a braying voice like a bull moose in mating time. And you can see by the way the commercials are directed that the message all too many of those show business liberals are wanting us to believe is: “Your day is over, White people. We, the bruthus, are in charge of the U.S. now. And there’s not a damn thing you can do about it! And we just LOVE it! We’re going to rub your noses in it just as often and as hard as we can!”

And yet, Michelle Obama gets up before an auditorium of graduating young African Americans, and encourages them to keep the “Oh, poor us! We be America’s victims!” notion squarely at the center of their consciousness. Not their potential to have successful, productive lives, because of actions by these same White leaders to try to make things more fair for them. Not the need to establish married families, as studies have shown these are more apt to be successful, to have higher incomes, to raise children who will achieve, and have successful lives of their own; than the disorganized, “Baby Momma-Baby Daddy” arrangements that so high a percentage of young black people have through their childhood nowadays.

The several incidents of young black men being killed by police (in connection with threatening/uncooperative behavior by the black men) which have been played up by the mainstream media in the last half year have given the blacks yet another excuse to say, perhaps echoing one of the slaves in Mark Twin’s “Huckleberry Finn,” “Po’ nigger cain’t git no show!”

But think about this: Does this mean that young White men (or young Asian American men, for that matter) are never, ever, shot dead by police in connection with confrontations on the streets? Of course not. It happens. It’s just that the mainstream media, with their leftist bias, are not interested in situations like that. They love the “poor black man killed by racist White cop” scenario so much, that they will keep any other shootings that don’t fit that description, under wraps.

So, Mrs. Obama, you can spew your anger and hatred of White people before approving, admiring audiences all you want to. The people of your race who agree with you, will applaud and cheer (along with White folks who are of the liberal persuasion.) But for the vast majority of us White Americans, your behavior is contemptible. In your position as First Lady — the first First Lady of African descent — you should know better.

And I think that, deep down, you do. But you don’t care. You cherish and hug your anger, your resentment, your “chip on the shoulder,” despite all the huge gains your people have made in the last 50 years. Or, to quote one of the favorite lines of today’s black rabble rousers, “We’ve come a long way — but we’ve got a long way to go.”

You’ve come a long way — mostly due to government programs, designed and passed by mostly-White legislators. Or, to be more accurate,  mostly designed and IMPOSED by executive order or judicial fiat. It was mostly we White folks who brought you a long way, Mrs. Obama. But according to your commencement speech the other day, we’ve done nothing but hold you back. I think you need to do more reading and studying of U.S. history since the 1960s, and less speechifying.

← Five great friends who have ‘Gone Home’
News flash: Nobody’s all bad — or all good →