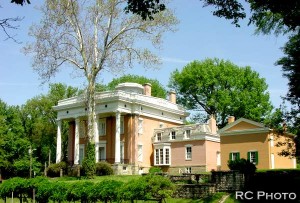 Whither goest thou, Madison, Indiana, my hometown?

You were the biggest city in Indiana in the 1850s; you were the pork-packing capital of the world.  The most-decorated American veteran of World War I was born near here, and lived here for a time. The first publisher of your daily newspaper helped found the Republican Party. John Wilkes Booth, the Southern actor who later assassinated President Abraham Lincoln, had a notable tussle with a scorned female here, on the day the Civil War began.

Closer to modern times, President Herbert Hoover made a visit to Madison one day in 1929 to open a brand-new bridge linking Madison with Milton, Kentucky, just across the Ohio River. One of the 20th Century’s greatest actresses, Irene Dunne, lived here during her junior high and high school years. Two noted Hollywood movies — “Some Came Running,” in 1958, and “Madison,” in 2000 — were filmed here along the banks of the Ohio.

Your high school basketball team, the Madison Cubs, won the state championship in 1950 after coming within an eyelash of doing it twice within the previous eight years. And this was in the days when the state championship really MEANT something, because there was only one each year. Your downtown, all 133 blocks of it, is listed on the National Registry of Historic Places. No other city in the U.S. can say that.

And yet, and yet … in recent years, we seem to have somehow lost our way. Despite efforts to construct a connector route to an interstate highway, none has been built. Our downtown has seen better days, business-wise, with virtually all of the old family-owned businesses that those of us who are — uh, a little longer in the tooth, remember from our childhood, long gone, when we thought they would always be here. Metzger’s, John Knoebel’s and Knoebel-Bird men’s clothing stores. Schultz Brothers, Stanton’s and Hertz shoe stores. The Madison Theater, which was on the southeast corner of the Main Street parking lot, across the street from the present comfort station. Mundt’s, Samples, and McCauley’s ice cream parlors (the two “M’s” also sold many kinds of candy). The Lodge Brothers Furniture store (owned by Boone and Gavin), and the Lodge Brothers Hardware Store (owned by Jack, Irvin, Chester and Bill). All the Lodges were brothers. Rogers Drug Store. Inglis Drug Store. Wetzel’s Drug Store. All those names are gone now; Wetzel’s is the Madison Apothecary. It, and the Hertz store, are the only locations still in the same business, all these years later.

I should add that there are a number of other businesses, established in more recent times downtown, which are thriving today due to good management and other factors.

On the negative side of the ledger again, we’ve moved too many of our important functions to the hilltop, too. That’s the new part of Madison, on the top of the bluff, as opposed to down in the valley, for those of you who aren’t familiar with our town. It started with Madison High School — now Madison Consolidated — back in 1960. The junior high followed; then the county license branch; and the Social Security office. Two years ago, King’s Daughters’ Hospital, now known as King’s Daughters’ Health, was moved from the area where it had stood for 114 years, on Presbyterian Avenue near Broadway downtown, to a new building on S.R. 62, just east of one of the shopping areas now located on the hilltop. The hospital’s departure, especially, dealt a heavy blow to a number of the remaining downtown businesses.

And we Madisonians haven’t helped keep our city vital — that is, in a number of ways we haven’t. Visitors often comment about how we’re friendly to strangers on the street, and willingly give them directions to restaurants, motels, and the like. And 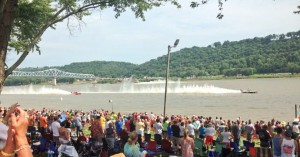 Racin’ on the river — the Madison Regatta

we are. That’s part of being a river town; Madisonians have always been used to strangers arriving and leaving. Want a comparison with a southern Indiana town that’s NOT on a river? Ask anyone who has visited Seymour several times how friendly the people are THERE.

But when we talk among ourselves about our hometown, all too often our sentiments are bitter and cynical. “This USED to be a busy town.” “There used to be 15 gas stations downtown here; 20 or so groceries; clothing stores; shoe stores. Now you can’t even get a key made downtown!” It’s like our general theme is, “This town’s dead, boys. It’s over, boys. We might as well all go jump off the Madison-Milton Bridge, boys.” “These local politicians are all stupid, or crooks, or both.” That latter sentiment is expressed constantly, daily, on the Old Madison website here in town. “We don’t need no tourism here; we need some factories!”

In other words, an outside observer might conclude that we Madisonians, with all our proud history, have simply given up. Our best days are behind us; our proud old town is down and out; and there’s nothing we can do about it.

And yet, and yet … This past Friday I sat at our Fountain Park, beside Trinity United Methodist Church (the only church in our county that looks like a cathedral), with several hundred other Madisonians, and heard a group called The Rumors, from Louisville, sing and play a wonderful collection of rock and pop hits from the 1950s, ’60s and ’70s. Numerous people got up and danced in front of the band in time to the songs — especially one lady who I’ll never forget. It was a great city get-together, the kind that makes you think, “Well, maybe Madison hasn’t hit such hard times, after all!” It was one of those moments that makes one forget, at least for a while, that our business climate is not what it once was. Our city still draws admiring visitors, talented musicians, and the like.

And each year, over the Fourth of July weekend, we host the Madison Regatta. I know, I know; many Madisonians profess contempt for the race, swear they wouldn’t attend it on a bet, complain that it draws too many drunken troublemakers into town, ad infinitum. But when it comes time for the annual promenade along Vaughn Drive, the exciting zooming of the unlimited hydroplanes down, and up, the Ohio River, the fascinating air show performed in a World War I-type byplane, and a number of other fun events; when all those things are going on, I always notice a lot of faces that I recognize. Fellow Madisonians. “Don’t tell them you saw me at the boat races; it ain’t cool in Madison to like the regatta!”

Ditto on the regatta parade, which always draws big crowds. And the other events that mark Regatta Week.

And we have other annual events, usually on weekends, too, that break the monotony some feel in a small town. The chief among these is the Madison Chautauqua of Art, held the last full weekend in September. Some think it draws more people into town than even the regatta.

Which brings me to another point — or rather, a suggestion — that I’d like to bring up. Folks, fellow Madisonians, we can talk all we want to about “getting new factories” into Madison, but on any kind of a major scale, I’d say it ain’t gonna happen. We’re a part of the Rust Belt now. We’ve lost a bunch of factories over the last 20 years. We don’t have an interstate connection, or active railroad traffic, as, for instance, Seymour does.

But I’ll tell you what we do have, as if all of you didn’t know it already. We have a beautiful historic setting. We’re located on a bend of the great Ohio River that offers unmatched views of the river, the original portion of the city in the valley, the hills beyond on both the Kentucky and Indiana sides. We have huge numbers of 19th Century buildings, many of them strikingly well preserved, which draw thousands of tourists to Madison each year. One of the most famous, pictured on this page, is the Lanier Mansion, dating back to 1844 and built by James F.D. Lanier, a wealthy Madisonian who loaned money to the state of Indiana during the Civil War to ensure that its efforts on behalf of the Union could continue.

In short, we have all the makings of a major tourist attraction here. Sure, it would take some commitment on behalf of the city and organizations here. It would take a change of attitude on the part of many Madisonians. To become like, say, Gatlinburg, or Little Nashville, is not a task easily accomplished. But with the determination the leaders and citizens of those towns displayed years ago, we could do it.

We’ve gotten a good start. But it doesn’t help when we complain about the various weekend festivals, or the regatta, or the Chautauqua, as if they were unwelcome intruders tramping over our front lawn or stealing “our” parking places. You want a parking space whenever you need one? Go to a town that’s dead, and you’ll find plenty of them. Hustle and bustle, a plentitude of parked vehicles with out-of-town plates, difficulty finding a table in a restaurant — those are signs of prosperity, of people coming to buy what you’ve got to offer. Of a town with a future.

Factories — and interstate connectors — can be built anywhere, folks. Beautiful river views, 19th Century buildings, a setting where the bluffs loom picturesquely over the valley below — they can’t be.

We’re fortunate here, fellow Madisonians, in ways many of us seldom really think about. Sure, downtown business is not what it once was. But if it has in reality turned into a lemon — then, let’s start figuring out how to make lemonade. We’ve got many things going in our favor, folks. Let’s do less complaining about all the things that are “wrong,” and try to make them more “right.”

Opportunity is knocking at our front door, Madison. Are we going to yell, “Go away! We don’t want any! This town is dead!” Or are we going to welcome it in? Our municipal future depends on it.

And I’ll finish this column on a personal note. Twice, over the 40 years I was a reporter for The Madison Courier, friends who were from other locations, urged me to “Get out of Madison! There’s nothing for you here! You’re just spinning your wheels here!” I’m happy that I didn’t take their advice. This is my hometown — my Madison. It’s not perfect, but then what place is? I’m glad I stayed.

← News flash: Nobody’s all bad — or all good
Confederate flag and our guns: HANDS OFF! →

2 comments for “Madison, Indiana CAN come back!”