“I’ll never see one built in my lifetime.”

That was a typical Madisonian — could have even been me — talking about the new bridge that hasn’t been built and to hear us tell it never will be built spanning the Ohio River between Indiana and Kentucky, or more specifically Madison and Milton. 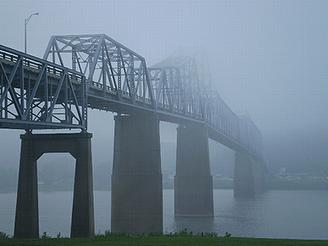 And of course, to hear us tell it, it’s all “their fault.” You know “they” — the famous, faceless, all-powerful people who frustrate our every attempt to get connected to an interstate, attract new plants, or get a bridge built. “The big boys,” as a friend of mine often says, don’t want us to have it; or, if they “let” us have it, it will be only at the price of huge financial benefits of some type or other for “them.”

Of course, the small, insignificant fact that we can’t agree among ourselves where such a bridge should be built has nothing to do with the interminable delay, now does it? Should it go east of town? No! Might benefit some wealthy landowner! Come across to line up with Jefferson Street, so traffic could go straight across the bridge and up the U.S. 421 hill? No! Would take all the traffic away from downtown, and we’d have to tear down three “historic” houses! Farther west of town? No! Too isolated!

Maybe we could have a referendum, with a multiple-choice question about where the bridge should go. No, on second thought, the powers-that-be around here managed to manipulate the last one of those, depriving us of a gambling boat that could have benefited the city and county.

Of course, folks, I’m saying a lot of this tongue-in-cheek, to try to show how silly this debate can be. While we’re arguing, cussing and discussing over our morning coffee cups, the existing Madison-Milton bridge is getting older and older. Remember the news story from about 41 years ago, about the bridge between eastern Ohio and West Virginia, that was built the same year as our bridge, and which collapsed suddenly, with considerable loss of life? Remember the Minneapolis bridge collapse of just a few months ago? That bridge was much newer than ours.

“They” have assured us that this bridge of ours is safe — even after the earthquake of a week or so ago. But anyone who reads the Old Madison website knows that most of us don’t put much faith in what “they” tell us. So why are we not more worried about this bridge?

A friend of mine always makes sure his seatbelt is unfastened when he starts to drive over it. Why? “If this blankety-blank thing collapses, I want to have a fighting chance to get out of this car!” he explains. Tales abound locally about tremors that can be felt at times as you cross the bridge, about semis knocking each others side mirrors off as they pass each other because the squeeze is so tight.

What can we do to hasten the construction of a bridge? Well, decide where it should be, for starters. Aren’t there enough smart people in this community to figure that out, then manage to convince the rest that it’s the best choice? Then, once having done that, we could start bombarding our elected officials with e-mails, letters, phone calls — the works. Tell them that getting this new bridge is not just a matter of dollars and cents, and priorities — it could well be a matter of lives saved or lost.

Because the squeaky wheel does indeed get the grease. “They” are NOT going to say, at some later date, “Well, these folks in Madison were nice and polite and waited their turn and didn’t bother us any, so why don’t we just build their bridge first?”

Imagination and prayer are not going to hold our Madison-Milton bridge up forever. And if, God forbid, it ever falls, it’s likely that it will be when there is the maximum weight on it: Possibly several semis, a bunch of people in their private vehicles going home from work — a scary scenario like that.

And while we rant and rave about the sheriff’s TV set, and the Meese building, and why haven’t they solved all these break-ins, if any of us are driving across that bridge if and when it falls, all those concerns will vanish quicker than — well, quicker than an occupied motor vehicle going SPLASH!