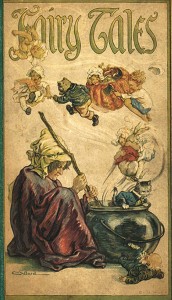 Did you ever suddenly, unexpectedly, run into some good friends that you hadn’t seen since grade school? And find out that all the things you liked about them, things they had said and done when you were all young, came flooding back to you — and you enjoyed them just as much as you did then, many years ago?

Well, I did the other day.

No, they weren’t “human” friends — although I have encountered a few grade school classmates, many years since, and enjoyed those meetings.

But these were 19th Century “fantasy stories”, collected in a book called “Victorian Fairy Tales,” edited by Michael Newton. The minute I saw it on the rack at the Jefferson County Public Library, I knew I wanted to read it. So I checked it out.

AND THE STORIES, by famous writers like the Brothers Grimm, Hans Christian Andersen, William Makepeace Thackeray, Andrew Lang, and others, were ones that I recall reading as a child.

A little background here. When I was born, my parents bought a set of the Encyclopedia Americana for me to peruse, once I had learned to read. The encyclopedia company threw in a set of story books, including fairy tales like many of these; adventure stories; tales from American history; and others.

Before I became literate, Mom and Dad would read the various stories to me, in the evening when they finally had all the chores at the motel done for the day. Then after I had mastered the written English language, I took off, reading for pleasure on my own at every opportunity, and never looked back. Soon I had started writing — well, I guess you could say “essays,” mainly for my own amusement; and the rest is history. MY history.

Anyway, I remembered such fairy tales as “Rumpelstiltskin” (Jakob and Wilhelm Grimm); “The Princess and the Peas” (Hans Christian Andersen); “The King of the Golden River” (John Ruskin); and “The Rose and the Ring” (William Makepeace Thackeray).

It’s interesting how, in these 18th and 19th Century tales, royalty is almost always involved in one way or another. Rumpelstiltskin is a droll little man who strikes a bargain — unwisely, as it turns out — with a young lass who is being abused by a greedy king. Gluck is the gentle, kind younger brother of the evil Hans and Schwartz, the Black Brothers, who receives a strange and mysterious visitor one day: The King of the Golden River. “The Rose and the Ring” is a complex story of a king and queen, their daughter, Princess Angelica, who is not nearly so beautiful or talented as she is convinced she is, two princes who are in conflict with one another, and a little orphan waif who is taken in by the royal family, only to prove years later to be — a princess herself!

YES, THESE 19TH Century authors were obviously fascinated by royalty, by its wealth, and glamour, and its ability to make things happen, just by giving orders. In those days, you see, the vast majority of European countries were ruled by kings and queens. They were, in a sense, “rock stars” of that era.

But its monarchical characters definitely were not always portrayed as magnificent and heroic. There were kings of only modest intelligence; queens who were snarly disbelievers; princesses who were enormously pleased with themselves (such as the one I mentioned in the second previous paragraph above), or who weren’t at all interested in even BEING royalty.

And of course the princes were a mixed bag. Some were weak and passive, like Prince Giglio in “The Rose and the Ring,” who was euchred out of the crown in the kingdom of Paflagonia by his uncle, who proclaimed himself King Valoroso XXIV. And there was Prince Bulbo, from the same story, who impressed everyone as handsome and dashing — until he dropped a magic rose which he had to keep about his person at all times to ensure such admiration from the hoi polloi. As soon as the rose fell, they immediately started to notice some flaws about him that they hadn’t been aware of before.

And then we have Prince Prigio, from Andrew Lang’s story of the same name. He was cursed, so to speak, at his christening, by an evil fairy who had not been invited to the royal event. “My child, you shall be TOO clever,” the old crone hissed into his ear — and he grew up to be so. As a child, then a young man, he became what we Americans call a “know-it-all,” correcting people constantly, getting the best of them intellectually, and enjoying himself immensely. And for that reason, many people cursed him (behind his back, of course; he WAS royalty). And 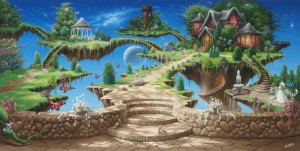 BUT AFTER MANY harrowing adventures, Prigio found the love of his life, married her, and used a magic wishing cap to arrange that, from then on, he would SEEM to be no more clever than other people. Pretty smart, huh?

Mountains play a big part in many of these tales — high, beautiful mountains on which people who are magically flying, land; or where a worthy young man throws holy water into a mountain stream, turning it to pure gold. This, after his two elder (and evil) brothers have both failed in their attempts to do the same deed, having acquired the holy water illegally. As a penalty, they were both turned into black stones by the King of the Golden River.

Speaking of flying, it’s a big feature in many 19th Century fairy tales. A young, bored queen named Eldrida gets a tip from her only friend — a bat who lives in her garden — on how she can gain the ability to fly by eating a certain plant. She munches the vegetable, takes wing, and, in the end, winds up marrying a stalwart mountain farmer she meets by landing on his property. He was born blind, you see, and lives with his mother on their farm in a high valley. And the same bat who told the queen how she could fly, also told her how to cure blindness! Which she did. With a concoction she made from a certain type of flower, which she persuaded her loved one to drink.

She had no interest in being a queen, anyway.

Prince Prigio flies on a magic carpet during his adventures. It had been one of the gifts the fairies brought him at his christening, which his mother the queen threw into a broom closet because she was a “realist” who didn’t believe in such “absurd things” as fairies.

WONDER IF ANY of these 19th Century authors ever imagined that, not many years after their passing, people would actually BE flying — not on magic carpets, but in man-made, gasoline-powered machines?

There are humorous elements in the fairy tales, too, of course. In “The Rose and the Ring,” two prominent characters are named Countess Gruffanuff (a portrait shows her, stiff and haughty — and gruff); and Count Kutasoff Hedzoff. I believe he was the royal executioner. There is also a humorous description in the same fairy tale of how the king, Valoroso XXIV, has to toss down several shots of liquor before he can stand up to his wife, the queen.

Needless to say, royal personages were not the only ones featured in these Victorian Era fairy tales. Little Gluck and his evil brothers are a good example. Then there were Hansel and Gretel, who as I recall were children of a woodcarver and his unpleasant second wife. There are peasant housewives, village cobblers, cooks in palace kitchens, simple farmers, and the like. The magic, the fairies, the “cap of darkness” which made Prigio invisible when he wore it, the gnomish dwarfs with inexplicable powers — they came to peasant and prince alike. The emphasis of each tale, depended on the mood of the 19th Century author when he or she sat down with pen in hand to provide another entertaining, bewitching tale for the children to read and enjoy. And the parents, too, although some of them would not have admitted enjoying such fantasies.

But many adults DO enjoy reading them — including me. And just why is that?

Well, look at all the other things we have to deal with nowadays. A government that doesn’t work. “Popular” music that, for many of us, would “gag a maggot.” A constant stream of bad news from the media. Constant “spam” e-mails that assure us that the U.S. is “going down,” that our IRAs and 401(k)s are all about to become worthless, that we can’t count on the government (that doesn’t work) to do anything about it, that our only chance is to get in touch with some big internet company that will give us all the right answers (SURE it will!) Movies filled with vulgar, trashy language (but don’t say “nigger”!) Hundreds of thousands of people who don’t share our religion, our world view, our ANYTHING, pouring over our southern border, or flying into our country. Our children starting out their careers with staggering student loan debts staring them in the face, as far as the eye can see. And our children still living at home from their late 20s into their early 30s, having decided to postpone “growing up” as long as possible.

YES, ALL THAT is bad — very, very bad. We need a good escape from it.

So, we pick up a book of the Grimms, or Hans Christian Andersen, or William Makepeace Thackeray. And we begin reading about “Hansel and Gretel.” Or “Rumpelstiltskin.” Or “The King of the Golden River.”

Lose yourself in them. You can do that; they were written to be that way. Oh, you can’t flee permanently from all the real problems of our real world; even magic can’t work THAT kind of a wonder. But you can take a vacation from our currently-painful reality.

Now everyone lean back, relax, and repeat, slowly and lovingly, after me: “Once upon a time …”

← There IS something we can do about it!
Griffith’s epic film still outrages liberals →

4 comments for “Fairy tales: They’re not just for children”