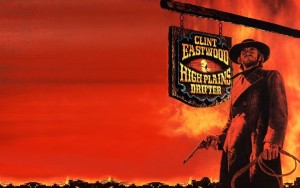 Are there really such things as “guardian angels” — people, or “beings,” who suddenly appear, mysteriously, at just the right place and time, to save human beings who have become too timid and cowardly to save themselves?

If you’ve ever watched the Clint Eastwood feature, “High Plains Drifter,” you may well believe that those guardian angels really do exist. Which doesn’t necessarily mean that they — or he/she — will always show up just when you’d love for them to, and solve your current, urgent problems for you.

Remember “High Plains Drifter”? It was the first Eastwood Western I ever saw. I missed “A Fistful of Dollars,” “For A Few Dollars More,” and “The Good, the Bad, and the Ugly,” when they were first released in the mid’60s. I have seen them since, as well as “Hang ‘Em High,” which was his first Hollywood-made movie, the first three being “Spaghetti Westerns,” filmed in Italy. Eastwood directed “Drifter,” too.

THIS IS NOT a review of “Drifter,” per se, but I’ll give you a brief synopsis of it. One day in the 1880s, a lone gunman rides toward a little Western town, his horse going at a leisurely trot, the gunman staring straight ahead, seemingly in no hurry but absolutely certain of where he’s going and what he’s going to do. People in the town stare at him as he rides in, as if they’re thinking, “Who is that? Seems like I’ve seen him before, somewhere; hmmm …”

The stranger heads for the town saloon, orders “a beer and a bottle, and a quiet hour to drink it,” but three plug-uglies in the saloon begin baiting him, “giving him a hard time,” and he takes the whiskey bottle and heads for the barber shop nearby for a haircut and a hot bath. The three follow him over there, begin berating and threatening him again — and wind up dead, all three of them, from three perfect shots from his revolver.

Later, when the stranger is catching some much-needed sleep in a hotel, he dreams — or maybe it’s a flashback — to a time a year or so before, when a young U.S. marshal was bullwhipped to death on the main street of the town one evening. Three outlaws did the heinous act, while the townspeople stood back in the shadows, watching — and doing nothing to assist the young lawman who was begging for help. Too timid; too cowardly. Better not get involved. The camera shows close-ups of him for us as he is whipped bloody and finally, dead. Who is that? Seems like we’ve seen him before, somewhere; hmmm …

The stranger gets a little lovin’ along the way, too. The first day he’s there, a young woman who saw him ride in and “wants to get acquainted,” passes him walking on the street, deliberately brushes against him, then angrily accuses him of being “clumsy.” Big mistake. She winds up being dragged to the nearest livery stable and raped. Well, maybe “raped” is too strong a word. Twenty-four hours later, she tries to shoot him dead while he is taking a warm bath — for a fee — at the town barber shop. Narrowly escaping the flying bullets, he says, as she storms out, “Wonder what took her so long to get mad?” Later, he beds a slightly older, much more respectable woman who has been gazing hotly at him ever since he rode in. She doesn’t get mad.

IT TURNS OUT that the three desperadoes who whipped the sheriff to death were later sent to prison on evidence provided by the townsfolk (who were too timid to try to overpower the three scumbags who were killing him). Ever since, they’ve been terrified that these big bad men will come back to put the hammer down on them when they are released from prison. So they hired three other gunmen to hang around town to protect them, if and when the first three should come back. The second three are the ones who “hung around here, drinking beer and acting snotty, for a year, then got theirselves killed one day before we needed them,” as the mayor says ruefully in a meeting with other town leaders.

So the town leaders approach the stranger — respectfully, I should add — to ask him to stay in the town to protect them, because the first three desperadoes are scheduled to be released from prison just any day now. He agrees — reluctantly, it would seem — after they promise him that he can have anything he wants from the town’s merchants, free of charge. He uses this perk to obtain new boots and other items for himself, of course. But he also shows that he’s not all “selfish tough guy” when he hands two big jars of candy to two little Indian children, and a tall stack of blankets to their grandfather, who have been belittled and insulted by one of the storekeepers. “No charge.”

Meanwhile, the three convicts are released from prison some miles away. They get their weapons back, but no ammunition. By dint of a few killings, they manage to obtain three horses, and head for Lago, with revenge on their minds.

The “Man With No Name” puts the townspeople to work, preparing for the arrival of those who want to obliterate them, assigning the various men, armed with rifles, to the roofs of store buildings, the steeple of the town’s church, and so forth. He also has the hardware store owner provide enough red paint (“No charge”) to turn the entire exterior of the town of Lago, into “A Study in Scarlet.” Or might we call it “Devil Red”? Maybe so. He sets the local midget who becomes his “Man Friday,” so to speak, to work painting a new name over the “Lago” on the town limits sign. “HELL.” And that’s what it will become for a lot of people when the three thugs arrive. And they’re getting close.

THEN, WHEN ONE of the town’s “leading citizens” asks The Man With No Name, “How you gonna handle them three?”, he answers, “I’m not. YOU are.” And he calmly rides off on his horse, down the main (and only) street, out of town. And doesn’t look back.

Panic sets in, big time, among the residents. But they remain at their posts, trying to stiffen those spines. Then the three bad guys ride in, galloping, guns blazing, firing everywhere they see a townsman with a gun.

The Lago residents freeze, terrified. Their few shots go wide of the mark. Two are shot dead off the roof of a building. The man in the belfry of the church falls down, bounces off the roof of the church, hits the ground, also killed. The men remaining on the roofs run for their lives, toward the rear of the buildings.

The three gunmen lay waste the town, including setting one of the store buildings on fire. As night falls, they have rounded up all the adults in town, forcing them into the saloon where they are holding them, at gunpoint, while the bad guys decide what to do next.

BUT OUT OF nowhere, the business end of a bullwhip snakes over the top of the swinging doors, snags one plug-ugly around the neck, and drags him outside. The two others, suddenly afraid to rush after him, hear repeated cracks of the whip and screams from their comrade.

Yes, The Man With No Name has returned. He is flaying the skin off the man who is now lying, writhing in agony, in the street. Just like the young sheriff was whipped to death by the three thugs. As the stranger applies the whip, flames from the burning building frame his silhouette. The fires of hell? Maybe. Could he be … an avenging angel? Who knows?

The sounds of bullwhip having ceased, one of the other two outlaws ventures outside the saloon to see what has happened. A noose drops down from the second-floor balcony, snaring his neck and then being jerked upward so that he is strangled, and dead, in short order.

When the third crook emerges cautiously from the saloon, he roams around briefly — and also cautiously — looking for the stranger. When the outlaw finally is confronted by him, he tries to outdraw The Man With No Name. But the stranger shoots his revolver out of his hand, then puts three more shots directly through the crook’s torso. Before the guy joins his two henchmen in the Hot Place, his last words are, “Who ARE you?”

NATURALLY, THERE IS no reply from the stranger.

The next day, the inhabitants of Lago/HELL are cleaning up the debris left by the shoot-outs and related destruction. The Man With No Name, having accomplished his mission (or WAS it?), rides out of town, again staring straight ahead. The lady with whom he had his second roll in the hay is standing by the street. As he reaches her, he reins in his horse. She smiles at him; a loving, wistful smile, as she knows she’ll never see him again. He returns the smile. Neither speaks; no need.

As he rides past the graveyard on his way, the town dwarf, his “Man Friday,” is finishing up an epitaph for a grave that never had a marker before. The stranger stops, exchanges nods with the little man. The dwarf says, “Say, I never did know your name.” The stranger smiles. “Yes, you do.” And tips his hat, and rides off down the trail. The camera moves around to show the epitaph. It’s for the young sheriff, who has been avenged.

The stranger rides away from the camera, at a leisurely trot, looking straight ahead. He approaches some mists on the horizon — enters them, and disappears. He had appeared out of those mists at the start of the movie.

WELL, MY “SYNOPSIS” ran longer than I had planned. Hope you enjoyed it, anyway. But here’s the point I was laboring toward: The people of Lago were afraid to save their sheriff, despite their heavily out-numbering the three desperadoes. They allowed themselves to be bullied, in turn, by The Man With No Name. But he was pushing them to do what they should have done in the first place, and what would be beneficial for them and their town, in the long run. He even gave them an opportunity to do it themselves, at the 11th hour — but they blew it, again. The stranger himself finally eliminated the thugs who had intimidated an entire town.

See anything that looks familiar? This country stood up for itself for many, many years. Didn’t allow foreign powers, or discontented, rebellious natives, to cause problems for us, without heavy retaliation. “Don’t Tread On Me,” as that famous Revolutionary War banner said.

But in recent years, we’ve become prosperous, flaccid, and scared. Scared of being called “racist.” Scared of dealing sternly with those who want to harm us, or intimidate us. Scared of calling a spade, a spade.

We’ve become like a giant Lago. Afraid of protecting ourselves, and our country. Afraid of “offending” people. Afraid of being attacked by terrorists — and also afraid to deny entry to our country to “refugees” with giant question marks above their heads.

DO WE NEED The Man With No Name? Someone to come in and take over, to mow down those who are threatening us, or making us look cowardly and foolish? To press us to do things we should have done on our own, long ago?

And if we do, who is that man? No, I don’t know, either. But as far as I’m concerned, the sooner he rides in for a glass of beer, a bottle and an hour of quiet to drink it, the better.

1 comment for “Does America need The Man With No Name?”