Hackin’ Hillary (cough, cough!) did a nose dive into her limousine during the 9/11 memorial services in New York City Sunday. “Over-heated,” her minions told the press. Yeah, those 75-degree, 39 percent humidity days are murder, aren’t they? Then, after being whisked away to Chelsea’s swanky Manhattan apartment (what, no ER visit? Oh, no! What, and have to risk rubbing elbows with the peasants?), and after a doctor was summoned into Hillary’s august presence, that M.D. announced to the press that, no, Mrs. Clinton was not “over-heated,” but had been diagnosed as suffering from pneumonia — two days before.

Pneumonia? Oh, well, that explains the coughing fits she’s been having since — when, 2011, or thereabouts? She’s had pneumonia all that time! Guess that’s why she passed out and fell, braining herself, in 2012. Pneumonia can do that, of course. Her husband Bill, one-time Philanderer-in-Chief, said himself that it took her six months to recover. Which, of course, doesn’t count the time in 2005 that she passed out at the podium and fell on the floor during a speech. Her aides teamed up to block the news cameras from getting footage of her being gurnied from the room. That pneumonia is a bitch, isn’t it?

OK — enough wisecracks. Let’s get serious now. Hillary Clinton has had a long series of such mysterious “ailments.” None was ever explained sufficiently. Especially from the time she became secretary of state. Why? We are entitled to suspect that Hillary, having hungered for the presidency ever since the Mulatto Messiah, our First Black President, defeated what everyone thought was a sure thing for her, in 2008, is desperate to keep all her skeletons locked firmly in the closet. That’s whether they’re of the missing e-mails sort, the Clinton Foundation get-rich-quick scheme, the numerous scandals, monetary and philandering, from hers and Bill’s years running Arkansas — or the continuing questions about her health.

Her periodic coughing fits — some of which have come during public speeches — are a good example. She has appeared to nearly vomit a couple of times. She always has a tall glass of water handy under the podium — and makes a great show of lifting the glass, taking one tiny sip from it (wouldn’t a few good gulps help a cough better? Or does she feel that the sip looks more “lady-like”?), then puts the glass out of sight again — and r 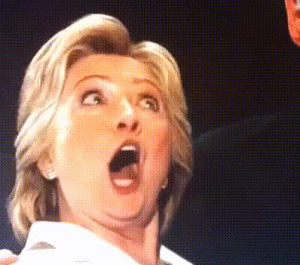 You can see one of her coughing fits at the top of this page — with a sympathetic friend looking on. “Better to see you with, my dear!”

Then there are the mini-seizures she has had periodically. You can see one of them in the photo at right, just after her acceptance speech at the Democrat Convention. She looks like she’s just starting a rousing chorus of, “OOOklahoma, where the wind comes whistling down the plain!!!” What’s going on with that, anyway? She’s tried to cover them up, pretend she was “just clowning,” or something. But they look suspiciously like seizures, lasting just a few seconds, to me. My mother was epileptic, so, believe me, I’ve seen petit mal — and grand mal — seizures many times. Are Hillary’s brief “fits” a warning that something else, something more serious, could be coming? Maybe during her first debate with Donald Trump?

Sure, we’ve elected presidents before who had physical conditions or illnesses that were unknown to the voters. Franklin D. Roosevelt was confined to a wheelchair due to polio — but the press never, ever, photographed him in it. All photos of him were taken when he was seated at his desk, or standing (with the aid of leg braces) at a podium. John F. Kennedy had some serious physical conditions which were, nevertheless, never revealed to the public during his lifetime.

But Hillary’s problems — whatever they are — are definitely more in the realm of things that might affect her judgment, her ability to make crucial decisions as president. The coughing; the seizures; falling and receiving a brain concussion as a result. Those aren’t things that we should take lightly in a presidential candidate, folks.

Now, you’ve probably guessed by now that I don’t like Hillary Clinton, and I don’t want her elected president. And you’re right. I don’t like her political views, her promises to continue the Obama policies of the last eight years, and a number of other things.

But it’s her physical stamina — or lack of same — that people should be looking at closely. Do we want the new president passing out during his/her inaugural address? Or making some disastrous major decision due to some brain problem that hasn’t been diagnosed — or is being hidden by her campaign? Or have another knee-buckle episode as she and Bill are coming down the White House stairs to the ballroom with some powerful foreign leader and his/her spouse in tow?

Donald Trump has really gotten his act together in the last few weeks, with serious policy speeches, a visit to flooded Louisiana, a trip to meet with the Mexican president over the illegal immigrant issue, and visits to and speeches in inner city black neighborhoods. Meanwhile, Hillary took two weeks off the campaign trail to do fundraisers among very wealthy supporters (and utter her shameful “basket of deplorables” insult at Trump’s supporters). Why did she need to do more fundraising? The press was saying a couple of months ago that she had almost unlimited campaign cash. Is it possible that she and Bill fear her health problems may either cause her to lose the election, or force her to drop out so some other Democrat can step into the race? Remember, that campaign fund-raising cash, if not actually used to fund a campaign, does not by law have to be returned to the donors. Do you follow my line of thinking?

Think about it, folks: We not only need a capable president, with sensible policies and the well-being of the American people foremost. We also need one not likely to become seriously ill, or worse, just after the election.

← Journeying toward Orthodoxy …
Kaepernick the ass, and a new anthem →

1 comment for “The ‘highest office’? Hillary’s not up to it”