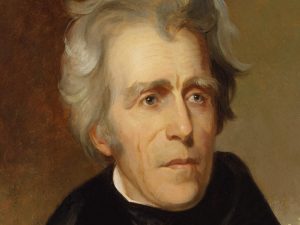 “John Marshall has given his decision. Now let him enforce it.”

That was President Andrew Jackson speaking, when the U.S. Supreme Court, led by Chief Justice John Marshall, ruled that he could not put the so-called “Trail of Tears” into effect. That was the forcible transfer of several thousand Indians from their ancestral homeland in North Carolina and other Deep South states, to the territory which later became Oklahoma, in the early 1830s. In other words, “I have command of the U.S. armed forces, and the state militias. How many regiments does the Supreme Court have?”

That was in the early 1830s, pursuant to putting the Indian Removal Act, passed by Congress in 1830, into effect. More and more White Americans were moving into that area, and they were pressuring the government to move some of the Indians out of there to give the White settlers more room.

And no, I’m not going to get into the morality, right or wrong, of that situation. That’s not the purpose of this column.

Fast forward about 180 years, and we find Donald Trump in the White House. He issued an Executive Order the other day to halt the flow into this country of any resident from seven mostly Muslim Middle Eastern and African countries, for a period of 90 days, so that a more efficient way of vetting these immigrants to keep out Muslim terrorists could be devised.

Naturally the Democrats, who have been trying to block and obstruct everything that Trump has tried to accomplish in his first three weeks in office, immediately arranged for the attorney general of the liberal state of Washington to file a motion to have the Executive Order stayed (that is, halted) for some reasons that sound suspiciously ginned up (to me, anyway, and I suspect to many others). A regional judge who has in the past voiced support for the murderous Black Lives Matter movement, quickly granted the stay.

The government immediately appealed his stay to the 9th Circus — uh, circuit — court, which, surprise, surprise! — upheld the stay. For years the 9th has been the headquarters for the looniest liberals in the American judicial system — and 80 percent of its rulings have been overturned by the Supreme Court over a number of years. Which explains exactly why the Democrats chose the state of Washington for the arranged appeal of the Executive Order by President Trump. They knew that any appeal, would go to the Nincompoop Ninth.

So now, Trump is faced with a hard choice to make — and quickly. Appeal it to the Supreme Court, and wait possibly months for a ruling? And, considering that Neal Gorsuch, his nominee to the vacancy on the court created by the death of Justice Antonin Scalia almost a year ago, is considered likely to tilt the court balance back to 5-4 conservative, the Democrats will do everything humanly possible to delay and obstruct Gorsuch’s confirmation by the U.S. Senate. Because, if the court of just eight members hears the appeal, it likely will split evenly, 4-4, thus leaving the lower court’s decision to stand.

Or — which seems more likely — Trump’s Justice Department could prepare a new Executive Order, written more precisely to specify who from those countries will be exempt from the three-month ban, and issue it, possibly as early as Monday. Then, of course, the Democrats will arrange for another state attorney general to file a motion for a stay of the order, presumably for the same reasons. And if THAT stay is also granted, then what should Trump do?

Well, here’s my opinion. The three branches of our federal government are co-equal. They do not, under our Constitution, have the power to order each other around. Specifically, the 9th Circuit Court, AND the Supreme Court, cannot legally order the president of the United States to halt something he’s doing, or to do something he views as being detrimental to the safety and well-being of the American people.

And Donald Trump does NOT like to lose, and he’s an expert at getting his way. So, my advice to him if he asked me, would be:

“Mr. President, if you believe the 90-day halt to all immigrants from those seven countries is an essential part of keeping the American people safe from possible terrorist attacks; if you believe that the ordering of that halt is within your legal powers as president, and if your legal advisers agree; then I’d go ahead with issuing another Executive Order, re-worded to hopefully be more acceptable to the almighty judges.

“And if they try to stop you through the courts, again, I’d tell the courts that you’re the president, and they’re not, and that they don’t tell you what you can and can’t do.”

John Roberts has given his decision. Now let him enforce it.

← ‘Hatred’ can be directed many ways
Remembering the Rascals — and Pete →