Gov. Rick Perry of Texas came late to the ranks of Republican hopefuls for the right to face President Obama next year for president. But once in, he zoomed clear to the top of the polls. 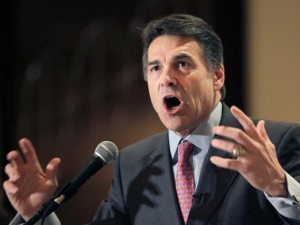 If one goes by experience; a proven record of fashioning a state climate that creates jobs; political canniness; the ability to raise lots of campaign funds; and being capable of attracting Hispanic votes, Perry is a perfect fit for the Republican presidential nomination for 2012. He’s still holding onto that top spot. But the Republican party appears to be wavering right now, hesitating, having second thoughts — in short, appears to be considering turning to someone else instead of the three-term governor of a state that is bigger than many nations in this world.

Hey, GOP’ers, how about Bob Dole, or John McCain?

OK, I’m being a smart aleck — obviously. But it wouldn’t be the first time that Republicans have snatched defeat from the jaws of victory. They nominated Bob Dole in 1996. Remember him? Old (72) guy with a gimpy arm and a tendency to sound grouchy, running against a young (50 then), vigorous (just ask Monica Lewinsky!) incumbent Bill Clinton. You know what the result was — four more years of Mr. Bill.

And there was 2008, with a number of youngish, attractive candidates seeking the GOP brass ring to try to extend George W. Bush’s eight years to 12. So who did the Republicans turn to? Old (72) guy with arms stiffened by five years in a North Vietnamese prisoner of war camp, a somewhat moderate record (which suddenly became more conservative each time he ran for re-election to the Senate), a rather boring speaking style, and a tendency to flinch away from playing political hardball when it was necessary. And of course, the Democrats had a young (47), charismatic, black (well, half-black) senator still wet behind the ears who could yell oratory in stentorian tones with the best of them, and with whom the mainstream media (and Oprah Winfrey) fell madly in love. The result? Another Republican nominee who made a gracious concession speech. Big deal.

If a Democrat such as myself may hazard an opinion here, Rick Perry is “The One.” He’s the one who can beat Obama. He’s the one with an air of being a slightly weather-beaten (but handsome, according to the women) Texas sheriff who has just arrived in town, and is gonna kick some ass, podner. And don’t ya give me no guff, either — savvy?

He doesn’t back down, and he knows what he believes. He is, as one Texas commentator wrote shortly before Perry entered the presidential race, “a hard man.”

With the good hair, the hard stare, the sharp clothes (look at the other male candidates in the Republican debates; they all look like they’re wearing sackcloth), he’s got the “visual thing” down cold. He LOOKS presidential.

But ever since last Thursday’s debate in Texas, in which Perry didn’t exactly cover himself with glory, the pundits have been saying he may have “severaly damaged his chances” for the nomination, that he “offended” conservatives by suggesting they had no hearts if they didn’t agree that illegal immigrant youths who were brought to Texas as young children should pay state tuition rates in Texas colleges, that his “Ponzi scheme” remarks about Social Security will scare Grandma and Grandpa into scurrying back over to the Democratic side.

Fox News has been the worst offender here. Never has been heard a complimentary word about Rick Perry since Thursday night, from the minions of Fox. I suspect a good part of this is due to Karl Rove’s being a full-time Fox commentator. As one of George W. Bush’s chief aides, he appears to have had his differences with Perry over the years since Bush’s departure for Washington put Perry, then lieutenant governor, in the Texas chief executive’s office, and I suspect his apparent desire to puncture Perry’s balloon is influencing his colleagues. 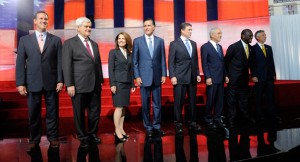 But other news organizations have been playing “jump on Perry,” too. And I don’t quite understand why. Yes, he speaks more slowly than most of the other candidates; Southerners and Texans tend to do that. Former governor Mitt Romney of Massachusetts, former senator Rick Santorum of Pennsylvania, and Rep. Ron Paul of Texas, all took their swipes at Perry as the front runner, in the debate; and all showed they could talk louder and faster than he could.

One big reason that Perry didn’t come off better than he did last Thursday was that he was being beaten like a rented mule by the other candidates (and I know that happens to front runners). It’s kind of hard to defend yourself from seven or eight assailants at once. I think, all things considered, he did a pretty good job of it.

And he hasn’t hesitated since then. He doesn’t seem like a man who is prone to agonizing reappraisals, of saying, “If only I had —” I don’t think that’s Rick Perry. I think he believes in going onward and upward.

So that’s what I think about Rick Perry. If I were a Republican, I could vote for him in a heartbeat. But, the GOP may talk itself out of him. They’ve done things like that before. 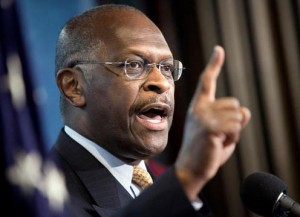 Of course, if business magnate Herman Cain, who won the Florida straw poll over the weekend, were to become the Republican nominee, it might be, in a way, the ideal candidate to put the Democrats in a hell of a quandary. The jibes about conservatives being “racist” would ring pretty hollow with a black GOP nominee. Democratic ad mavens would have to be careful about how they attacked the Republican nominee, for fear of sounding “discriminatory” themselves. Black voters, accustomed to routinely giving 95 percent of their votes to the Democrats, would no doubt feel torn: Vote for their preferred party, and a black president? Or cross over and vote for the first-ever black Republican presidential nominee, who also has a lot of charisma, and has actually accomplished something (besides writing two autobiographies by age 34, and lecturing at law classes, as Obama has)?

Matter of fact, maybe the best choice for the Republicans would be a Perry-Cain ticket.

Or a Cain-Perry one. Flip a coin.

1 comment for “GOP will miss good chance without Rick Perry”