The Jefferson County Public Library finally has a new director, announced today. He’s Brent Stokesberry, currently at the La Porte County Library in La Porte. And he grew up in Des Moines, Iowa.

Now, that last fact may seem like it’s in the “neither here nor there” category, but hear me out on this.

Have you ever heard of “Dewey, the library cat”? Well, he wasn’t a fictional character. He was a real, live feline, who was the unofficial host and mascot of the Spencer, Iowa, Public Library from the day he was found, a tiny kitten, dumped into the overnight book-return box, in January 1988; until his death from a massive tumor on Nov. 29, 2006.

Vicki Myron, the library director there for a number of years (how did they get her to stay so long?) became Dewey’s “Mommy,” the person who was most special in his life. But Dewey was an outgoing, gregarious cat who liked everyone and seemed to realize he was “special.” He greeted patrons at the door during library hours; he would jump up onto people’s laps as they sat reading (some would shove him off again; if rebuffed a couple of times, he would go on his way). He might turn up stretched out in one of the stacks, right next to the book you were seeking; or on the library director’s desk, where he might start “playing games” with her pencils or papers if he thought she looked tired or frustrated; or you might see him sprawled regally in his own special, cat-king sized bed in the library. Or flat on his back, awake, in a certain area of the library, watching his world go by from that position, each day at about the same time.

Patrons of Spencer grew to love Dewey (his full name: Dewey Readmore Books. You could get papers on him.) The children especially would look for him as soon as they entered the library. He was the community’s favorite, most-prized pet. He would even on occasion appear as the library board began its meetings, jump up onto the long table, and walk down it, “greeting” each member.

Word about Dewey got around. Many TV stations, cable networks, and newspapers sent reporters and camera crews to Spencer, Iowa, to record the handsome cat’s daily activities for posterity, and to interview Myron; other library assistants; and patrons, about their favorite four-footed friend. Myron wrote a book about him, “Dewey the Library Cat,” after his death. Dewey’s on YouTube; on Facebook. People in many countries now know who Dewey was, what a good-looking cat he was, how intelligent and special he was.

So, you’re saying, what does this have to do with our library? Funny you should mention that.

The Jefferson County Public Library has had a hard couple of years, with a bunch of bad publicity over firings of employees, a feeling among many patrons that it was a cold, “Big Sister is watching you” kind of place, a director, now departed, who seemed to play favorites and carry grudges. A cloud settled over the library in the last couple of years; one that hasn’t completely lifted.

The library, in short, needs something to “humanize” it, so to speak, for its patrons; something that people would look forward to when they put their hand on the front door to enter. 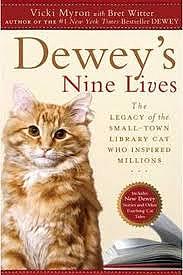 Spencer, Iowa, had a library cat. Is there any good reason that Madison, Indiana, couldn’t have one, too? I think a cat, chosen carefully as a kitten for lots of potential personality, a nice appearance, good temper, etc., would be just the thing to bring some good publicity to our library. It would be something that not every other library has. In fact, I doubt that many do.

I talked this over with one of the library assistants one day. She said she had had the same idea, but that when she mentioned it to — oh, someone above her in the library hierarchy, the reply she received was something to the effect of, “Oh, so many people are allergic to cats nowadays.”

Well, excuse me, but that’s a lot of hooey. For those of you who, like me, live here in Madison, it’s so typical of the Madison reaction to new ideas: Find a dozen reasons why they won’t work or can’t be done, instead of one why they are doable. To say, “We can’t have a cat because ‘so many’ people are allergic to cats (how many is ‘so many’?)” is simply a longer way of saying, “We don’t want to fool with it.” It’s like saying, “Oh, we can’t put a stairway in this public building because, what if somebody fell down the stairs, and then sued us?” In other words, Don’t be proactive on anything, because something might go wrong, and then what?

So, to put it bluntly: Do we need a library cat? In my opinion, yes, we do. He or she would be a big addition, a great way of softening the library’s currently rather “hard” image in this community.

How about it, new director Brent Stokesberry? Dewey came from your home state. Spencer, Iowa, set us a good example. Don’t you think Madison, Indiana, should follow suit?