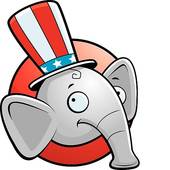 The U.S. unemployment rate is still far higher than any president wants it to be in the year he’s seeking re-election.

Public unhappiness with the direction the country is heading is astronomically high. Americans are worried — REALLY worried — about the future of what President Reagan once called “A Shining City on a Hill.”

Republicans are strongly united in their desire to make Barack Obama a one-time president.

So, a GOP takeover of the White House should be a cakewalk in November — right?

Uh, no. Anybody wanna bet ten dollars (no, not ten thousand, Mitt) that the GOP will fumble the ball as it has before, and wind up seeing the Mulatto Messiah re-inaugurated for a second term? Any takers? You’re missing a good chance, folks …

People who know me, know that I’m a lifelong Democrat. My late father would turn over in his grave and come back to haunt me if I ever said anything different. So I guess I should be delighted at the prospect of the earnest, but often politically clumsy, Republicans, being hoodwinked and end-run once again by the clever, anything-to-win Democrats. But I’m not.

You see, I despise Barack Obama. I always have. I think this country made one of its biggest mistakes when it elected him. He’s of shady background, had no executive experience before being elected four years ago, has associated with sleazy Chicago politicians for years, and shamelessly plays the race card whenever he thinks it will be to his benefit.

But, he was elected, and he’s the president. Although we Caucasian Americans gave him only 43 percent of our votes — so don’t blame us. He was put in by the minorities, at least some of whom saw voting for him as a chance to “stick it to Whitey,” with Oprah Winfrey and the mainstream news media as his cheerleaders. Having “our first black president” trumped everything else — including common sense.

Obama has been, I believe, a divisive, ineffective president, who appears to be more interested in his own re-election than in doing what’s best for the country. But a certain amount of his incompetence has been obscured during the past year or so by the actions of the Republican-controlled House, and more recently, by the dog-eat-dog nature of the race for the Republican presidential nomination.

Again and again, the House, which the mainstream media would like you to think is controlled by the Tea Party and marches in lockstep to its commands, has managed to look obstructionist by opposing Obama policies with which it disagrees. Of course Obama is going to say the House is a “do nothing,” that it wants to “give tax breaks to millionaires and billionaires” while caring nothing about working people. That’s what Democrats always say; that’s what juices up their base — envy of the wealthy. But the Republicans haven’t done a good job in answering that charge. Not good at all.

The latest example was the two-month extension of the payroll-tax holiday. Obama had said he wanted to extend it for a year. The Democratic-controlled Senate then extended it for just two months. Then the House said, no, we want it extended for a year as the president requested. Of course, Obama then jumped in to say that, with 2011 running out along with the deadline for the extension, the Republicans “didn’t care” if working people’s taxes went up. At the 11th hour, the House caved in, making it look like an Obama victory. Obama stole the Republicans’ clothes while they were in swimming, and they still can’t figure out where those clothes went.

Now, the GOP presidential candidates are attacking each other with machetes, so to speak, while the Democrats watch in great glee. But former Massachusetts governor Mitt Romney has led in a large majority of polls since the start of the race early last year, with other candidates taking their turns at rising to the top, then dropping like stones again. Polls have consistently shown that, if a Republican can beat Obama, it’s most likely to be Mitt Romney.

So you’d think rank-and-file Republicans would be saying, either, “Yeah! Romney! He can beat Obama! So I’m for him!”, or, “Well, he’s not my first choice, but if he can beat Obama …”, or at least, “Romney?! He’s a moderate! He’s a Mormon! I don’t want to vote for him! But I sure don’t want four more years of Obama. So I’ll hold my nose, enter the voting booth, and …” You’d think they’d be saying that, almost universally.

But they’re not. Instead, Romney has struggled to get even one percentage point above 25 percent in national polls. Rick Perry, Herman Cain, Ron Paul, Michelle Bachmann, and Newt Gingrich have taken turns making runs at him, getting a point or two — or more — ahead; then fading for one reason or another. Rick Santorum managed to come within nine votes of defeating Romney for the Iowa caucuses on Tuesday, mainly by dint of herculean efforts on the ground there.

But Republican primary and caucus voters seem to be saying, “I want Obama out of there. But I don’t want this one; no, not that one; no, the other one’s not conservative enough; no … no … no …”

They sound in a way like the 2-year-old who screams, “No! No! No!” to everything he’s told to do. They seem to be waiting for the Man on the White Horse, the Perfect Candidate.

My reluctant Republican friends, let a Democrat who agrees with you on the presidency, at least, give you a piece of advice: Get your act together. Stop waiting for Sir Galahad. He ain’t coming; they hauled the Round Table away a long time ago.

You don’t like Obama? You think he’s ruining the country? You want him out of there? I agree. But you can’t beat somebody, with nobody. You’re going to have to make a decision, pick a winner, and soon. And the polls say that Mitt Romney is the one who can do the job, whether you like him or not.

And who should he pick as his vice presidential running mate? Well, I suppose you could make a case for several of the also-rans. But when I watched Rick Santorum addressing his supporters on Tuesday night after the results were in, I was impressed. He seemed to know who he was; he seemed to be able to address a crowd without sounding boring, or shrill, or faux-good old boy. Romney has experience as a governor, and in business; Santorum served 12 years in the Senate. He could be a good liaison with the Congress for a President Romney.

Besides — and this is strictly a personal preference — these two men could serve as good examples for us White folk that we need to raise families, if we don’t want to gradually just vanish from the earth. Romney has five children; Santorum, seven. Any two guys who can father 12 children between them, 12 children who are highly unlikely to ever draw food stamps or SSI, can’t be all bad.

Why do I have a fondness for large families like this? Easy: My mom was one of 13 children; my dad, one of five. It’s genetic, you see.

← Reflections on Benji’s Christmas moon
Purity or ability? Republicans have to choose →

9 comments for “Will the Republicans blow presidential race?”