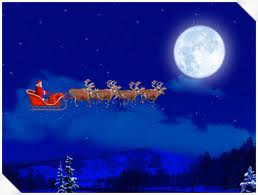 A few weeks ago, a good friend of mine was telling me of photos he had shot, late at night here in Madison. And he made one remark that led me to say, “I think you just gave me an idea for a Christmas story.” Well, Jack, here it is. I hope you like it. Merry Christmas!

Snow fell all day Christmas Eve. But at dusk it tapered off, the clouds dispersed, and there rose in the night sky, a beautiful, round, full Christmas moon.

Just the thing to attract an amateur, enthusiastic photographer like Harry Larrabee. Harry was a retired electrician, and ever since he put away his tools permanently, the camera had occupied all his spare time. He had gotten pretty good with it, too, shooting still lifes, photos of his grandson Benji, who lived with Harry and Donna, his wife; sports photos, pictures at serious fire scenes (he was a volunteer fireman, too, but at age 65 he wasn’t expected to rush into burning buildings any more; he had time to record the blazes for posterity); nature photos, and many others.

“Donna, I’m gonna get some shots of this moon,” he said in the evening hours after supper, donning his heavy coat and cap with the ear flaps. “If I time it just right, I should be able to nail some really pretty ones when it’s right over the Christmas tree in the front yard.”

Harry, Benji and Donna had decorated the tree with ornaments and electric lights a few days before, and it was a beauty. It had stood there for years, but it wasn’t until Benji, age 7, said this year, “Hey, why don’t we decorate the big tree? It’ll look so neat, right out in front of the house!” that it had occurred to Harry and Donna that they had a treasure, standing right there in plain view.

“Sounds good to me,” Donna said to Harry’s plan for moon shots.  “Benji! You want to come out with Papaw and me while he takes pictures of the Christmas moon?”

“Heck, yes, Mamaw!” little Benji yelled, rushing toward the door. “Get your coat and toboggan on, young man! You want a cold for Christmas?!” his grandmother called after him. Benji grabbed them from the chair without missing a stride, was struggling them on as he followed Harry out the door. Donna brought up the rear, leaving the living room to be watched over by the big, old wall mirror that Benji had found in the basement a few days before.

The boy had lugged the mirror upstairs, somehow managing to do so without breaking it or smashing something with the edges of it. Harry and Donna had no idea it was down in the basement of the house they had lived in for years. It looked old — very old. It had ornate decorations around all four edges. They looked vaguely like Christmas decorations, but oddly quaint — like something one might have seen long, long ago. Harry hung the mirror on the wall, and none of them gave it much more thought.

Harry set up his tripod parallel with the outdoor Christmas tree, mounted his digital camera on it and waited. Benji ran around in the new-fallen white flakes, occasionally mushing together a snowball and hurling it as far into the night as he could. Donna shivered, walked about to help keep herself a little warmer, wishing silently for a quick progress of the moon to the spot Harry wanted for his photos.

Harry was oblivious to the cold; he was oblivious to everything when doing photography. He watched the moon as it rose, slowly, steadily, first even with the wide base of the outdoor Christmas tree, then inching up through the branches, visible between them here and there; and finally shining right through the star on the pinnacle of the tree.

“It won’t be long now!” shouted Harry, as excited as a child. Donna shook her head, shivered again, finally said, “Harry, I’m going inside before I freeze out here. I’ll be getting hot chocolate ready for you guys, whenever you get around to coming in. Benji, remember this is Christmas Eve and you need to get to bed soon, or Santa won’t come!”

“That’s nice,” Donna answered, and the outside door slammed behind her.

“I got it! I got it, boy! It was great!” Harry yelled, giving Benji a hug. The boy was just as excited. “Man, Papaw! You’ll have some great pictures there! Let’s take ’em inside and put ’em on the computer!”

They hurried inside. Donna — Mamaw — had the hot chocolate all ready. “Well, did you guys get what you wanted? Are you frozen stiff?” she said. “Nah, Mamaw. You should have seen the moon, right on top of our Christmas tree!” said Benji, gulping down his first swallow of hot chocolate. Donna had put out Christmas cookies, too, and her menfolk tucked into them hungrily, their appetite heightened by their stay in the cold and their excitement.

But the warm chocolate and the increasing lateness of the hour started to work their drowsiness. “Come on, youngster; you’ve got to go to bed and get to sleep, so Santa can come,” Donna said. “Now scoot! I’ll be up to tuck you in. You can see the photos tomorrow.”

“Awww, Mamaw, I’m not sleepy,” he protested. But Donna pointed to the stairs, and Benji sighed, “Oh, OK. But I wanna look at the pictures first thing in the morning. After I see what Santa brought, that is.”

Donna and Harry kissed their grandson good night, and he walked up the stairs, slowly, looking back at the inside Christmas tree in the living room, where his gifts would be waiting the next morning.

Shaking off his drowsiness, Harry put the disc from his digital camera into his computer and started studying the photos. Yes! he thought; I got some great ones. Suddenly he stopped, studied one closely, and said, “Hey, Donna, look at this.” She came over, leaned over his shoulder at the computer, straight across the room from the old mirror on the wall.

“See right here?” he said, pointing to the photo of the moon. “Look, going right across in front of the surface — a jet plane; airliner. You can even see the contrail!”

“Wow!” Donna said. “You clicked at just the right time, didn’t you? Ya got lucky!”

Harry and Donna spent the rest of the evening putting out Benji’s gifts — and their own. It was late when they finally finished and went wearily off to bed.

Bright and early next morning Benji was rushing down the stairs in his pajamas, yelling, “Merry Christmas, Papaw and Mamaw! Get up! Let’s open presents!”

“Oh, shit,” mumbled Harry, rolling over. “We might have known this would happen. What time is it, anyhow?”

“Too early,” groaned Donna. “Well, let’s get up and go down there to share his Christmas.”

When the last set of gift wrapping had been torn apart to reveal its hidden treasure, Benji stopped what he was doing and said, “Now, Papaw, let’s see your pictures!”

Harry padded over to the computer (he was still in pajamas and slippers), booted it up, and re-inserted the disk. He let Benji sit in the chair right in front of the screen and start going through the photos. The boy stared closely at each one, saying, “Wow!” or “Neato!” Suddenly he froze, gazing at the shot with the object crossing in front of the moon.

“It’s him!” Benji shouted. “It’s Santa with his reindeer and all the toys, for all us kids all over the world!”

Harry and Donna both started, looked at each other, then Harry said, “Well, Benji, I suppose it could be. But your Mamaw and I thought it looked like a big airplane, flying through the sky.”

Benji looked at him, shock written on his face. “Papaw! It IS Santa! It’s as plain as anything! Can’t you see it? Can’t you, Mamaw?”

Both hesitated, unwilling to pop their grandson’s bubble, but unable to enthusiastically agree with him when their eyes showed them only a jetliner.

“Well, uh, Benji, honey, maybe it is Santa, to your eyes. It’s all in what you want to see,” Donna said.

The two adults hardly knew how to reply to that. Finally Harry said, “Well, Benji, we’ll talk about it some other time. You’ve got a new sled there; how about we go and try it out?”

“OK, Papaw,” the boy said cheerfully. But under his breath, he added, “I do believe in you, Santa; and I can see you. I really can.”

The two quickly got dressed, bundled up and went out, sledding up and down the hills near the house, with whoops and hollers galore. At noon they came in for Christmas dinner. Benji’s father, Harry and Donna’s son, was in prison, and his mother, drug-addicted and incapable of caring for her young son. That’s why he lived with his grandparents. Harry and Donna’s other son and daughter and their children, Benji’s cousins, arrived to share dinner and open presents. Everyone enjoyed a rollicking Christmas, and the moon photos were forgotten by Harry, Donna and Benji.

Until that evening, when Harry sat alone in the living room, the slide show of moon photos pulled up again. He stared and stared at the one with the object, even put a magnifying glass to it. Nope; still a jet plane with its contrail.

Leaving that photo on the screen, Harry got up, thinking to himself, “Kid’s got a vivid imagination. Maybe he’ll be a writer some day.”

The big antique mirror was on the wall about ten feet directly across the living room from the computer. As Harry walked past it, he glanced into the mirror — and froze in shock.

Reflected in the mirror was the moon shot. Harry stepped closer, looked intently, not believing his own eyes. There, instead of the plane and contrail, was the familiar silhouette of a sleigh, eight reindeer pulling it, and a rotund, Santa-hatted figure seated in the sleigh, a big pack behind him. The reindeers’ legs were moving. The Santa figure snapped his whip over their heads, yelling encouragement — which Harry could hear — faintly. And underneath the sound of Santa’s voice, he could distinguish sleigh bells.

Suddenly he heard a voice at his elbow. “See, Papaw? If you believe, you CAN see him!” It was Benji, who had slipped in. He was looking past Harry at the reflection.

“B-but, Benji, I don’t understand … I was looking right at it, and it was the plane, just like I said. And then I turned to this mirror, and … and …” Harry stammered.

“I don’t know, Papaw, but I can tell you really see him now,” Benji said, with a big, happy smile, grabbing his grandpa by the hand.

When she came in from the kitchen, her face became as shocked as his as she looked from the computer screen, to its reflection in the mirror. “I can’t believe it! How is this happening?” she said.

Benji thought for a minute. Then he said, “I didn’t really look at the back of that big ole mirror when I brought it upstairs. Did you?”

Neither of his grandparents had. Harry removed the mirror from the wall, looked at its dusty, long-aged back.

They finally noted, down in one corner, very faint lettering. Harry got his magnifying glass and all three looked closely at the writing. They read:

“This mirror I fashioned to aid those who cannot see what they do not believe in. He who believes, also shall he see.

Benji gazed with wonder from one grandparent to the other. And he said, “See? I told you you gotta believe! Merry Christmas!”