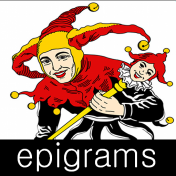 What’s an “epigram”? Well, it’s a short, pithy saying with a surprise at the end, some wit, and a kernel of truth. Like Oscar Wilde’s, “I can resist anything but temptation.” Or Will Rogers’, “I belong to no organized political party. I am a Democrat.”

Years ago, before I’d ever written any fiction, or poetry, or anything really except newspaper stories, I hardly even knew what “epigram” meant. But then one day, a couple of short, ironic phrases popped into my head. I thought they were funny, and wrote them down. That was all, for a while.

Then, for some reason, I started noticing that when I would get drunk occasionally (OK, two or three times a week — but I’ve  been in recovery for 15 years), after the second or third drink, I’d start getting these flashes of what you might call, “humorous wisdom,” about life, people, etc. I’d write them down.

This went on for a while, and I finally started typing up these “epigrams,” as I glorified them, and printing them out. I’ve still got many of these.

My epigrams kind of dried up when I quit drinking — which might tell you something about alcohol, or me, or more likely both of us. But I’ve kept the pre-sobriety ones, and I’m going to unload some of them on you below. You may like some, or all, or none. I don’t custom-write; I say what I think. I’ve stepped on toes before, and if any of you comment on these, I won’t be surprised if I hear some yelps of outrage. That’s OK; I write to provoke as well as entertain.

Keeping a supply of liquor on hand is like having a pet: It’s there when you need it, it doesn’t make judgments about you, and it helps you to feel better when you’re down.
——
Two kinds of men are always assured of attention from women: The kind of men who have a loud, clever line of patter; and old, charmingly senile men.
——
Nearly all ethnic stereotypes can be summed up in one of two ways — either, “They’re dirty, lazy and promiscuous,” or, “They’re clever, avaricious, and unscrupulous.”
——
The good thing about having Alzheimer’s is that you meet new people every day.
——
Never use a preposition to end a sentence with.
——
When you’re little, the big girls kiss you; and when you’re big, the little girls kiss you.
——
One of the nicest things about books is that they don’t make noise late at night.
——
Most people who wear hats do so because they’re making some kind of a fashion or social statement — not to keep their heads warm.
——
Cynics detest happy endings because they remind the cynics of their own smashed idealism.
——
A greedy politician is like a shark with a head at each end.
——
Given enough time, voyeurs and exhibitionists always find each other.
——
Some people like to say that by eating too much we’re “digging our graves with a fork.” Well, it’s sure more fun than doing it with a shovel!
——
Money is like booze — it can’t buy happiness, but it can keep your mind off your troubles.
——
If you don’t believe that love is blind, just take a look at the average married couple.
——
There is nothing wrong with a newspaper’s offending people on occasion. But it should make sure that it offends them for the right reasons.
——
A sense of perspective involves knowing where to stand.
——
I lost all desire to swim when I learned that humans can’t breathe underwater.
——
White liberals are always tenderly solicitous of the rights of minorities — as long as those minorities are darker-skinned than the white liberals.
——
The same people who will react with smug pride if called “people of color” would be hopping mad if you called them “colored people.”
——
You know you’ve become middle-aged when you wake up in the morning with a new pain and you’re not even curious about what it is.
——
I’ve heard country music called “blue-eyed soul.” Turnabout’s fair play: Why don’t they call soul music “black-skinned country”?
——
There’s no cure for being an idiot.
——
Loneliness often is not due to lack of companionship. It’s something the lonely carry around with them, like leprosy. And other people tend to avoid them because they fear it’s contagious — like leprosy.
——
Bigot (n.) — Any White person who refuses to feel guilty because a few thousand other White people owned blacks as slaves 150 years ago.
——
Death to all extremists!
——
God save us from true believers!
——
Three things will cause a hiatal hernia to flare up: Cigarettes; coffee; and assholes.
——
When someone says, “It’s not the money — it’s the principle of the thing” — it’s the money.
——
The four biggest lies in the English language: (1) Black is beautiful; (2) The check’s in the mail; (3) I won’t come in your mouth; (4) We’ll invite you over for dinner some time.
——
Meetings, speeches, sermons and prayers should always be brief.
——
True friendship is never making a friend feel you’d much rather be talking to someone else.
——
When a politician starts telling you how honest he is, check to make sure your wallet is still there. If he says he’s “just a good ole country boy,” keep your hand on the wallet.
——
The only consolation to being poor and friendless is this: You don’t have to wonder if people are being nice to you just because of your money.
——
Every time I hear a divorced person laying to filth their former partner, I’m tempted to ask, “Was this person walking pond scum when you married them, or did they get that way from living with you?”
——
Those who spend their time collecting grievances, will accumulate little else.
——
The frequency with which men refer to women as “bitches” is roughly matched by the frequency with which women refer to men as “jerks.”
——
One of the things people are most unforgiving about is if you’re right all the time. People who are often wrong at least allow us to feel superior.
——
Keep one thing in mind about criminal trials: The witnesses are under oath — and the lawyers aren’t.
——
My god appeared to me in a divine vision. You conjured yours up out of whole cloth in order to accomplish your nefarious purposes.
——
When someone else’s congressman passes legislation to benefit his district, that’s “pork-barreling.” When my congressman does the same thing, that’s “bringin’ home the bacon.”
——
Women often are attracted to the kinds of young men who are good-looking, hail-fellow-well-met, “fun,” the veritable “life of the party.” Then when they marry these young men and find that they’d rather “party” than work, and be responsible, good husbands and fathers, the women are disgruntled. But point out a young man who is sober, industrious, and willing to take responsibility, to those same women as a possible mate, and they’ll say, “Oh, he’s BORING!” It’s all in what you want: You can have a playmate, or a life-mate.
——

A politician who speechifies about “compassion” and “fairness” and “equality” is like a magician. The magician distracts your attention so you won’t notice how he performs his tricks; the politician overwhelms you with “feel good” language so you won’t feel his hand removing your wallet.

← Purity or ability? Republicans have to choose
“It Can’t Happen Here”? Don’t bet on it →

12 comments for “Old Corporal’s words of wit and wisdom”