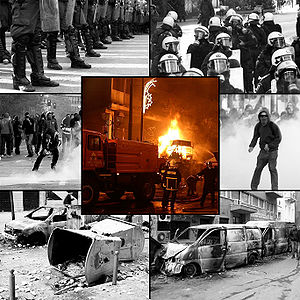 Rioters burned and trashed downtown Athens, Greece, this past week, protesting the severe austerity measures that the country’s Parliament is being forced to take to obtain a European Union loan and avoid national bankruptcy.

Protesters raised seven kinds of hell in London last year because of similar austerity measures. Riots have struck Madrid, Spain, cities in Italy, and Paris, France since the big economic meltdown hit Europe, the homeland of most of our ancestors here in the United States.

But it can’t happen here — can it?

Back in 1935, the American novelist Sinclair Lewis published a book entitled, “It Can’t Happen Here.” It told of an America in which a fascist dictator is elected president, and proceeds to take the country down the road to tyranny, nationwide bloodshed, and the death of the Constitution. Of course, Lewis’s book came at the worst part of the Great Depression, and in Europe, Benito Mussolini was riding high in Fascist Italy, while two years before, a spell-binding, bitterly anti-Semitic dictator named Adolf Hitler had been appointed chancellor of Germany.

The left-leaning Lewis obviously thought that what he perceived as a right-wing dictatorship would be the worst disaster that could possibly befall his native land. He didn’t appear to view leftist dictatorships with the same fear, as two of the minor characters in the book are garage mechanics, one a Communist, the other a Socialist, who good-naturedly argue their respective creeds as they repair smashed fenders and cracked engine blocks. Just two of the 99 percent, working men toiling to make a living, as a certain American politician of 2012 might word it.

We’ve always felt that “it can’t happen here,” whatever the horrible things that befell people overseas were. World Wars I and II were fought in Europe, Asia and Africa. The atomic bomb fell on Tokyo. The Holocaust happened to European Jews, not American ones.

Not all the things that happened overseas, but “not here,” were connected with the war. It was in Europe, not America, that extensive social welfare safety nets were woven to provide “cradle-to-grave” security for every citizen. European nations instituted “free” health care for everyone. Pension plans were everywhere; people could retire at 60, 55, 50 …

Oh, sure, we had Social Security, and Medicare, and SSI, and Section 8 housing, and the like. But we didn’t go nearly as far as our European cousins. For one thing, we were providing a military umbrella — both nuclear and conventional — for them, so they would have more money to spend on “peaceful” pursuits, such as trying to eliminate all risk or poverty for their people. Even in the America of years ago where our national wealth seemed unlimited, there was not enough left over for such an extensive social “safety net.” For another, there was a feeling in America that it was not quite right to try to micro-manage life for every American, even if the stated aim was making that life “better” for those of more limited means.

So America was a few years behind Europe in blithely marching toward Armegeddon. They didn’t see the edge of the cliff they were approaching until it was too late; we weren’t even aware there WAS a cliff.

Then there’s the matter of fertility rates. Ours is just over two children per American woman of child-bearing age. Europe’s, taken as a whole, is far below that — disastrously low, as a matter of fact. Europe found that funding its extensive public welfare programs was becoming harder and harder with too few young people coming into the work force each year. So the Europeans had to start letting in huge numbers of North Africans, Turks, other Muslims, black Africans, Eastern Europeans, to fill out their work forces. That policy has started permanently changing the national character of many nations among our European cousins.

We’ve done the same with Latinos — mostly Mexicans — but it hasn’t gotten as bad here — yet.

So as we watch Europe, the Europe the ancestors of most of us came here from, slowly crumbling as its leaders frantically scramble to turn it from its pell-mell rush toward the cliff, we often shake our heads, sympathetically, and say, “How sad; how very sad. But of course, it can’t happen here.”

Let’s all hope that’s true. Let’s hope we’ve become aware that there is a cliff there, and that we’ve still got time to avoid plunging off it.

But don’t bet the rent money on it.