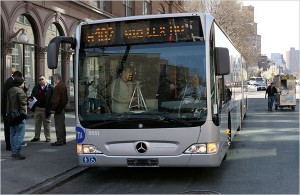 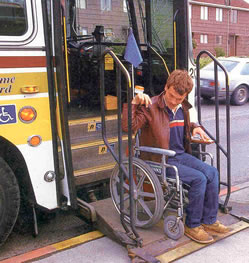 “Why care about Hammond’s buses?” asked the headline on an opinion piece which appeared in The Madison Courier this week. The piece was written by Morton Marcus, an independent economist, writer and speaker, and it pretty much summed up the attitude of many Americans — especially in the Midwest — toward our urban mass transit.

You see, the city of Hammond, IN, is likely to lose its municipal bus service June 30.The service has been hauling, on average, 30,000 riders a month for many years, but according to Marcus, the Regional Bus Authority (RBA) is nearly broke, the city of Hammond has refused to take over the service, and the Lake County Council apparently is seated complacently, willing to see a mass transit system in a major city in its county go under, rather than raise either taxes or fares to save it.

After all, I’ll bet none of the county councilmen has to rely on RBA to get anywhere. “Let those bus riders either buy a car of their own, or walk,” seems to be their attitude. And of course, it’s the attitude of a significant number of Americans, especially in the Midwest. All of whom have their own cars, by the way.

We Americans are said to have a “love affair with our cars” — or, in this day and age around southern Indiana, more often, our trucks. A man who doesn’t own his own vehicle often feels somehow neutered, castrated, somewhat less of a man than his fellows who can swap stories about how they “talked down” the car salesman from his ridiculously high price, or how many miles a gallon their motorized phallic symbol gets, or how gas “went up 10 cents today.” We are our personal vehicles, and our personal vehicles are us. Most of us can’t imagine living without one. I’d say women aren’t as emotionally invested in their vehicles as men are, but they wouldn’t want to live without them, nevertheless.

But the fact remains that some of us — like me — don’t own a vehicle. Some can’t afford one, or are temporarily without one; others (again, like me) could afford a vehicle if we really wanted one, but have decided, for reasons peculiar to each person, not to own or drive. Then there are the retired people who, due to a fixed income, or failing vision or reflexes, have chosen to give up their personal vehicles. All of us people need to get around, too. We just don’t want to (or can’t afford to) own our own transportation. And there are more of us than most of you people with your own cars think.

I can remember years ago when I worked at the Courier, and I mentioned more than once that I wished the Madison area had buses. When I did, a fellow reporter would always say, “Well, we don’t need buses around here because EVERYBODY in Madison has a car.” It was the kind of foolish and inaccurate generalization that people often make when it doesn’t affect them directly.

Of course, since that time, Catch-A-Ride has come upon the scene here, as well as in six other southeastern Indiana counties, and thank God they did.  The regional bus service has become an invaluable part of our community for many Jefferson County residents.

Which brings up another point about urban mass transit that Marcus addressed in his opinion piece. He noted that any mass transit system which serves a wide range of neighborhoods and income levels, has to be subsidized to survive. To charge in fares what it would actually cost for Catch-A-Ride, or any other bus service of its kind, to make ends meet, would mean fares that many of the regular passengers could not afford. Hence, the need for subsidies, whether in southeastern Indiana, or New York City, or — Hammond, IN.

The subsidy issue is what really galls many people who drive their own cars — the thought that they’re paying “my hard-earned tax money” so people they often view as being rather beneath them, can ride buses “cheap.” As I said before, when you don’t need buses yourself, you can easily start to view them as an expensive (to you) luxury wasted on the riffraff.

But I’d say to those people, “Low-income residents often ride to their jobs on buses.” They do, indeed; I ride with some on Catch-A-Ride, regularly. They ride to stores, to spend their money, which helps to keep the economy going (OK, it’s not going all that well right now, but hopefully it will come around, eventually.) Parking our public transportation permanently certainly wouldn’t help it to do that. The buses also facilitate lower-income and elderly people’s going to and from the hospital and the doctor. Would you like to offer them free rides there and back in your private vehicle, Mr. or Ms. “My Hard-Earned Tax Money,” if the buses were shut down from lack of subsidies?

Oddly enough, in the same week that Morton Marcus’s call for help to save the Hammond bus system appeared, there was a letter to the editor of the Louisville Courier-Journal, from someone named Michele Dutcher, complaining about a fare increase by TARC, and also about its outreach to other counties in its area, to enable people from those areas who work in Louisville, to ride a bus to work, thus getting some of the tens of thousands of private vehicles off the streets and roads at rush hour.

Just imagine, if you will, that everybody (well, every adult) in this country really DID own his/her own vehicle, as my unperceptive fellow Courier employee always said. Have you seen lately how crowded our interstates are, our city streets, the roads in our county areas which used to be farmland but are now being rapidly developed? Can you imagine how unbelievably jammed they would be if there were no public transit, but universal private vehicle ownership?

No, it wouldn’t be a pretty picture. The drain on our fuel resources would be immeasurably greater, as would pollution from many addition millions of exhaust pipes. It would be a disaster in many ways.

So, you see, mass transit is an important part of our American civilization, as it is all around the world. And the only place that ridership is so large that the system doesn’t have to be subsidized, is Hong Kong. Everywhere else, that “hard-earned tax money” has to come into play, if the buses are to run.

← ‘The People’ to Lugar, Armand: You’re fired!
Madison: A tale of two cities →