The Madison-Milton bridge has been an immovable object in our community for 80 years now. Few living residents of Jefferson or Trimble counties can remember when it wasn’t there. But does that mean that, in the building of a new bridge, the existing pilings of the old bridge should be used, as the area advisory committee voted this week to do? 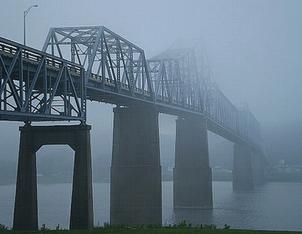 Personally, I think they’re making a huge mistake. Why do I view it so? Let me count the ways …

For one thing, the testimony of  “experts” who have inspected the pilings, who said they are still sturdy and  quite capable of bearing the weight of a new, heavier bridge, is suspect. Ask anyone who has lived in  close view of the bridge for a long time, and they’ll tell you that the number of times barges have struck the pilings over the years is numerous. You don’t have  to be a professional engineer to know that all that impact has a cumulative effect on the strength of the pilings. Would we be taking an unacceptable risk by trusting that they will stand another 80 years, no matter that the new bridge to be built atop them will be rendered heavier than the old, with wider driving lanes, shoulders, and a pedestrian walk? There’s one way to find out — but, obviously, that’s by taking the risk. Do you want to be driving across the new bridge when we find out for sure?

For another, take the fact that there are on an average day about 10,000 motor vehicle trips across the existing bridge, if you count return trips. The proposal to have two ferry boats to substitute for the bridge while it is closed for construction has some serious problems attached to it. For one thing, the ferrys couldn’t come close to transporting that many vehicles in a day’s time. Also, as was reported after the meeting, no vehicle bigger than a panel truck could be hauled on a ferry. Ambulances MIGHT be transportable, the crowd at the Milton meeting Thursday night was told. This should be real comfort to anyone who is the patient in an emergency ambulance run from Trimble or Carroll counties to the King’s Daughters’ Hospital in Madison, while the ferrys are the only direct local link between the Kentucky and Indiana sides of the Ohio River.

But fire engines likely will be much too heavy for the ferrys to haul. This puts a big question mark on the mutual-aid agreement existing between the Madison Fire Department and the Milton Volunteer Fire Department. Milton firefighters rendered important aid in battling  the Jefferson County Courthouse fire in May. What if a major fire broke out among the several businesses situated very close to each other in downtown Milton near the entry to the bridge? Is there any way Madison firefighters could get to Milton to help, with the bridge closed and ferrys too small to haul their apparatus?

Then there’s the matter of commerce, in both downtown Madison and Milton. Many locals are not aware how much business comes into the oldest part of Madison from Milton. And the same thing holds true in reverse. Many Madisonians drive over to Milton for their gas, tobacco, and other items which tend to be cheaper over there. The Madison-Milton bridge has become a two-way umbilical cord for local business in the 80 years it’s been there. We’re so used to its presence, all the time. But wait until it’s closed for a year (probably longer, actually; you know how these “estimates” are; there are not only cost overruns in construction, but time overruns, too.) Many businesses, in downtown Madison, especially, may not survive a major cutoff of their trans-river  trade like the closing of the bridge could cause.

And speaking of the ferrys as I was a minute ago, they generally get paid to haul. It’s not likely that they will operate free of charge. No hint has been given about what a fare for one vehicle might be. Once that’s divulged, or estimated, wonder how many people will drive up S.R. 56 to Markland, across the bridge there, and down KY 36 to Milton — or the exact reverse, starting in Milton — to see which way they can come out ahead financially? Or — more likely — just limit their cross-Ohio trips to the absolutely necessary.

My own opinion is that the proposed route for a totally new bridge, across the river from just west of Milton to link up with Jefferson Street, would have been the wisest choice. The approach to the bridge on the Indiana side at least would be a wide, existing street; and the person driving across from Milton would have a straight shot up U.S. 421 to the hilltop. Preservationists protested that plan because of the four old houses at the foot of Jefferson on the east side. But old, historic houses don’t have to be torn down for such a project; they can be moved. Look at Pearl Park — old houses from a number of areas in Jefferson County were transported there to make an artificial “historic neighborhood.”

It appears to me that the committee has jumped at the chance to get $100 million in “free” money from the federal stimulus plan by deciding on the “re-use the existing pilings” plan. Maybe it will work out. If implemented, for the sake of both communities, I hope it does. But  local residents need to think hard about some of the problems that I enumerated above. It’s better to address them now, while the bridge is still open, than to wait until it’s closed for a long building project, and the problems are staring us right in the face.

15 comments for “Bad choice on the Madison-Milton bridge”