Once again we have seen a sudden, deliberately caused tragedy, this time at Fort Hood, Texas. It was of a much smaller scale than 9/11, obviously; 13 dead at Fort Hood, almost 3,000 at the Twin Towers, the Pentagon and in the Pennsylvania plane crash in 2001. On Sept. 11 the planes were hijacked by murderous, suicidal civilians; in Fort Hood, the military personnel were gunned down by a murderous, deeply conflicted American Army officer. 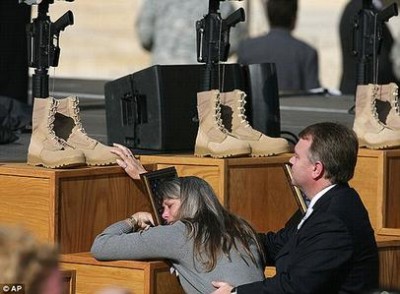 But there is one big identical factor in the tragedies: Both were committed by Muslims. Add to the two American massacres the urban bombings in Madrid, Spain and London, England of recent years; the blast that leveled a nightclub on the island of Bali in Indonesia and killed hundreds of Australian and European civilians; bloody riots by mostly Muslim youths that lasted for days in France in 2005 (but not a one was killed by police; what do they think those guns they carry are for, anyway?!); and countless other episodes of organized, often fatal violence around the world for a good number of years. What is the one constant in all these incidents? Muslims were to blame for all of them. This does not even include Islam’s ongoing rage over the very existence of the State of Israel. That nursed, petted grievance is now over 61 years old and shows no signs of abating.

What has caused such a consistent inability of Muslims to get along with people who don’t believe as they do, all over the world? I can’t begin to answer that question; I’ve never read a page of the Koran, their holy book, and don’t intend to. But it’s my opinion that when people of one particular faith (or totalitarian ideology, for that matter) cause so much turmoil and so many deaths, for so many years, there is something about their faith itself that is wrong-headed, and that intoxicates some of its followers, especially young men, into committing heinous crimes against humanity in the belief  they will go straight to Paradise if they die, enjoy the sexual favors of the 70 Virgins, and so forth.

Is it “racial profiling” to point the finger of blame at Muslims alone? Well, no — Muslims can be of any race; the Arabs who make up a large percentage of their numbers are basically Caucasian, and it’s not “profiling” when the people you’re giving extra scrutiny are much more likely to include men and women bent on homicide bombing, for instance, than, oh, say Swedish grandmothers. We’ve bought this “racial (or religious, or ethnic) profiling” canard, mostly pushed by black militant agitators in this country, hook, line and sinker, but it’s basically a crock. You keep the closest eye on the groups from which most of the murderers have come — and in all these cases, those groups are Muslims.

We’ve been taught to think, “Oh, the vast majority of Muslims are non-violent and peace loving; they don’t agree with this violence.” That’s what all too many of the powers that be, in this country and Europe, want us to believe. But is it true? If you were a Muslim, and were peaceful and non-violent, and these horrible things were done by your co-religionists, and you really were dismayed at them, wouldn’t you want to band together with other Muslims who agreed with you, and mount public protests, issue statements addressed to society as a whole, saying, “As devout Muslims we abhor and condemn these attacks by misguided members of our faith”? Has the so-called peaceful Muslim majority ever done that on any kind of scale? Not so you could notice it. One wonders: Are they indifferent? Are they afraid to speak out for fear of retaliation by the Muslim terrorists? Or do they secretly approve of these atrocities?

Maj. Nidal Malik Hasan, the accused killer of 13 people at Fort Hood, is himself an Army officer — and a psychiatrist to boot. Looks like he needed professional counseling even more than most of his patients.

The usual excuses are now being trotted out to defend Hasan by liberal elements of the news media: He was deeply conflicted about the U.S. fighting against Muslims, and was also — just by coincidence, we presume — scheduled to be shipped to one of the war zones in Iraq and Afghanistan soon.  He was “harassed” by his fellow officers because of being a Muslim (what does “harassed” mean? Didn’t this guy ever participate in all-male thrust-and-parry before? We’re downright unmerciful with each other when it comes to teasing — or sometimes downright, well, harassing.) He was a victim of “racism” because of his faith (obviously unlikely, as he is of Palestinian descent and thus by definition, basically Caucasian).

Let me suggest another possible motive for Hasan: His Muslim faith meant more to him than anything else — more than his fellow soldiers, more than whether he went to Iraq or was executed for multiple murders, more than being an American who couldn’t even speak Arabic. He killed 13 people because they weren’t Muslim, and because he didn’t want to go into a war that he believed was “against Muslims.”

If Hasan lives to face trial, he will certainly be convicted and receive the sentence his crimes merit. If he is executed, then whether or not he gets his 70 Virgins is a matter of opinion — of whether you believe that particular teaching by Mohammed was really true in his mind, or whether it was just a clever lie to get gullible, believing people to do whatever he told them.

But I’ll say this: Instead of worrying about any “backlash” against Muslims in this country; or bending over backward to assure them that we believe 99 percent of them are peaceful, loyal Americans, we should be watching concentrations of them like a hawk. And if anyone wants to call that “profiling,” well, we’ll just live with that.

8 comments for “Let’s keep an eye on the Muslims!”