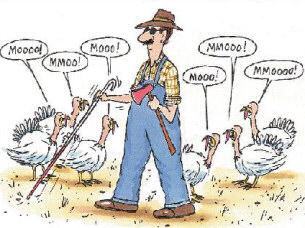 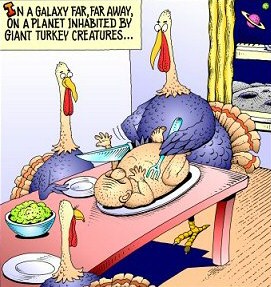 Thanksgiving is approaching — and the turkeys are nervous!

Sorry. I just couldn’t resist that. Sort of grabbed your attention, didn’t it? Wonder what the turkeys are feeling thankful for right now?

OK; I’ll get serious. Because after all, Thanksgiving IS a serious holiday. The Pilgrims started it in Plymouth, Massachusetts, in 1621, in the late fall, to thank their God for allowing them to have a good harvest their first full year in the New World, and for His allowing 51 of them — exactly half the number who had set sail on the Mayflower — to survive the sickness and bitter cold of that first winter. And as the Indians of the area had assisted them with their planting and other aspects of their adjustment to America, they invited the Native Americans to share in the feast.

President Abraham Lincoln instituted the national holiday of Thanksgiving in 1864, during the Civil War. Presumably, the third Thursday in 1865 both Yankees and Rebels gave thanks that the Civil War was finally over. There’s always something to thank God for, isn’t there?

So, as we near the turkey and cranberry and humble thanks day for 2014, what does this world have to be really thankful for? I’ll give you a while to think about it while I go out to dinner.

Ahhh, that turkey and dressing was delicious! Who said you can only eat them on Thanksgiving?

OK. Let’s hear your list of things for the world to give thanks for. …. Uh, HELLO? Anybody there? Do I hear some people talking now?

The world is in a helluva mess, you say? China and Russia are about to overtake us? The Muslims are trying to blow us up? We have a half-breed Chicago rabble rouser as president?

Well, let’s see: Russia threw off Communism 23 years ago. True, the transition to something sort of resembling democracy has been rocky at times, the current leader Vladimir Putin is hardly a reincarnation of George Washington or Franklin Roosevelt, and the transition to free market capitalism has produced a sizeable number of super-rich, super-corrupt moguls. But you can own your own farm in Russia now, the state doesn’t run EVERYTHING any more, and Christianity — and other religions — are free to practice and proselytize again. And health conditions have improved to the point where the average lifespan of Russian men has zoomed to: 64.5 years. Well, it’s better than 59 years, which was the standard a few years ago. A little less vodka and cigarettes consumed, possibly. Thank the Lord for small favors.

Then we have China. Forty years ago, they had a ruler named Mao Tse-tung who was viewed as a sort of godless demi-god, who wore weird collarless jackets, and who was responsible in his lifetime for — oh, the deaths of probably upwards of 100 million people. Plus he ran a huge nation along the lines of the world’s largest and most populous prison. The streets of Chinese cities were traveled mostly by people on foot or riding bicycles, most of them wearing the colorless Mao jackets; along with the occasional big black limousine hauling some high Communist functionary.

But some time in the late 1980s or early ’90s, the Communist party hierarchy sat down one day and said to each other, “Comrades, this ain’t working worth shit!” Ideology was one thing, but economic growth and putting the Chinese people into a better mood (remember Tien An Men Square?) was another. Showing some practicality for a change, the Chinese moguls switched from a state-run, planned economy, to one which is more or less capitalist. Oh, the Communists are still the rulers, all right. But their economy is booming like it never did under the old regime; and the streets are filled with privately-owned motor vehicles and people in contemporary, fashionable clothing and hairstyles. And the Chinese president now is a guy in a conventional business suit, with a conventional haircut. No more Mao jackets.

So I think the world in general should be grateful that, bad as they still are, the Russian and Chinese regimes are light years better than they were just a few decades ago.

The Muslim terrorists? Well, of course they are sub-human savages who should be shunned and condemned by any decent person. They have killed numerous people for not being Muslims, for converting away from Islam, for being Muslim women who committed “adultery” (what about the men who committed it?), or just for the purpose of spreading fear of them among those of us in the Western world. If I had my way, I would round every one of them up and put them all before firing squads.

But, the tragic deaths of their victims aside, maybe the emergence of these scurvy knaves was a good thing, in a way, for the Western world. We’ve realized that the possibility of some foreign power attacking us, with regular troops, an air force, missiles, aircraft carriers, submarines, is not the only thing we need to fear as nations. The European countries, collectively, are rueing the day that they decided to allow hundreds of thousands of dark-skinned, Muslim immigrants to come to their shores. The terrorists, some of whom have emerged from the Muslim masses in Western Europe, are the tip of the iceberg. The danger of losing their Caucasian-populated nations to these high-birth rate, low-education foreigners has led to the emergence of numerous right-wing, nationalist movements in Europe. The Muslims are “the strangers within the gates,” and European apprehension over them is growing steadily.

So, maybe we should all be glad that these terrorist movements arose, in the sense that they have jarred us out of a sense of complacency — especially here in the United States. We’re separated from Europe and Asia by wide oceans — but in this era, that can’t keep out all foreign threats. We’re more aware of that fact now, and more apt to do something about it. Give thanks, Americans; we’re waking up — finally.

India should be thankful that, despite an unbelievably polyglot population, with a whole stableful of different (mutually unintelligible, usually) languages, and almost as many different religions, it has progressed amazingly from independence from Britain in 1947, following 250 years of colonial rule, to being the world’s largest democracy (no lie! I kid you not!) today. Hindus still make up the majority of the Indian population (probably between 75 and 80 percent), which provides a stable foundation for the country, as the Hindus do not tend to have paranoid delusions as the Muslims do. But the Muslims are reproducing like rabbits, so the Hindu share of the population probably will continue to drop — but very slowly. India will have a fairly long window of (relative) peace before the Muslims become numerous enough to start causing real trouble, as they seem to do any time they reach critical mass nowadays.

Then you have the “World Happiness Index” which is worked up by demographers every few years. Norway, Sweden, and Denmark always place in the top five to seven as “happiest” among the close onto 170 nations. Good health; long life; high standards of living; government assistance which provides a reliable “safety net” for the general population; all these things no doubt contribute to those rankings. The Scandinavians have many reasons to be thankful. Skol!

And of course, there’s us — better known as U.S. What are our reasons to be thankful?

Well, for one thing, despite all the problems we’ve had for many years — racial tensions, dropping school scores, a humongous national debt, politicians who seem to be mainly concerned with getting re-elected so they can continue enjoying all the perks of office they’ve voted for themselves — this is still the country that most of the world would give their eye teeth to live in. Has been for over 200 years. They’ve come here as Englishmen, or Irishmen, or Italians, or Greeks, or Norwegians; or, in more recent years, as Mexicans; and within one generation, or maybe two, they’re Americans. Well, the jury is still out on many of the Hispanics, which of course is a big reason for some of the racial tensions nowadays.

This was the country where immigrants could climb as high as the top of the Empire State Building, if they had some brains and were willing to work. It was not uncommon for immigrant families, especially Russian Jewish ones, to go from a tenement on New York’s Lower East Side, to a luxurious mansion north of the city, in just two generations — max. And it still is. Take a look at the statistics on the incomes and net worths of Indian Americans, Chinese, Japanese and Korean Americans, many in their first or second generation here. They tend to be higher than those of the American population as a whole. Yet another thing to be thankful for.

Then we have the African Americans, the ancestors of whom were brought here as slaves. Yes, slavery was bad; everybody knows that. Keep in mind, though, that members of every race have been slaves at some time in world history. Black Africans weren’t the only “victims.” And here’s another thought: If the ancestors of today’s black Americans hadn’t been sold into slavery by their own people, and brought over here on slave ships, then today’s black Americans would be living in Africa. I seriously doubt if many of them would want THAT! So hopefully black people will think about that, and be thankful.

And if you take a look at the world as a whole, circa 2014, you’ll see how we have it immeasurably better, at least in material comforts, than did our ancestors of even 100 years ago. Private ownership of motor vehicles is common in many countries; buses and subways are readily available and affordable for those who don’t have their own transportation; thousands of airliners carrying passengers of every nationality fly to and fro around the world, every day of the year. No more reliance on horses and buggies, and steam engines. Houses where the insulation and modern heating, and air conditioning, keep families comfortable the year around. Those of us “of a certain age” can remember how unpleasant summers often were when we were kids, and there was no A/C.

Modern medical techniques and advances in medicine have made certain conditions which used to be a death sentence — like diabetes — controllable; and others, like cancer, curable in an increasing number of cases. World longevity rates have climbed and climbed. And as people live longer, they have TV, and the Internet, and a whole flock of other entertainment media, to make their days more pleasant in the years after their retirement. Our grandparents would be stunned if they could come back and see the luxury we enjoy, compared to the hard lives many of them had to live.

So, yes, we do indeed have much to give thanks for. Sometimes in this busy world of today, we don’t stop to smell the roses, pet the puppies, chat with an old friend; or murmur, before we go to sleep at night, “Thank you, Lord, for everything.”