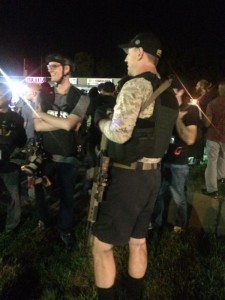 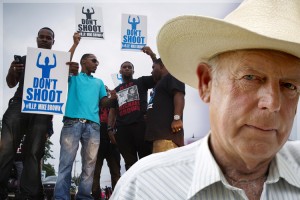 It’s one year since Michael Brown got himself killed (by being extremely stupid) in Ferguson, Missouri, and of course the black agitators in that city used that anniversary as an excuse to mount more riotous “protests” about the incident.

“Black Lives Matter”? Then why the hell do those very same blacks keep ginning up street confrontations which make it likely that police officers will be forced to shoot — again — to defend themselves, thus endangering more of those same “black lives”?

Take Tyrone Harris, for instance. He was out on the streets of Ferguson, in all the turmoil, last Sunday evening. Bearing a stolen gun, he ran from police, then turned on them and began firing shots at a police vehicle that was in pursuit. Dumb; very, VERY dumb. The police exited the vehicle and shot Harris down, leaving him critically wounded. He is now in the hospital, still in critical condition, and facing several criminal charges. Which he should be. You break the law, you face the consequences.

DROVES OF APOLOGISTS were crying the blues for Tyrone early this week, claiming that the police shooting of him was “an execution,” and that plainclothes police should not be assigned to protest/riot situations, because it makes it “harder to tell who is who.” Or in other words, which White people it’s probably safe to attack, and which it’s definitely not. Of course, not counting the clueless young White people who were out on the streets, marching with the “Black Lives Matter” mob. Which just points up the fact that young people tend to be idealistic, and dumb. Or at least, very inexperienced about what the world is really like.

NBC News is reporting that a group of “Oath Keepers,” a White Patriot organization, were seen in Ferguson early this week, armed with heavy weapons and wearing bullet-proof vests, moving around the streets. NBC described them as “a handful,” although given the network’s leftist proclivities, that word can be dismissed as an attempt to minimize the Oath Keepers and make them sound like a tiny, White racist sliver. The Oath Keepers reportedly were confronted by black protesters at one point with questions as to why they were carrying firearms. But they wouldn’t back off. So far, no reports of any armed confrontations between them and the blacks.

Of course, the re-emergence of Ferguson is just part of a pattern of the last year or so. In Dallas, Texas, this past weekend, a black college football player named Christian Taylor, who according to family members had just recently been “saved by Jesus,” broke into a closed car dealership after hours, kicked the windshield out of a car, and caused other damage. When police arrived in response to calls from the public who had seen Taylor committing the burglary, he refused to comply with their orders, ran from them, then confronted them aggressively, and was finally shot and killed by one of the officers. And of course, the excuses already put forth in defense of the recent convert/burglar, would fill enough bushel baskets to take up every inch of the biggest car dealership in Dallas.

Meanwhile, the young officer who killed Taylor has been fired from the police force, before any investigation has been conducted, and may well face criminal charges. The procedure in police departments has been, for many years, that when a police officer kills someone in the line of duty, he is put on administrative leave until an investigation can be conducted. But then, that was before the White establishment in this country became scared to death of these threatening, braying black agitators.

AND OF COURSE, there are a number of similar incidents that have occurred between the Ferguson incident of Aug. 9, 2014, and today. There are individual differences, but two things are always identical: The police officer who shoots is White, the citizen he shoots is black, and the assumption that is always made by the news media, and liberals in general, is, “He was killed because he was black.”

And unarmed. The press is always careful to include that, often in the headline. I’ll bet that if this were in the letter press printing days, many newspapers would have “standing heads” reading “unarmed black man” to be inserted into the headline each time, to save the linotype operator a little time and effort.

Yes, of course; every black man who is sassy and uncooperative when stopped by police, who refuses to get out of his car when ordered, or put his cigarette out, or keep his hands where the cop can see them, resulting in a confrontation and shots fired by the officer, is “unarmed.” And of course the policeman knew for certain when he stopped the black man’s car, or confronted him on the street with cause, that he was “unarmed.” Never mind that a handgun can easily be tucked into the waistband of a pair of pants, and covered with a T-shirt that is left hanging loose. Or, for that matter, a smaller handgun can be hidden in a boot. A dangerous knife — like a switchblade — can be concealed in a pocket. So it’s obvious that, from a little distance, or even up close, an officer can’t be certain that a suspect ISN’T armed. And if so many black men are “unarmed,” why does the ongoing carnage on the streets of our major cities consist, mainly, of black men killing other black men, by shooting them with guns?

That’s like the claims, heard over and over with boring regularity, that police “stop a disproportionate number of black motorists.” Define “disproportionate,” you accusers. Should America’s police be stopping precisely 13.3 percent of black motorists, their proportion of the population? And is this another case where officers know in a flash that a car speeding down the street, or traveling without a license plate, or with a taillight out, is “driven by a black man”? How does that work? Can you tell me for certain, when watching a vehicle speed past, what the race of the driver is? HA! Fat chance. And besides, have you ever noticed how many cars have tinted windows nowadays? Watch one of them go past; often, you can’t even SEE the driver through the window, let alone tell if he is black, white, or red all over.

THE MAINSTREAM PRESS has been of little or no help to law enforcement and the general public in the last year with its reporting on police shootings. Besides the rush to put “unarmed black man” in the first headlines when the story breaks, the press comes a-runnin’ to interview the dead black’s momma (“He be such a good boy! He didn’t do nuffin wrong! He was executed ’cause he was black!”), his friends (“He was always smilin’ and laughin’ ‘n’ stuff; he was nice to everybody. He be turning his life around …”); his father (if any): “He didn’t have no gun! He was asking for the police (excuse me: POHleec) to help him when they shot him!” And so forth. Is this simply reporting on an incident which may, or may not, have been a crime, resulting in the death of a person? Or is it a blatant attempt to sway public opinion against the police?

And by the way: Do the American people really think that no White youth is ever, EVER, shot and wounded or killed by police, under circumstances that are subject to investigation? HA! Well, I guess those who are too dim-witted to put two and two together might think that, as the news media shows no interest whatsoever in reporting on “Police shoot, kill unarmed WHITE youth.” The media, mostly left-leaning as they are, think they have a horse they can ride to victory in this race, and of course it’s a BLACK horse.

So, the parents of these black “victims” of White police, need to do something more useful than marching, chanting and rioting. Black folks, if you don’t want your young son (or daughter, for that matter) put in danger of injury or death in a confrontation with the police, teach them that being lippy and unhelpful with officers, is a fool’s errand. It can get you arrested. It can get you injured. It can get you killed.

Police officers in this day and age are trained in police academies. They are trained to approach the public with courtesy and respect. They are trained to say, “Did you know you have a taillight out? Could I see your driver’s license, please?” If you reply in similar terms, do what they request, you’ll probably be on your way again down the road within a few minutes. That is, if they don’t find out that you have outstanding warrants, illegal drugs in your car, etc. But if you give them “a ration of shit,” as an old policeman friend of mine used to call it, if you are deliberately uncooperative, if you try to flee — well, then their regulations empower them to escalate their conduct so they can retain, or regain, the upper hand. And in addition to the ever-present tasers, they all carry sidearms.

HOW MUCH SENSE, young people, does it make to be smart-alecky, or violent, with someone who has a gun on his hip? That’s right: None.

And here’s a piece of advice from me, for what it’s worth, to our government leaders, and the White majority, in this country: Stop knuckling under to these demands, and marches, and protests. For many years, this country has done many, many things, and spent untold billions of dollars, to try to end, and make up for, the injustices that have their roots in the fact of slavery. We have bent over backward, so to speak, for the last 60 years, with court decisions, Civil Rights laws, affirmative action, fair housing laws, and the like. And every time we have met one demand from the black militants, they have another to present us, before the ink is even dry. And one of their favorite sayings is, “We’ve come a long way — but we got a long way to go!” Their demands are never ending. At some point — soon, I hope — we’ll shout, “Stop! No further!” At least, I HOPE we will — if we haven’t become too spineless and craven to do it.

Many of you won’t like this last paragraph, but I’m going to write it anyway. Whites in the Old South had a saying: “Give a nigger an inch, and he’ll take an ell.” Or maybe a mile. Provoking these police shootings, and then screaming “Foul!” about them, covers many miles.

If you’d like to read the conclusions reached on some of these issues by a distinguished philosopher, Michael Levin, read “Why Race Matters” (New Century Foundation, 2005). This book may help explain to you why Abraham Lincoln, who “freed the slaves,” also wanted to ship the freed slaves to some other location than the U.S., so they could built their own country. For he believed that “black people and White people will never be able to live together peaceably.” Think about it, folks.

← The Donald? The Sun King would like him
Its era was short, but Rockabilly lives on →

1 comment for “‘Unarmed black man’? The phrase is ludicrous”