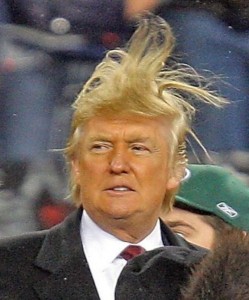 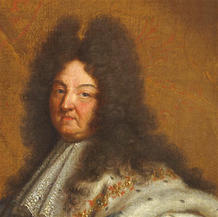 OK: Do you think King Louis XIV could defeat Donald Trump for the Republican nomination for president in the 2016 election campaign?

Too bad the Sun King is otherwise occupied (he’s been dead now for 300 years). He and Trump could be “end men” in the 10-person (or is it 16? or 20?) minstrel show the GOP debates are likely to become. They could be dubbed “The Weird Hair Brothers.” Maybe put on blackface and really “do it up brown,” so to speak. Oh, I suppose what I just wrote is “racist,” isn’t it? Fifty lashes with a wet noodle for that naughty, disgusting Old Corporal!

Of course you can tell the two apart here; Trump is the one with the straight hair “blowin’ in the wind” — and he has an answer for every question. Louis obviously loved the curling irons; looks like he got his ‘do touched up every day. Of course, that could be a wig; but I think it was actually his own hair. The powdered wigs came along later in the 18th Century. I suspect it occurred to someone that if every man had to have one, there was boocoo money to be made manufacturing them. That’s called “free enterprise”: Make them think they’ve gotta have it; then charge them top dollar for it.

The Sun King dazzled everybody in Europe with his brilliance (physical and cerebral) during his 72-year reign, and even with all the wars he engaged France in, he left the country in better shape, financially and culturally, than when he became king at age 5. And he built the Palace of Versailles, which became the model for every royal residence in Europe for many years. That achievement, alone, would make him one of the top monarchs in European history.

The Donald came from a (relatively) wealthy family, but he’s never just rested on his laurels. Like Louis, Trump has always worked very hard (in real estate; he sold it; the Sun King seized it), wheeled and dealed, and piled up unbelievable amounts of money.

LOUIS WOULD LISTEN to all his courtiers’ opinions when they were discussing a matter of state; but then he made the decisions as to what to do, or not do, alone. And woe betide the advisor who voiced disagreement with him after that decision was made! I suspect Trump is the same way. In watching him on TV, in interviews and while making speeches, I’ve noted that he kicks ass (instead of kissing it like so many politicians) and takes names. He doesn’t back down, he doesn’t apologize (well, not so you’d recognize it, anyway), and he’s not one bit afraid of sounding arrogant and self-centered. And if I was worth $10 billion, I wouldn’t be, either. And another thing: I suspect Donald Trump is a “workaholic,” too. Unless you inherit huge amounts of money, which he didn’t, you don’t get where he is today without a lot of drive — a lot of what used to be called “moxie,” too. The ability and the desire to stand up for yourself, to not “take shit” off other people (wish I could have been more like that!), to wheel and deal and burn the midnight oil.

The Donald has been speaking like he’s on the side of the average American when it comes to stopping the flood of illegal aliens currently coming in over the southern border, vowing to overturn what he (and many other Americans) view as the ghastly mistakes — or deliberate destructive tactics — of the current administration of President Barack Obama, and standing up to America’s obvious enemies in the world — especially the Islamic dictatorship in Iran, with which Obama has recently reached an agreement on whether or not Iran will gain nuclear weapons, that many believe has “given away the store” for this country. So even allowing for election-year rhetoric, one could reasonably assume that The Donald is — well, reasonably sincere.

Louis XIV didn’t have to face an electorate, of course. He regarded himself, and was regarded by the overwhelming majority of the French people of the 17th Century, as having been anointed by God to serve as their king, until his last breath. So he always carried himself with dignity — no, let’s call it “majesty,” and would not tolerate contradiction or disobedience from anyone.

But a careful study of Louis’ surviving letters to courtiers, family members, and others; and of what writers and high government officials who knew him personally penned about him, reveals that, beneath Louis’ majestic and stern exterior, he really cared about the common people of France. About their welfare and of how he could conduct his government in such a way as to make life easier and more pleasant for them, consistent with the well-being of the entire country.

SEE THE SIMILARITIES? Donald Trump was born into comfortable circumstances (although not a patch on the enormous wealth he has now), but he comes across as caring about “ordinary Americans.” Louis was born into royalty, and thus as king could have enriched himself and his family and friends enormously, without regard for the peasants. But he truly did take his duties as monarch seriously — and these included seeing to the welfare of “the least of these.”

Does Trump really care about the average American? Hillary Clinton, who could well be his opponent in the November 2016 presidential election, talks constantly about the deck being “stacked” in favor of the “one percent” in this country, and how she’ll do things to change that, if elected. Of course, with a net worth of $85 million (between herself and her husband, former president Bill Clinton), she qualifies as a “one percenter” herself. But pay no attention to that multi-millionairess behind the curtain.

On the other hand, The Donald doesn’t seem to make a fetish out of weeping crocodile tears over the “plight of the poor.” He simply tells audiences that the American people are being served horribly by the existing president — and also the Congress. And whether you like him, or hate him, you’d have to agree that with Donald Trump as president, things would be markedly different from the way they are now.

Trump kind of harks back to the American industrialists, bankers, and other super-rich of the 19th Century. They didn’t apologize for their wealth (even though many of them came by a lot of it in underhanded ways, like paying starvation wages to their work forces, or cutting “sharp” business deals that left the other party holding the short end of the stick). No, they were filthy rich, and they flaunted it.

NOW, THE DONALD doesn’t exactly do that VISIBLY, like his predecessors did, with tailor-made, gaudy clothes, rings on every finger, and the like. But he’s not a bit shy about telling you how wealthy he is, and that he won’t be beholden to wealthy campaign donors, as those other Republican — and Democrat — presidential candidates will be. He’s financing his own campaign, thank you, and he won’t even miss the money. When you’re a presidential candidate, and if you win, numerous wealthy donors (individuals and/or organizations, such as corporations or labor unions) can “call in favors” from you, then you’re starting out with one hand tied behind your back. If you’ve financed your own campaign, as Trump obviously can and will do, then you owe fealty only to the voters who elected you — and the Constitution, obviously. That’s a much better beginning to a presidency.

So some of you say we shouldn’t elect a bombastic real estate mogul with unlimited wealth as president? Well, why not? We’ve had presidents of every stripe, every level of experience, every political leaning. We’ve had Southern planters who owned slaves, crusty New Englanders, Indian fighters, lawyers, at least one newspaper editor, men who inherited their wealth, men who worked their way up from poverty — and, currently, a mixed-race law professor and “community organizer” of murky origins who seems to have a distaste for the United States in general, and White people in particular.

Why are some Americans horrified at the idea of The Donald moving into the Oval Office? Would we rather have the “second coming of Bill Clinton,” a la electing his wife Hillary, with the First Philanderer as the power behind the throne? Or how about Jeb Bush, continuing as the third in his family to become president in the last 28 years?

Louis XIV was the most outstanding member of a royal dynasty. We fought the British during the American Revolution to throw off the yoke of monarchy. We don’t need to start another — or two — dynasties, in the 21st Century. Donald Trump, a very smart, enterprising and successful businessman with no real political experience, would be a new start, a change of direction. I personally believe that he is what America needs as its next president.

And if the Sun King were alive and had studied our situation, I think he would agree.

Here’s a postscript about the 10-person Republican presidential candidate debate last night (Aug. 6): The Donald probably didn’t hurt his chances of gaining the nomination much with his statements in the debate, but I doubt if he helped them much, either. He managed to give some ammunition to the “Republicans waging a ‘War Against Women’ ” mantra that the Democrats bray at every opportunity; and he refused to rule out a run for president as an independent if the Republicans don’t “treat him right” during the primary campaign. He sounded petulant and childish saying that, and he has to be aware of the general opinion that such an action by Trump would practically hand the general election to Hillary Clinton — or, possibly, some other Democrat who might defeat her for the Dems’ nomination. Not anything a Republican wants to think about.