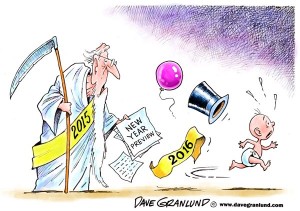 This old year, 2015, has been a real doozy, hasn’t it? Most of us will feel a relief when it ends at midnight tonight.

Well, at least, I will. But I suspect many, many would agree with me. The Islamic terrorism (there, President Obama, I said it — even though YOU won’t); the apparent, gradual dissolving of the America that we all knew and loved, the America we grew up in — not perfect, certainly, but still the Shining City on a Hill, the greatest country mankind has ever created. The arbitrary overturning of a number of state referenda that had all declared, by vote of the citizens, that marriage is between one man and one woman. All overturned by a bunch of unelected federal judges who practically broke a leg jumping onto the homosexual bandwagon.

A federal debt which is rapidly approaching $19 trillion dollars. One that neither Obama, nor his Democratic party, nor the Republicans who now control Congress, seem much concerned about. Do they think it will just magically disappear one of these days, of its own accord, with no one having to do a thing about it?

Illegal immigration that Obama pretends to be “concerned” about, along with his party, but really isn’t. They see every brown face that comes across the Mexican border as yet another likely Democrat vote. Winning the next election — that’s all they care about. And meanwhile, the Republicans who have repeatedly and vehemently voiced their opposition to said illegal immigration, have done practically nothing to try to stop it, despite having majorities in both the House and Senate. Obama has defied their feeble attempts repeatedly, on immigration and a number of other issues, simply issuing executive orders that have done an “end run” around federal law. And the congressional leaders have protested, and talked a good game of bringing him under control — and then done nothing to follow it up. I suspect they’re afraid of being called “racist” if they did anything. If Obama were White he would have been impeached and removed from office long ago.

OF COURSE, THE things I’ll be glad to see gone along with the old year are not all political. The Civil War ended 150 years ago — whoopee! Now let’s move on with our lives. Let’s stop worrying so much about the Civil War, all of whose veterans have been dead for nearly 60 years, and start paying more attention to the thousands of living U.S. military veterans who are either homeless, or disabled by their service but having the devil’s own time trying to get the benefits to which they are entitled, or being forced to deal with miles-long waiting lists to see a VA doctor. There is no excuse for the Veterans Administration to be dropping the ball so consistently as it appears to be doing, if one believes all the news items that have come out in 2015. I know that can be difficult at times with the political biases of our media — going both ways, I hasten to add. But where there’s as much smoke as swirled around the VA in the past year, there has to be some fire.

The U.S. economy has supposedly been improving this year, after its extensive nose-dive after the stock market crash of 2007 — although it’s hard sometimes to see where. When gas prices at the pump dropped to the lowest point since 2007 recently, merchants expected there to be a big splurge of spending by consumers with the money saved in filling the gas tank. But it didn’t happen. People were saving the extra money instead. Now, there’s nothing wrong with putting something away for a rainy day; I’ve been doing it all my adult life. But Americans in general aren’t famous for their high savings rates. Not like the Japanese, for instance. Yet now, they are doing the squirrel and his nuts routine (OK, go ahead and laugh; you know what I meant). The American people are nervous … and worried … and angry. They don’t know what’s going to happen next. When you’re in a situation like that, it certainly never hurts to have a little more put by.

So, instead of making New Year’s resolutions, why don’t you and I list the things we’d LIKE to see come true in 2016? You all are welcome to post comments at the end of this essay; you haven’t been doing much of that lately.

OK: I’d like to see the Republicans stop their inter-party squabbling and settle on a presidential nominee for the new year. I don’t really care which one, as long as he/she can defeat Hillary Clinton. We don’t need a Clinton third term, OR an extension of Barack Obama’s disastrous reign. And no, I’m not a Republican. I USED to be a Democrat.

Why can’t the U.S. be more sensible about drinking ages? I’d like to see the individual states free to set their own laws about when a young person can legally buy and consume alcohol. Oh, they supposedly are; but if a state strays “off the reservation,” the feds will threaten to cut off the government spigot to that state. But “states rights” is the way it used to be. When I was in New York State taking my second eight weeks of Army training, at age 18 you could buy and drink anything you wanted in that state. When I was stationed in Kansas for two years, anyone 18 and over could legally buy and drink 3.2 beer. It wasn’t like New York, but when you’re 18 or 19, it was better than nothing.

BUT THEN IN 1980 Candy Lightner formed the Mothers Against Drunk Driving, because her daughter had been killed by one. Over a period of several years, they managed to intimidate every state into raising the legal drinking age to 21. I looked up how many countries in the world won’t allow alcohol purchase/consumption until age 21. There are only 12. Here are the countries: Cote d’Ivoire, Equatorial Guinea, Iraq, Kiribati, Micronesia, Mongolia, Nauru, Oman, Palau, Samoa, Sri Lanka, and the U.S. Puts us in great company, doesn’t it? There are 21 countries that allow purchasing and drinking at ages 16 or 17; and 115 nations where you can drink legally at ages 18 or 19. Those two categories include all the European and South American countries.

What kind of sense does it make to say to American young people, “You can join the military without parental consent at age 18 (and possibly die for your country); you can drive at 16; you can vote at 18; but we’d better not catch you buying or drinking ONE DROP of alcohol before your 21st birthday!”

That’s right; it makes NO sense. People can learn to drink sensibly and responsibly in their teens, as they do in most of the world, IF the alcohol is not made “forbidden fruit” that they dare not touch until they’re almost out of college. IF they’re not treated like little kids who can’t be trusted around the cookie jar. Then, it becomes a challenge, an exciting one, to see how often you can break the law without getting caught. And to guzzle the booze once you’ve gotten it, to get a quick “buzz” before someone finds out.

Along that same line, I’d like to see the states demand back some of the powers to govern themselves that the federal government has taken away over the years. It’s no good saying, “Oh, the feds won’t let us do that, and there’s nothing we can do about it!” Bullsugar! There’s ALWAYS something that can be done about it, if the people affected just have enough guts to stand up and say, “No, Uncle Sam, you’re NOT going to browbeat and intimidate us into following the Washington line on every little thing!”

This “There’s nothing we can do about it” attitude that seems so prevalent nowadays among more conservative Americans, is so self-defeating, and I’d certainly like to see us get over it. That’s not how the 13 colonies turned into the United States of America. They stood up to George III and the redcoats; they armed themselves and formed a Continental Army, and state militias. It took eight years, but they finally won that independence they had declared in 1776.

WHICH BRINGS ME to another topic: Private ownership of firearms. Hey, President Obama, if I were a gunshop owner, I’d be praying every night for you to make another public statement about how we need “stricter gun laws” for America. Because every time you do that, people flock to gun-sale outlets by the hundreds of thousands, to buy MORE weapons!

There are more than 300 million privately-owned guns of various types in this country now. Under those circumstances, if you think “gun confiscation” is something that can be accomplished by the federal government or anyone else, you’re nuts. It ain’t gonna happen, Mr. Prez. Number One, there is a Second Amendment. Number Two, any move of that type on your part would be resisted with force, and might even start a second American Revolution. You may think you’re fooling people with this “stricter gun controls” hooey, but we all know that what you’d REALLY like to do, is seize ALL our privately-owned weapons. And any nation where the only legal firearms are owned by the government and the police, is either a dictatorship, or just one step away from it. So I’d like to see all this nonsense about blaming guns for the things that bad people do with them, become a thing of the past.

WELL, FOLKS, THERE it is — a summary of my wishes for 2016. It couldn’t possibly be any worse than 2015 (I hope!) Feel free to post YOUR wishes for the new year, below this story. Or disagree with mine. Any comments will be welcomed.

As for me, I’m going to clean my Glock 9 mm., grab a few bites of supper, and head downtown for a few celebratory New Year’s drinks. And if anyone gives me a hard time, I guarantee you there IS something I can do about it!

← A Christmas angel in the house
U.S. must return to ‘See the good in the world’ →