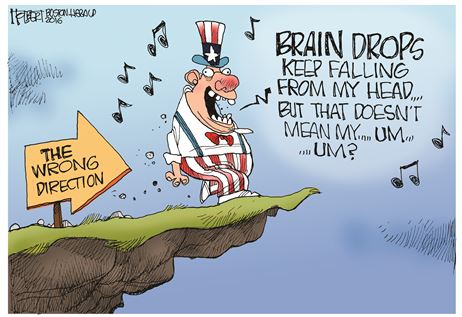 If you follow social media, or keep up with politics, as I do, you’re probably angry, frustrated, depressed, and wishing something — ANYTHING — would happen to break this cycle we seem to be stuck in.

We’ve had our happy, prosperous times here in America. The 1920s, for example, when we thought that the Charleston, hot jazz, speakeasies, and a sky-rocketing stock market show, would go on forever. Then fast forward to the 1950s, when, with World War II and the Korean Conflict over, and someone in the White House (Dwight Eisenhower) who was not a professional politician, we began singing “Happy Days Are Here Again,” as people had during the Depression when they saw (they thought) the hard times starting to recede under the leadership of Franklin D. Roosevelt.

But, of course, the good times don’t last forever; they come and go. They came during the administration of Ronald Reagan, and lasted long enough to help George H.W. Bush get elected to a term of his own. But then the mild recession of 1990-91 kicked in, and that was enough to help Bill Clinton take the White House back for the Democrats after 12 years of Republican administration. And Clinton proved a capable president (despite his serial philandering) and we prospered during his administration.

Things began to slip a little — then a little more — after George W. Bush took office. And then we elected “our first black president” (one big turn and a bow, America. Aren’t you proud of yourselves? HA!) and it’s all been downhill since then. Now, in yet another election year, we’re looking at a world in turmoil again. Despite Barack Obama’s self-satisfied State of the Union Address of Tuesday night, this country — and this world — are in a godawful mess. And a lot of that mess — but not all — is due to actions, or lack of same, by Barack Obama.

BUT THIS IS not basically a political screed. I’m talking also of how, in this age of the Internet, hard times have produced hard feelings. We are angry and frustrated, and in this age of anonymous postings on the page of a website, we love to lash out, to lay someone else to waste, to tell them they are idiots, or “racists,” or ignorant believers in “an imaginary man in the sky,” and so forth.

This is a symptom of a terrible epidemic of cynical pessimism that seems to have swept over this country in the age of the Internet. Look at Facebook, for instance (I know most of you do each day, as do I). Look how many posts there are, often with video, stating something like “American school children forced to recite Koran,” or “Obama reveals plan to force Americans to surrender guns,” or, “Black thugs beat, rob elderly White man; mainstream media silent.” You see what I’m saying? The average American is going to have his guns confiscated; or his children are going to be forced to recite from the book that Muslim terrorists consider “holy”; or he is going to be beaten up on the street by a Negro mob, and they’ll get away scot-free, and nobody cares. It’s as if we were saying, “Boys, they’ve got us whipped. We might just as well lie down and let them walk all over us.”

The Latter-day Saints have a saying: “See the good in the world.” Of course, that would be one of the sayings that would attract the most ridicule and sarcasm in the Mormon-hating Salt Lake Tribune, which ranks right up there with our own Old Madison website, in my opinion, as two of the sites that tolerate — no, ENCOURAGE — the dumping of verbal slime over anyone who is prominent in the community, or the “wrong” church, or the “wrong” political party.

Is the era of saying, “I disagree with your political views, but I respect you personally;” or, “I may disagree with your views, but I will defend to the death your right to say them”, which is a quote directly from Thomas Jefferson — is that era gone? Are we no longer able to see the good in this life? Has the seven years of constant conflict between President Obama, and the Congress controlled at least partially by the Republicans since 2010, plus the opportunity to trash others on websites, and do it anonymously, poisoned our souls? What has happened to America? Who thinks that it’s good for our Shining City On A Hill to have the various races at each other’s throats? To be encouraging people to envy and resent those more fortunate, or harder working, or smarter than they? To poo-poo such notions as trying to act as ladies and gentlemen (men sitting eating in restaurants with their good-ole-boy caps still perched on their heads is one, admittedly minor, example that comes to my mind). Or walking right in front of someone else in public without even bothering to acknowledge them or say “Excuse me”?

YOU SEE WHAT I’m saying? These things CAN be signs that a society is crumbling, slowly collapsing, losing the will to take the initiative, to stand up for their country, to help themselves. Is that what’s happening in the America that was the bastion of liberty to the world, that more people have voluntarily immigrated to than any other on earth?

Rodney King, who was beaten by Los Angeles police back in the early ’90s after they had to chase him for six miles, once said, while still in custody, “Can’t we all just get along?” Much as I hate to quote the likes of Rodney King as an authority on anything, I think he had a point there. Is the spirit that held us together for well over 200 years, that has produced authors, philosophers, inventors, entertainers, statesmen, by the hundreds — is that spirit dying? I devoutly hope not.

We became what we once were by seeing “the good in the world.” Is there a possibility that we could start to get back to that optimistic time? Can’t we all just get along?