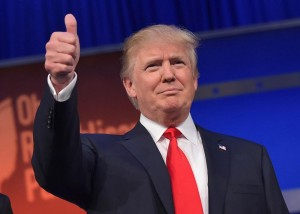 OK, national GOP leaders: Everyone got their pistol loaded and ready? Good! Now, everybody aim their weapons down toward the floor. One, two, three, FIRE!

That exercise is called, “Shooting yourself in the foot.” And that’s just what the Republicans’ Washington leadership seems determined to do to itself, with this idiotic, “We’ve got to stop Trump at all costs!” campaign they’ve got going on, early in this year’s presidential election campaign.

We’ve heard ten thousand times by now that “more than half of all Republicans” don’t like Donald Trump, and won’t vote for him. Or “two thirds”. Or, “at least 40 percent.” Or something. Guess if 100 percent of Republicans voted for The Donald, the GOP sachems would say, “But nobody ELSE is going to vote for him!”

They hate Donald Trump. Period. They hate him so much that they are desperately pushing Ted Cruz’s campaign — and John Kasich’s, in Ohio — to try to force Trump into a “brokered convention.” That’s Latin for, “We don’t give a shit who you voters want as the nominee; we’re going to dump Trump, by hook or by crook, by fair means or foul. We don’t want him as the nominee, because we won’t be able to control him. We might have to give up our perks and privileges — our power we’ve accumulated in our many years in the Congress, due to no term limits. WE run things in this party, and don’t you peons forget it! We don’t care if the Republicans lose the presidency to Hillary Clinton with some other nominee; at least then we’ll still be in control of the party!”

It wasn’t surprising that the left wing in Chicago managed to force the cancellation of Trump’s scheduled rally on Friday, March 11. The left has had plenty of experience, over the years, with deliberately disrupting and wrecking any speeches or rallies they don’t agree with. To them, “freedom of speech,” applies only TO them. Anything a conservative says is automatically “racist,” “sexist,” “homophobic,” “Islamophobic,” (fill in the blanks), and is fair game for their physical attacks. And all too often, with the “war on the police” that the Obama administration and its allies in the mainstream media have been waging ever since Ferguson in 2014, the police on the scene are hesitant to deal with these trouble-making leftists the way they SHOULD be dealt with.

But Trump’s rivals for the Republican nominee for president, Ted Cruz, Marco Rubio and John Kasich, practically broke a leg rushing to the press to proclaim the mob activity at Trump’s rally — all Trump’s fault. He must “cool the rhetoric,” they said. He’s been “stoking up people’s anger,” they cautioned.

Excuse me, but you three GOP bigwigs must be as stupid as the ones who run your p

arty in Washington seem to be. Donald Trump isn’t addressing people who are calm, collected, and all hunkey dorey with everything that’s gone on for the last seven-plus years. He’s talking to people with jobs, who are supporting their families, who have become the favored targets of the media and the liberals (excuse me — that was redundant) who ridicule them as “rednecks,” “racists,” “Islamophobes,” and so forth. They haven’t liked that ridicule and condescension — in fact, it’s made them “angry” (have they passed a law yet making it illegal for White males to get “angry”?) But they’ve continued on with their lives, trying to just deal with it and get through it. The lukewarm condition of our economy has them upset, too (who wouldn’t be?) Millions of jobs have left the country to low-wage Mexico, China, and other Third World areas. Millions of Mexicans, meanwhile, have walked unimpeded across our southern border, becoming a burden on the majority population in this country, partly BECAUSE of so many of those jobs leaving the country.

These White Americans often feel that they, whose ancestors built this country, have been relegated to the “back of the bus” in 21st Century America. And the media, and the Democrats, and the GOP powers that be, say that TRUMP is to blame for their anger???!!! Tell me another story, Mommy; I’m not sleepy yet.

Apparently, according to a number of sources, massive anti-Trump demonstrations at his recent rallies have been organized by the leftist website MoveOn.org, and possibly financed by the Clinton and Bernie Sanders campaigns. Although, who knows, maybe these thousands of people in Chicago, for instance, all just happened along near the Trump rally at the same time, and all just happened to be anti-Trump fanatics, and became so self-righteously outraged at his “racist, anti-immigrant” rhetoric that they were unable to stop themselves from trying to “crash the party” and “smash Trump.” But don’t bet the rent on it.

These protests, both in Chicago Saturday, and in Dayton, Ohio, and in another location in Illinois Sunday, and in St. Louis, will probably accomplish exactly the opposite of what the leftists wanted. That is, while they expected the American people to conclude that Trump is “stirring up anger that leads to violence,” I think that the bulk of the American people will see a politician, unorthodox as he is, and loud and obnoxious as he can be, being treated unfairly, having his First Amendment rights trampled on, by what they view as a gang of thugs, of all colors.

Other Republicans keep pointing out the fact that national polls show Cruz, Rubio and Kasich all defeating Hillary Clinton in a general election — Kasich by close to 10 points — while she supposedly would defeat Trump. But I’m suspicious of that trend. Cruz, Rubio and Kasich all are considered “respectable” candidates by the GOP powers that be. Trump is viewed by them, and large segments of the media, as reprehensible, the skunk at the picnic. Many people are hesitant to voice support, even to an anonymous pollster on the phone, for someone like The Donald with the “Mark of Cain” on him. It’s like saying “nigger” and not being embarrassed by it; most Americans nowadays are very cautious about doing that.

Hence, I think that many people, when they enter the voting booth and close the curtain, with no one else to see what they’re doing, will vote for Trump. Although they might deny it later if challenged.

Will Trump win the Republican nomination? I think so, despite the efforts of the Republican hierarchy to euchre him out of it. Will he defeat Hillary? That remains to be seen. Of course, if she actually is indicted over the e-mail controversy, then all bets are off. I’d guess she’d have to drop out of the race, and that Vice President Joe Biden (probably) would be drafted to take her place.

But I can tell you one thing: Like millions of other Americans, I’m furious at what’s going on in this country. I’m sick of the “respectable” politicians, of both parties, and from both of the ends of the political spectrum. They’ve lied to us, pandered to us, promised us the moon, and not even given us green cheese. To hell with them.

I’m not a wild-eyed follower of Donald Trump, either. He hasn’t been specific enough with what he’s planning to do as president; he’s too prone to shoot off his mouth in speeches without considering how his words are going to sound to the public. And he doesn’t have any real experience with traditional politics.

But I don’t care. He’s shrewd, he’s had years of experience at wheeling and dealing (which is necessary in politics, despite what Ted Cruz thinks), and he’ll hit the ground running if and when he’s elected. Whoever wins the Republican nomination will get my vote (I’m a former Democrat who abandoned that party when Obama got back in for a second term). But I’ll be happier, I’ll be a lot more confident of America’s future, if I can cast that vote for Donald Trump.

I see it this way: If as many people are bitterly opposed to you as the powers that be are to Trump, then you must have something good going for you.