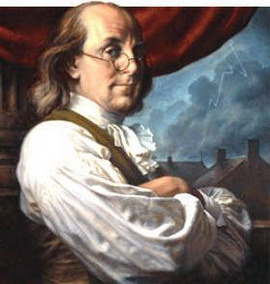 Benjamin Franklin, one of our most well-beloved Founding Fathers, never served as president of the United States. He was born too early (1706) so that by the time the first president (George Washington) was elected, Franklin was a frail 83 years old. He died the next year. Of course, it’s very doubtful that anyone but Washington would have been elected our first president — and rightfully so.

And, they often say that everything happens for a reason. For if Ben Franklin had been born later, and could have served as president, then Thomas Jefferson wouldn’t be remembered as our smartest president ever. Maybe second smartest.

Benjamin Franklin was a true Renaissance Man, many years after the Renaissance was over. An author (“Poor Richard’s Almanack”), a printer, an inventor, the discoverer of electricity (through his experiments with flying a kite during a thunderstorm — he was lucky he didn’t get electrocuted.)

He was our first ambassador to France, being a prime mover in King Louis XVI’s decision in 1778 to throw his nation’s power behind the 13 colonies in their struggle for independence from Great Britain. Of course that power was a decisive factor in our finally winning that independence in 1783.

And to show that Franklin was also a very “human” man, he is said to have also been quite the favorite of the ladies at the French court at Versailles, all 70-odd years of him. Can you say, “rock star, 18th Century version”?

Franklin was not only brilliant, but also, WISE. No, the two are not necessarily the same. I’ve known some very intelligent people who were definitely NOT wise.

The thing that most people who know anything about Benjamin Franklin nowadays remember, is his publication “Poor Richard’s Almanack.” I say, “most people” who know anything about Franklin, because I’m told that American history isn’t taught much in America’s public schools nowadays. Which is a damn shame; many young Americans today are growing up without any real knowledge of how their great country was founded.

“Poor Richard” wrote a lot of epigrams in his Almanack. Some were humorous; a few wer 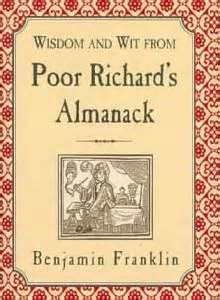 e touching; and most of them showed that he was not only brilliant, but also had uncommon common sense.

You see, that phrase “common sense” originally had a different meaning than most people assume today. It meant, roughly, “knowledge about the world and how it works, shared with the majority of the human race.” Or the majority of the people in your town, township, county, whatever. It meant, “shared knowledge, which is obvious to anyone not a fatheaded liberal who thinks he’s smarter than the average bear and sees the world differently than 99 percent of the population.”

There are ones which could be called, “Listen to me, dumbass, and you’ll be a smarter man”:

“Three may keep a secret, if two of them are dead.”

“Tell me and I forget; teach me and I MAY remember; involve me, and I learn.”

There are the humorous ones (Franklin was known as being witty, as well as wise):

“Hide not your talents — they for use were made;

What’s a sundial in the shade?”

“Nothing but money, is sweeter than honey.”

“There are three faithful friends: An old wife, an old dog, and ready money.”

“After three days, men grow weary of a wench, a guest, and weather rainy.”

Then there are the ones which could be applied to situations existing today:

“Love thy neighbor, but don’t pull down your hedge.” Can you say, “Rio Grande?” “Illegal immigrants”? “We’ll build a wall, and Mexico will pay for it”?

“It is the first responsibility of every citizen to question authority.” Millions of Americans would agree with that one, in this election year 2016. Trust in “authority,” often meaning the federal government but extending also to the state and local level, has not been lower since — well, I’m no expert on American history, but I’d say, since 1932, when the Great Depression was raging, millions were suffering, and the voters perceived President Herbert Hoover as not doing nearly enough to relieve the country’s misery. Right now we have an arrogant, swelled-headed president who thinks he’s always the smartest guy in the room; and a Congress controlled by the opposite party which does not have the backbone to stand up to him and remind him that he is a president, and not an “emperor.”

“Those who surrender freedom for security will not have, nor do they deserve, either one.” Franklin believed in the Second Amendment, and this one, to me, obviously addresses Americans’ right to keep and bear arms. The people who think we would all be oh, so much safer if all privately-owned firearms were confiscated by the federal government, should read that last epigram, and ponder on it.

“The Constitution only guarantees the American people the right to pursue happiness. You have to catch it yourself.” In other words, there is no “right to receive happiness.” Just because you’re entered in the 100-yard dash, you’re not guaranteed that you’ll win it.

And here is a rather long epigram, with parts omitted as not essential to its message, which would probably bring cries of “Racist!” or “Privileged, uncaring White man!” if a philosopher or politician wrote it today:

“I am for doing good to the poor, but … I think the best way of doing good to the poor, is not making them easy in poverty, but leading or driving them out of it. I observed … that the more public provisions were made for the poor, the less they provided for themselves, and of course became poorer. And, on the contrary, the less was done for them, the more they did for themselves, and became richer.”

Such heresy! The thought that if the poor work hard, and practice wiser use of their money, they can raise themselves out of poverty, would likely make your average bleeding-heart White liberal, choke on his caviar. “We’ve got to help these poor people!” has become 21st Century English for, “Damn the $19 trillion national deficit! Full speed ahead with federal welfare programs as far as the eye can see!”

But Benjamin Franklin was, all said and done, an optimist. Another of his epigrams, heard much less often than some, says, “Do not anticipate trouble, or worry about what may never happen. Keep in the sunlight.”

Franklin’s optimism was always laced with a little reality, though. When he and the other delegates to the Constitutional Convention of 1787 were leaving Independence Hall, with the new U.S. Constitution completed, a member of the general public who was waiting and watching, with others, called out to him: “Ambassador Franklin, what kind of government have you gentlemen set up for us?”

And Franklin answered, without breaking his step, “A republic — if you can keep it.”

Franklin knew the path of republics; he had seen it throughout history.

Nearly 230 years have passed since then. Our country, the greatest in world history, has changed much. Many of us think that a lot of the most recent changes are not good ones.

What do you think, fellow Americans? Can we keep it?

4 comments for “‘Poor Richard’ was a millionaire in wisdom”