The riots in the streets that were plaguing Europe just a few months ago have now come to America, just as many predicted they would.

No, I won’t compare the monstrous temper tantrum union members are having over Gov. Scott Walker’s plan to force them to pay “their fair share” toward their pension and medical benefits packages, plus to give up some of their collective bargaining “rights,” to the recent riots in Cairo, Egypt, as some liberal commentators have tried to do. These aren’t starving people without jobs, “speaking truth to power” to seek freedom after a long dark night of dictatorship. These are spoiled government employees whose exhorbitant union contract packages over the years have helped to drive the United States to near-bankruptcy. Multiply the 300,000 public employee union members in Wisconsin many times, and you have the situation facing the entire country. We’re broke, folks. The well’s dry. The golden goose has been cooked. What do the unions not understand about, “The money’s not there any more”? Wisconsin’s not the only state now staring painful choices in the face. Indiana’s teachers rallied against Gov. Mitch Daniels’ cutback plans. The same situation is likely to erupt any day in Ohio. Connecticut’s governor is warning his people that something must be done, something difficult and unpleasant, and soon. And of course,California is, literally, broke. Its new governor, presumably now wise enough not to be gazing at “moonbeams,” has already told the state’s residents of hard choices coming.

Every state is facing ruinously expensive pension obligations for public servants, from policemen and firefighters, to office workers, to postal employees, to teachers — and the list goes on. In many areas, covering the cost of these pensions — that is, coming up with the checks for the retired public servants every month, has become a matter of borrowing from Chinese Peter to pay retired Paul.

Are unionized public employee demands the sole cause of our financial crisis? No, of course not. You can count in Social Security and Medicare, for which bankruptcy is looming; also Medicaid; also the multitude of federal programs designated as assistance to “the needy” which have all been so gamed by millions of people that they are, in effect, being paid by the taxpayers to be poor.

And speaking of Social Security, one could say that the “budget cutting” has already started right there, with those of us now receiving it not having received any cost-of-living increase for either 2010 or this year. Wonder how much the taxpayers saved that way? And why does no one point that out in these discussions of who should be cut, how much and where?

But the government union demands, and the pensions that are nearly always a part of them, are a major culprit in our financial crisis.

Now, in case any readers who don’t know me personally picture me as a radical-right, Republican union-hater, let me inform you that I’ve been a registered Democrat all my voting life. My dad was an absolutely rock-ribbed Democrat who once told me he’d voted for “damn few Republicans” in his life and that Ronald Reagan made him regret even that handful of ballots he cast for the GOP. 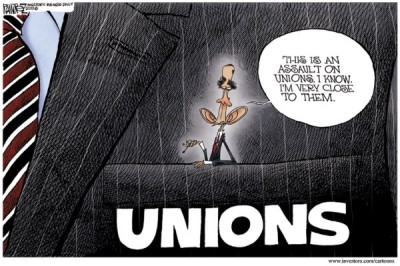 When I was working at the Madison Courier for nearly 40 years, I attempted several times to interest other newsroom people in approaching some newsmen’s guild, with intentions of unionizing our newsroom. I did this because of the management’s tightwad pay scales and overbearing, lord-of-the-manor attitude toward its employees. But I was never able to interest any other newsroom employees in my idea.

So I bear no animus toward unions in general. They came into existence back in the 19th Century because they were sorely needed by working people.  But the government employees of today aren’t coal miners risking their lives every day, or factory workers with long hours, few safeguards around dangerous machinery, and meager wages.

Besides, when you come down to the bottom line, the money is just not there. Walker has warned that if the Wisconsin legislature doesn’t pass the bill the union members are so opposed to, 10,000 to 12,000 government employees at all levels in Wisconsin will have to be laid off. The union members and their supporters, by their “Don’t you dare touch my perks!” attitude, may cause thousands of their fellow working people to become jobless.

Is that working-class solidarity? I hardly think so.

The U.S. has survived many major crises: The Civil War, Reconstruction, the Great Depression, World War II. We can survive this one, too. But that’ll only happen if we all stop yelling, “Me! Me! Me!” as the Wisconsin protesters have been doing, and start instead saying, “We! We! We!” We can do it. But we’ll all have to conquer our selfishness first.

2 comments for “Selfishness of the Wisconsin laborites — and others”