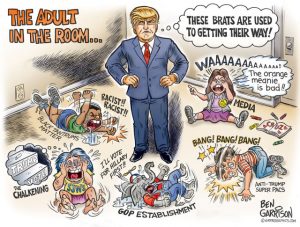 Many, many years from now, when our grandchildren have grandchildren of their own and people my age have been pushing up daisies for a long time, Americans will still be talking about this insane, unlike any before or since, presidential election we’ve been stuck with this year.

The Democrat is old (69), in questionable health, and has a terrible track record of financial shenanigans, blatant public lies about her conduct as first lady, senator, and secretary of state; and a tendency to stick to the script at her public rallies, and to avoid allowing the press direct access to her whenever possible.

The Republican is slightly older (70), prone to public, ill-considered outbursts at his rallies which the national media, which is almost totally on the side of the Democrat, pounces on with glee and harps on for days; has made himself billions of dollars as a building magnate, with all the shady dealings that suggests; and appears to have an ego as big as all outdoors.

Hillary Clinton and Donald Trump. A little over a year ago, few suspected that The Donald would throw his hat into the ring for the 2016 race. For the past eight years, it had been assumed that The Hillary would be the Democrat nominee this year, and would waltz right into the White House, as she was “entitled” to be the first woman president, and it was “her turn” as Barack Obama had managed to “out-minority” her in the 2008 race. Women, you see, are considered “honorary oppressed minorities” in the U.S., even thought they make up more than half the population because (of course!) everybody in this country has been “oppressed” by we nasty, racist, misogynist White males. Many younger people nowadays can’t tell you who the first president was, but they know all about slavery, and “women’s rights.”

There are a number of reasons that Trump should hold at least a modest lead in the polls right now. For one thing, only once since 1952 has the same party won the presidency three terms in a row — George H.W. Bush in 1988, after eight years of Ronald Reagan. It’s simply human nature to say, “OK, the Democrats (Republicans) have had the White House for eight years; it’s time to change over for a while.” Only twice in our history — from 1860 to 1912, during which there was only one Democratic president (Grover Cleveland); and from 1932 to 1952, when the Great Depression and World War II helped keep Franklin D. Roosevelt, then Harry S Truman, in office for 20 straight years.

For another, Barack Obama has been a controversial president (to say the least) for the past eight years, with our recovery from the serious recession of 2008 being a very puny one. Obama has given clear indications of disliking the police in general, of not having many warm feelings toward White Americans (never mind that his own mother was White), and of being somewhat less than “work brittle,” to use an old saying that means, in bald terms, “He’s lazy.” He has probably played more rounds of golf in the last eight years than all the other presidents, combi 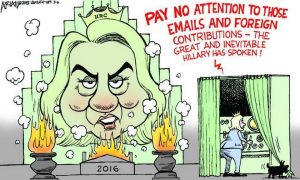 So why does Hillary Clinton, with her questionable health, her lies, hers and Bill Clinton’s lustful (and very successful) pursuit of the mighty dollar, her carelessness about national security matters — read, especially, “Benghazi” — why does she lead Trump, allegedly, in all the polls?

Well, if you want my opinion, it’s because the polls are being manipulated by the pollsters, to assure that Hillary will come out above Donald. There are numerous ways that can be done, such as poll a disproportionately high number of Democrats, word the questions in such a way as they make Clinton look sensible, experienced, “safer,” etc., in comparison to Trump. The same questions can be manipulated to make him look “dangerous,” “inexperienced,” “hot-headed,” and so forth. Polling a smaller number than usual in a nationwide sampling makes it easier to put the pollster’s “thumb on the scale,” too.

And of course, the national news media hates and detests Donald Trump, and so ignores policy statements that he makes, such as in the speech he made in Youngstown, Ohio today. Instead, they love to seize on anything he might have said off-the-cuff, or in an aside, which they can depict as “absurd,” “self-defeating,” “racist,” and so forth. Even Fox News, supposedly so right-leaning, has been doing that ever since the Republican convention.

And why are the media so determined to make Trump lose, if they possibly can? I mean, aside from the fact that he’s a Republican? Because he says what he thinks, and doesn’t give a damn about the consequences. Because he’s thumbed his nose at the political insiders in Washington, at the news media, at every part of “the Establishment,” ever since he announced his candidacy. In effect, he’s saying, “Elect me, and I’ll really shake up this country! I’ll make some REAL changes! I’ll stop those Mexicans from coming in illegally, build that wall, make the NATO countries pay their fair share, battle ISIS and destroy them …”

And why are the media so determined to make Trump lose, if they possibly can? I mean, aside from the fact that he’s a Republican? Because he says what he thinks, and doesn’t give a damn about the consequences. Because he’s thumbed his nose at the political insiders in Washington, at the news media, at every part of “the Establishment,” ever since he announced his candidacy. In effect, he’s saying, “Elect me, and I’ll really shake up this country! I’ll make some REAL changes! I’ll stop those Mexicans from coming in illegally, build that wall, make the NATO countries pay their fair share, battle ISIS and destroy them …”

The Establishment is frightened of Donald Trump. REALLY frightened. If he gets in, he’ll knock their cozy, profitable little Washington empire into a cocked hat. The very thought terrifies them. And so, their watchword this year is, “We’ve GOT to defeat Donald Trump. We CAN’T let him win. We’ll do whatever we have to do to stop him.”

Besides the national outcry about the extreme bias of the media and the pollsters against Donald Trump, there are dark hints being dropped that the election itself is being “fixed;” that the relentless Democrat machine will find ways to boost up the vote for Hillary, unlawfully; to suppress the Trump vote, also by trickery; and that as a result, a Hillary victory is being made inevitable.

Of course, anything’s possible. My personal belief is that Trump will win, anyway; maybe narrowly; maybe in a landslide. I suspect that the American voters may have a gigantic, horrifying surprise for the Hillaryites.

But even if she does manage to win — somehow — I suspect that those who are voting for Trump, will not just hunker down and take it; not just complain about it over their coffee the next morning, then go on with their lives.

In my long life, I’ve never seen such an angry, contentious presidential election campaign. If Hillary wins, and it’s strongly suspected that she got in through electoral fraud, the Trump followers may decide that a second American Revolution is needed.

← Black Americans having another ‘pity party’
Journeying toward Orthodoxy … →