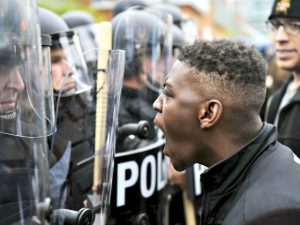 “You White people don’t understand what it’s like to be black in America!”

Of course, the national news media has to take a big share of the blame for the re-igniting of this wildfire. Any story which can be manipulated into “unarmed, trying-to-turn-his-life-around black man murdered by vicious racist White cop”, is blared from the rooftops. Even Fox News this time piled on — and it’s constantly accused of being “right wing” (which it is). But the media as a whole has made these scattered incidents seem to be a “happens every day” phenomenon, when it most certainly isn’t.

The website Zero Hedge offers a racial breakdown of the 900 Americans killed by police in 2015. How many were black? A total of 123. How many White? A much larger 238. Seventy-nine were Hispanic, and the rest could not be identified by race.

Of course the number of black deaths is higher than the black percentage of the U.S. population — a fact that, whenever it occurs, the mainstream media hop on it like a frog on a junie bug. But blacks commit a hugely disproportionate percentage of the crimes that occur in the U.S., so that balances out THAT discrepancy.

How long since you’ve seen a big media hoo-ha over “unarmed White man shot by White cop”? Or “black cop” or “Hispanic cop,” for that matter? A lot longer than Pinocchio’s nose, I’d say. The media just isn’t interested unless the “victim” is black, the policeman, White. There was a White man shot dead by police here in my home county last year, after exhibiting bizarre and threatening behavior and refusing police orders to “Halt!” as he advanced toward them. Didn’t hear about it, did you? The news never got outside this county.

Since the shooting deaths in Louisiana and Minnesota, and the slaughter of the five officers in Dallas, the news media, and some White politicians who should know better, have been parroting this mantra start 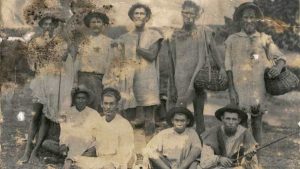 ed by black militants, and which I quoted at the start of this story: “You White people don’t know what it’s like to be black in America!”

Oh, sure. Every time a young black man leaves the house, his momma is worried sick that he’ll be shot dead by some racist White cop. “Look! There’s a nigger! Let’s go kill him!” Sure. Look at a city like Chicago, and it’s not hard to see why “Momma” is worried about Lavondius leaving the house. It’s very possible that he’ll be shot dead, all right — but by a fellow black youth! NOT a White cop!

Yes, we White people “don’t know what it’s like to be black.” For one thing, of course NO White person has ever been held in slavery. Oh, wait … The word “slave” originated from the ethnic term “Slav,” meaning such people as the ancestors of the Russians, Serbs, Bulgarians, etc. That is to say, WHITE people. The reason? The Ottoman Turks held many, many Slavs as slaves for centuries.

And here’s another item that puts the lie to the notion that all slaves in America were black. Starting in the early 1600s, and lasting until Britain finally abolished slavery in its territories in 1839, hundreds of thousands of Irish men, women and children, their homeland having been conquered by the English, were sold into slavery in British North America, and also in the West Indies. Historians, most of whom tend to be liberal, have ignored or tried to hide this history, wanting today’s White people to feel guilty, as if every White American was always the “cock of the walk,” and that all African Americans were his suffering, helpless slaves.

And you still say I “don’t know what it’s like to be black in America”? Well, you’re probably right in some ways. I don’t know what it’s like to have the federal government move heaven and earth to try to make up for injustices (real or imagined) done to my race over 150 years ago. Remember the Irish slaves? Don’t think there’s ever been any efforts to “make amends” to their descendants.

I don’t know what it’s like to make so-so grades in high school, then get admitted to a very highly-ranked university through “affirmative action,” which lowers the bar for black students, giving them admission with lower grades than White and Asian students are required to have.

I don’t know what it’s like to have a “sperm donor” for a father, who knocks up several women, then goes on his merry way, leaving the taxpayers — of all races — to support them through government programs. Many, many blacks have experienced that, but — fortunately — I never have. Guess that makes me “privileged,” huh?

And I don’t know what it’s like to be recruited as a basketball or football player at some big college, have my grades handed to me, then after, oh, say, one year playing ball and doing the dirty with the White chicks, signing a multi-million dollar contract with an NBA or NFL team and leaving the college that recruited me, in the lurch.

I also don’t know what it’s like to be 13 percent of the entire population, but to be chosen almost without exception to sing the national anthem at major public events — and “hip-hop” it up, to delirious cheers from the crowd. Yeah, I guess we White people just can’t sing, can we? Or dance. Or jump. Or run fast. But you think we’re definitely “privileged.”

Well, black Americans, that’s this White American’s take on the subject. I’m sure some people will call me “racist” for saying these things, but that’s OK; I’m used to it. And it doesn’t bother me one bit. You see, so many American White people have jumped onto the “Politically Correct” bandwagon nowadays. Well, Old Corporal doesn’t jump onto bandwagons; he throws rocks at them.

← BREXIT may signal a coming revolution for America, too
Presidential race — then, possibly, revolution? →

5 comments for “Black Americans having another ‘pity party’”