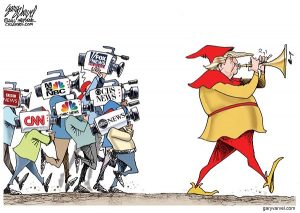 So Donald Trump 11 years ago made a few unsavory remarks about women to a guy named Bush who he thought was the only one who could hear him. And — SOMEHOW — there just happened to be an “open mike” nearby which picked up Trump’s words, and a few comments made by Bush, also.

And, SOMEHOW, that tape managed to survive for lo these 11 years — where, we don’t know. And then, two days before the second presidential debate between Trump and Hillary Clinton, scheduled for Sunday evening, this tape JUST HAPPENED to get leaked to the news media.

Wow! What a series of coincidences!

Folks, we are being played for fools by those who hate Donald Trump so much that they’ll do ANYTHING to keep him from being elected president. And far too many of us are falling for it, hook, line, and sinker.

What was that “open mike” being used for? Why was it “open” when they were on a bus, en route to some kind of function? Donald Trump was years away from any announcement that he was running for president. What reason would have existed for saving that tape all these years? Unless someone who didn’t like Trump, decided to sit on it, “just in case” it could be used somehow against Trump, for some reason, at some time down the road.

And do you suppose this “open mike” could have actually been a secret recording device, activated by … somebody … to catch Trump’s voice saying men’s locker room things about women?

None of the mainstream media — and I include Fox News in that designation, in this case — have asked any of those questions, of course. Why step on the message they want everyone to believe: That Donald Trump is an evil misogynist (racist, homophobe, islamophobe, blah, blah, blah) who should never, ever, EVER be elected president of the United States? Why be responsible reporters, looking for all the facts, when (they think) they have a chance to sink Donald Trump’s yacht, once and for all?

Oh, and, this Bush guy who Trump was talking to, is a cousin of George W. Bush, the former president. And former president Bush, along with his brother Jeb, who Trump defeated soundly in the primaries; and their father George H.W. Bush, also a former president, have all rejected Trump and announced they’re voting for Hillary Clinton. Anyone see a “connect the dots” situation there? If you do, you’re obviously more honest than the mainstream media crowd, who have been very careful about what they’ve reported about this case, and what they’ve pretended didn’t exist.

And here’s my take on the sexually explicit things that Trump said in his — he thought — private conversation with Mr. Bush. If Trump had been making those rema 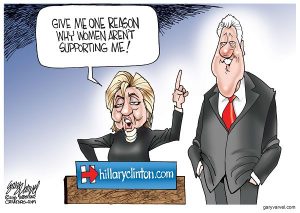 rks before a live audience, knowing that there was an open mike in front of him, it would have been absolutely unacceptable, and he would deserve the condemnation he’s received. But in a private, guy-to-guy conversation, come on, fellows, don’t tell me that most of you haven’t said sexually charged things that you wouldn’t want everyone in town to know about. And for that matter, ladies, don’t try to pretend that a lot of you, in a woman-to-woman conversation with no men around, haven’t made roughly similar remarks about men. You know you have. We ALL have. Including me.

And of course, as they typically do, other prominent Republicans have fallen all over themselves denouncing Trump for his remarks, saying they no longer support him, insisting that he should step down from the presidential race, ad nauseum. Kudos to Trump, who, besides apologizing for his remarks, has said that under no circumstances will he quit the race. And he shouldn’t, either. Why give any satisfaction to Hillary’s supporters who have been denouncing him for over a year? Not to mention the Republicans like Jeb Bush, Ted Cruz, Paul Ryan, John Kasich, and a number of others who either were very hesitant about endorsing him, or have obstinately refused to.

You see, it’s like this: When a Democrat falls afoul of decent behavior, or the law, or whatever, the other Democrats circle the wagons around him — or her — like the pioneers protecting themselves from attacking Indians. When a Republican does the same thing, the other GOP’ers throw him overboard, or break sprinting records running away from him.

To the Democrat party, winning the next election is all that counts. No matter what you have to do to achieve it. Can you say, “Votes stolen by Mayor Daley in Chicago in 1960 to ensure that John F. Kennedy won Illinois — and the presidential race”? And that’s just the best-known instance. The city government “machines” in the U.S. have been almost always Democrat — and largely corrupt.

And because of that, Republicans rush away in horror from any of their compatriots who they think have “behaved badly.” Those flawed citizens are left abandoned, on their own, to deal with the fallout as best they can.

A friend of mine sums it up this way: “The Republicans are stupid. The Democrats are slick; they’re always politicking, 24/7; they don’t care what they have to do to win that next election.”

The Democrats and the national news media are going after Donald Trump like bloodhounds chasing a rabbit. And many Republicans, thinking they’re showing themselves as more “moral” and “decent” than their presidential nominee, are doing the same thing. And too many of us are believing everything they tell us, without ever examining it, like I just did.

It’s your choice to make, my fellow Americans. You’ve got a month to decide. Keep this in mind: The media, the Democrats, and the GOP establishment don’t want Trump in there, because they know he’ll upset their apple cart. If they weren’t truly afraid of him, for those reasons, they wouldn’t be going all out to defame him in any way they can.

One more month, folks. Let’s not be foolish. Or stupid.

4 comments for “The conspiracy to ‘Dump Trump’”