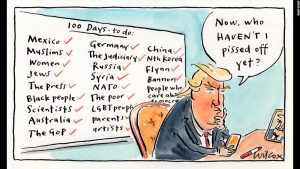 OK, all you liberals, here we go, one, two, three: “WAAAAAH! BOOOHOOO! Poor little immigrant children! That nasty old monster Donald Trump is separating them from their parents! Poor little things! They’re being starved, beaten, molested, and the Republicans don’t care! So sad they can’t be brilliant, and compassionate, and morally superior, like WE are …”

The liberals have been having a conniption fit lately about the separation of illegal immigrant children from their parents. Even the president’s order that the parents and children be re-united hasn’t cooled them down. Of course, the Left’s plan is NOT to be cooled down. They plan to keep screaming and stamping, waving signs, blocking vehicles (sooner or later, one will run over a bunch of them; wait for it). The liberals think this guarantees them a “Blue Wave,” a big win in the November election.

And, of course, the Left believes that every darkskin they can get admitted into the U.S., is a very likely potential Democrat vote.

And here’s the other reason that the heavily Democrat Congress of 1965, having been put beyond any Republican efforts to block anything by the Lyndon Johnson landslide, changed the nation’s immigration laws to allow in many, many more Hispanics, Asians and Africans, and to cut way back on the number of Europeans admitted: On an ideological level, the typical liberal believes that everything that is wrong in the world, is the fault of the White Man. Anything they can do to gradually miscegenate us into oblivion, they’ll gladly tackle.

But it’s all hypocrisy. Do they care about the hundreds of thousands of unborn American babies killed in abortions each year? Hell, no! That’s “A woman’s right to choose.” The baby doesn’t GET any right to choose.

Do they care about the thousands of black children from the South Side of Chicago left without fathers — and in some cases, mothers — every year by the sky-high murder rate there? Not so you could notice it. Remember, the government of Chicago is run by Democrats. Apparently that puts that government off limits to criticism from the “compassionate ones.”

Do they care about all the American citizens who have been killed by illegal immigrants? Of course not. After all, some of those Americans might be Republicans!

Think that last statement sounds unfair, biased, outrageous? It’s no worse than a lot of the things the Democrats have been saying about the GOP, and about President Trump in particular, ever since he was elected in 2016. And spare me the whining about, “But Hillary got more popular votes!” In the Electoral College, that doesn’t matter.

You liberals like to preen and strut about being so “compassionate” and “caring” when it comes to something you think will be a good campaign issue — like illegal immigrants. A bunch of Democrat legislators went to one of the places where those immigrants’ children were being held the other day, not because they were actually concerned about them, but because they wanted to make it look to the American people as if the children were being savagely mistreated, starved, etc. “We kind, compassionate liberals really care about these poor little children! And those racist, unfeeling, heartless Republicans don’t give a damn about them!”

Yeah, sure. The Left is always good at staging dramatic scenes, coming up with “catchy” chants, calling President Trump and his party every dirty name in the dictionary. And at “resisting.” Which means, “The nation’s problems don’t matter! Just keep Trump and the GOP from doing anything about them! And then use that as a campaign issue — ‘The Republicans have accomplished nothing!’ ”

And of course, the Republicans shoot themselves in the foot — on a regular basis. You have just a two-vote majority in the Senate? Then having two or three senators — can you say, “McCain, Flake, Paul,” to announce on each key vote, “I cannot in good conscience vote for the president’s bill,” will sink your boat, every time. And by the way, “Good conscience” means, “I’

ll get even with that son of a bitch for what he said about me during the campaign!”

You liberals think it’s great fun to cuss out Trump in public (usually before an audience of “Hollywood elites” at an entertainment awards show), to call him every vile name in the book, to declare that he should be impeached and removed from office immediately — even, in some cases, that he should be killed! Do you realize you’re talking about the President of the United States? Do you know that the Secret Service investigates threats against the president or his family? You want to end up in jail? Laugh and scoff all you want to — but it could happen. And if so, you’ll be separated from your children!

You liberals have called Donald Trump “deranged,” and “crazy,” among many, many other things. Well, think about this:

Yes, the president is often impulsive; he doesn’t take criticism lightly, or fail to answer it back, often in biting terms. He is, what he is. He’s “not like our other presidents”? Well, so what? Are they all made on an assembly line? Every president has been “different,” in his own way. It’s called “being human.”

Donald Trump made campaign pledges, like other presidential candidates. But he has done his damndest to actually bring those pledges to fruition. A lot of other presidents, haven’t.

And here’s something else which has been different about this president — at least to a degree. Who, in his campaign, and during his presidency, has he always gone out of his to befriend, praise, address in person at many opportunities — I mean besides his supporters in general? If you said, “The military and the various police forces,” you win the $64 prize! He definitely wants them on his side — and they, from leadership down to rank and file, tend to support him strongly.

Now, if you were the president, and you weren’t inclined to suffer fools gladly, and half of the Congress and of the electorate seemed determined to block you at everything you were trying to get accomplished for the country; AND you knew that the country’s military, and its collective police agencies, tend to like you very much — now, what would you consider doing?

I can hear Donald Trump, finally pushed beyond all his patience and willingness to try to compromise, yelling from the Oval Office: “OK, you bastards! You think you’re going to beat me? You think you’re going to stop me at every turn? Well, LISTEN TO THIS! National emergency! Martial law! Better look over your shoulders, you fake news liberals, because we’re COMING FOR YOU!”

I’ve outlined that possible scenario to two of my friends — one a Trump hater, the other a Trump fan. Both said, in effect, “Oh, the generals would never do that!”

Think not, fellows? Well, we wouldn’t know for sure until and unless it happened, would we? But look at the way all the liberals, in Congress and out, have behaved toward Trump for the entire time he’s been in office. Look at Trump’s temper, and at the way he’s often determined to get what he wants, no matter what. And — here’s the most important part: Look at the half of the American population that backs Trump, that is disgusted at how he’s been treated, at how the Left seems to think that it can get away with anything directed toward the President of the United States. So far, that half has mostly complained about all this over their coffee cups. But there comes a time when people get fed up. They decide: “Enough! We’ve got to do something about this!”

And think about this, too: There are over 300 million firearms in private hands in this country. The vast majority are in the hands of people who, while they might not be fanatical Trump supporters, will tend to side with the conservatives, Republican or otherwise. A declaration of “national emergency” and “martial law” might cause many of them to fall into step with the military and police.

Hey, you liberals, the outcome, if that happened, would NOT be pleasant for you people. I’m not saying I want it to happen. But, remember, it COULD.

Better start being more careful. Better look over your shoulders — and often.

← ‘The World Turned Upside Down’
The Madison, Indiana of my youth →