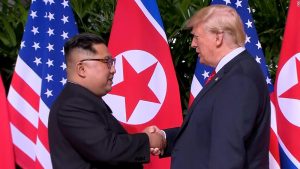 There are more ways to kill a cat than choking it on buttermilk.

Ever hear that old saying? What it means is, “If one thing hasn’t worked, for 65 years, then let’s try something else.” Or words to that effect.

Shepard Smith on Fox News, who anyone watching his afternoon show knows holds Donald Trump in the highest contempt, is talking right now on the show about Kim Jong Un’s “horrific human rights record,” how many of his own people he’s killed, how they’re starving, and so forth, and why on earth didn’t the president bring up those things with Kim when they were talking about North Korea’s giving up its nuclear weapons?

Well, Shep (I like to think of him as “Limp Wrist” — guess why?), maybe because that’s been common knowledge around the world since about 1948, when his grandfather, Kim Il Sung, became the first Communist dictator of the northern half of the Korean peninsula. Other U.S. presidents have denounced the Kim family (seems that about half the Koreans have the family name of “Kim”; must be the Korean equivalent of “Smith”) periodically ever since the end of the Korean War (without a treaty, of course; only an armistice) in 1953. Has it stopped the heinous human rights abuses? No. How would Trump’s making it the main issue during his meeting with Kim about the regime’s nuclear weapons help? Not much that I can see.

Trump has played a unique and clever game with Kim since he became president. The North Korean dictator made a point of having atomic missiles fired off every once in a while, some of them soaring over Japan; threatening to send death through the skies onto the U.S., or seize Guam, or whatever else he could think of to try to get us off balance.

Of course Donald Trump being Donald Trump, he fired Kim’s threats right back at him, hinting that the entire northern half of Korea might go up in a flash of atomic destruction if the dictator pushed him too hard.

But then — probably when Trump decided that the time was right — the tone changed. The president invited Kim to meet with him for a conference — the first time a U.S. president has ever met with a North Korean ruler, whether it’s Kim, his father or grandfather. Kim agreed! Then he arranged with the South Korean president for the two of them to meet at the Demilitarized Zone that separates the two halves of the country. They shook hands, chatted, smiled broadly for the cameras, appeared to relate as warmly as if they were two cousins who hadn’t seen each other for many years. Sixty-five years, maybe.

It was like the military march the American band played when Gen. Cornwallis’s British army surrendered to Gen. George Washington’s Continentals at Yorktown, Va., Oct. 19, 1781. It was called “The World Turned Upside Down.” That’s how many, many in the world viewed this unprecedented meeting of the leader of the Free World, and the ruler of the rump country that started the Korean War in 1950.

The war was started because the new North Korean regime, and the Red Chinese rulers who had just seized power the previous year, wanted to take over South Korea before it could become the gigantic success they suspected it would. Of course,with U.S. and other world troops aiding the South Koreans, the Communists failed, with an armistice being declared on July 27, 1953, and the Demilitarized Zone separating the two Koreas ever since. 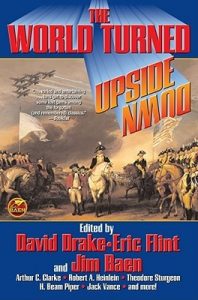 s, events that nobody expected, a combination of circumstances that “just happen” to all occur at once, DO turn the world upside down! For Europe in the late 18th Century, it was the French Revolution, which shook up that continent for the better part of a century, and in which many thousands were killed. In the early 20th Century, it was the formation of the Soviet Union out of Czarist Russia, in the last days of World War I. Later in the century, it was the rise of Adolf Hitler and his Nazis in Germany, then World War II. After the Allies won the war, then came the seizing control of China by Mao Tse-tung and his Communists after many years of war with Chiang Kai-shek and his Nationalists.

The Soviet Union took over all of Eastern Europe, installing tin-pot dictatorships which were forced to toe the Kremlin’s line. Stalin and his successors constructed such an all-encompassing, iron-clad totalitarian regime in Russia that it became the accepted assumption in the West that it would be there, with its stranglehold on hundreds of millions of people, until the end of the world.

But then in 1956, there was a revolution in Soviet-controlled Hungary. The Hungarians had had enough of totalitarian misery imposed on them, and they rose up and threw out the Russian-backed government. Moscow sent an army into Budapest which crushed the rebellion, killing thousands. The Communists were back in charge. But the world had started to turn — slowly.

Then in 1980, the people of Poland rebelled against the Reds, also. They didn’t achieve independence, then, either. But the world was turning, more rapidly. A few years later, U.S. President Ronald Reagan, speaking to Soviet Chairman Gorbachev about the Berlin Wall, said dramatically, “Mr. Gorbachev, tear down this wall!” In 1989, the people of Germany did, and the two halves of the country became re-united — under a democratic government. In 1991, the Soviet Union itself went the way of all flesh, after 74 years of power that, surprise, didn’t last forever, after all!

The Communist regime in China studied the Soviet demise closely — trust me on this. They said, “Maybe this ham-handed, ‘everybody under our thumb and starving,’ deal we’ve been practicing for the past 42 years, isn’t working as well as we thought. We want to stay in power, but maybe if our people had a better standard of living, were closer to being satisfied with their lives, we’d be more popular with them. You think?”

And now, nearly 30 years later, the changes the regime made in the way it did things, have produced a sea change. The Chinese standard of living has soared. News films from the 1960s and ’70s showing sad people walking the streets of Beijing wearing the ghastly Mao jackets, have turned into ones with people dressed very similarly to how they would be in the U.S., with vehicles crowding the streets, etc. Are the people still living in a Communist dictatorship? Of course — unfortunately. But things have changed, a lot. The Chinese world has turned.

And President Trump’s beginning of the process in North Korea, may bring one of those historic moments in the “Hermit Kingdom,” too. Let’s all hope and pray for that.

And if you think I posted this column today, because it’s Flag Day, AND President Trump’s birthday — you’re right!

← Here’s how it all started, folks …
Hey, leftist liberals: Better watch your backs! →