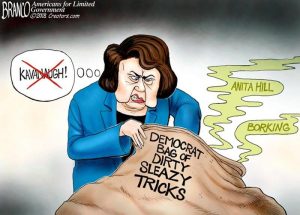 Wicked Witch of the West 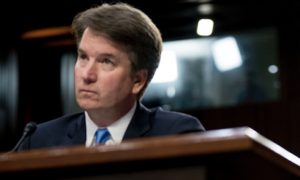 So the conniving, totally unprincipled Democrats on the Senate Judiciary Committee have finally gotten what they’ve been saying they wanted: A seventh FBI investigation into Judge Brett Kavanaugh’s background to see if somehow, they don’t care how, some piece of dirt can be dug up that will give them a half-way legitimate excuse to claim that Kavanaugh really is a nasty, drunken rapist who has no right to be approved for appointment to the U.S. Supreme Court.

Because they haven’t been able to find anything worthy of that name so far. Despite their emotional, “we are the morally superior ones” wailing in their speeches during Judge Kavanaugh’s hearings, which went well for Kavanaugh, President Trump’s second appointment to the court, until the letter from Christine Blasey Ford, sat on by Sen. Diane Feinstein for six weeks, was made public just days before the committee vote on Kavanaugh was scheduled. Ford had wanted to remain anonymous (she said), but someone … hmmm? … leaked her name to the press, and the liberal news media went nuts, as they always do whenever they think they have something to smear the Republicans with.

Did a 17-year-old Brett Kavanaugh, in 1982, attempt to rape a 15-year-old Christine Blasey? She says she is certain that he did. He says that it is absolutely not true. He has made no hesitation in denying her accusations, strongly, and the day they were first publicized, said that he wanted the Senate committee to reconvene the next day so he could defend his truthfulness and reputation. Doesn’t sound like the reaction of a sneaking, guilty-as-charged rapist, now does it?

And to their credit, the Republican majority on the committee has defended him, as they should have. The four people who Ford named as witnesses to her alleged attempted rape, all have said they have no memory of it. The three other alleged “victims” who “came forward” after the Ford letter went public, have been dismissed as either outright lying, or as providing not a shred of evidence to prove their allegations. The Republicans have not been afraid to speak up against these women’s bogus accusations, and it’s to their credit that they have.

But Sen. Grassley, the chairman of the committee, has been much too compliant with the Democrats when they have demanded more time to speak, more investigations, more ANYTHING to slow up the process and find some way, ANY WAY, to sabotage Judge Kavanaugh’s nomination to the highest court in the land. And his fellow Republicans have, too often, supinely and stupidly gone along with Grassley without protest.

As a party, I think the Republicans are more honest and more fair than the Democrats (which isn’t saying much). But all too often, the Dems “see ’em comin’ “. They “steal their clothes while they’re in swimmin’ “. To be more frank, the Republicans all too often do things, or fail to do things, in a way that is stupid, and that plays right into the hands of the scheming Democrats.

A friend of mine — a Democrat himself, by registration, but in no way sympathetic with their ideology — when describing what I spoke of in the last paragraph, always says, “Oh, those Democrats, they’re smart, they’re clever, they’re smooth, they’re slick”, etc. In other words, if the Devil managed to pull off some colossal scam on God in Heaven, winning some kind of contest they were having with each other (I know, that would never happen; just sayin’), my friend would say, “Oh, that Satan, he’s smart, he’s smooth, he’s clever …” Maybe — but he’s EVIL! As are the Democrats — their national leaders, I should add. I’m not pointing a finger at any of my friends who are Democrats.

Sen. Lindsay Graham of the Republican majority did finally unload, big-time, on the Democrats in Friday’s session, after Kavanaugh had given his strong opening statement to them. Graham told what many who have been following this case were thinking: That it was a colossal scam, that the Democrats wanted power so bad they’d do anything to get it, and that he hopes they never DO get it, and the like. Then, later that day, came Flake’s partial cave-in to the Dems, after the hysterical women had screamed and yelled at him while he was trying to get on an elevator to return to the hearing room.

So, at least now the nomination was moved on to the full Senate, by an 11-10 vote, despite all the efforts by Sen. “Half-Breed” Booker, whose favorite sound is his own voice; Sen. Sheldon Shithouse — I mean Whitehouse — and all the angry Democrats, including Richard Blumenthal, who was caught several years ago in the lie, “I served in Vietnam” (no, he didn’t.)

These Democrats have tried to name Brett Kavanaugh as not only an attempted rapist, but also as a sloppy drunk in high school and college who sometimes didn’t remember things he had done the night before. Now, as a recovering alcoholic (21 years sober now, thank God) I know that these “blackouts,” as we alcoholics call them, can happen. You’ve been drinking all evening, you’re obviously drunk but still functioning — and then the next morning when you wake up, you can’t remember what you did late in the evening. And you’re thinking, “Good grief, I hope I didn’t insult anybody!” or whatever. Happened to me, a number of times.

But the problem with that in Kavanaugh’s case is, he was the valedictorian of his class in high school. He went on to be an excellent student in college and law school, and has served with distinction on two or three high courts since then. Could a guy who often got “sloppy drunk” and had “blackouts” achieve all that? I doubt it very seriously.

The judge has what appears to be a happy marriage, two beautiful little girls, he coaches girls’ sports, is a devout member of the Roman Catholic Church in which he was raised. Literally hundreds of women who have known him since high school, or who worked for him as law clerks, have made a point of coming forward to praise him as a man who always respected women, who employed many of them, who acted toward them as a gentleman should. They haven’t been shy about saying that. They didn’t “request anonymity” as Christine Blasey Ford originally did.

And so, the seventh FBI investigation into Judge Kavanaugh’s character is now in progress. My guess is, it’ll recover nothing new of any significance. Unless the “clever, slick, smooth” Democrats have found a way to “fix” the investigation, as they’ve done with so many other things.

The Republicans need to stick together on this. Don’t forget, GOP, you’ve only got 51 seats in the Senate. Out of 100. You don’t have any votes to spare.

The Democrats have constantly prated on about how “We need to get to the bottom of this!” in their attempts to stall and (they hope) destroy the Kavanaugh nomination. Well, when you “get to the bottom” of something, you find an asshole.

And here’s another thing: If you’re sick and tired of the Democrats and their corrupt, power-grabbing ways; of the totally biased news media which would dearly love to see President Trump impeached and dragged kicking and screaming from office; and of — well, I was going to say, “of the spineless, stupid Republicans,” but they’re our only alternative right now; then be sure to vote on Election Day. Don’t say, “Oh, the economy’s going well, the unemployment rate is at record lows, everything’s OK, so I’ll just stay home.” DON’T DO THAT! If a bully hits you in the jaw, you don’t: (a) Apologize to him for saying “nigger”; (b) say, “Come on, fellah, let’s have a beer and talk about our differences”; or (c) tell him you’ll pray for his soul. NO! You hit him back, harder than he hit you! Pick up a heavy object and clout him good and proper with it. You don’t have to take that!

Are you listening, Republican officeholders?