“We cannot have the same America, with different people.”

If one had to sum up Jared Taylor’s incisive, riveting new book, “White Identity: Racial Consciousness in the 21st Century,” in one sentence, the one above in Mr. Taylor’s own words would be better than any. For Taylor never deviates from his central thesis throughout this book, published this year by New Century Foundation: That White Americans, who built this country and are still in the majority — but a steadily shrinking one — must wake up, shed their “White guilt” inhibitions, and start to defend what is theirs, for if they don’t, America will continue to be taken away from them by other, steadily growing racial groups.

Of course, liberal reviewers and critics will condemn Taylor’s book as being “racist” and him as a “hatemonger,” and worse, as they always have ever since publication of his landmark book “Paved With Good Intentions: The Failure of Race Relations in Contemporary America,” in the early 1990s. But Jared Taylor has never allowed criticism to silence his views on race in America. 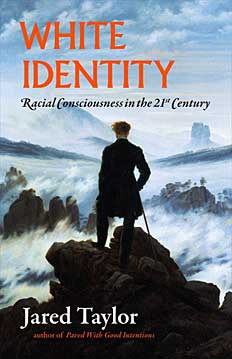 In “White Identity,” Taylor examines such facts as that all the fulsome praise from mainstream politicians and news media types for “diversity,” in institutions and daily life, is sadly mistaken. Racially homogeneous nations are more likely to be both stable and democratic, Taylor declares, citing such examples as Scandinavia and post-World War II Japan. “Diversity” more often leads to racially unstable, volatile situations such as prevail in Malaysia and India. He also points out that much-vaunted “integration” has mostly failed in America — primarily because no racial group, as a whole, really wants it. People in general prefer to live next to and associate with those who are like them, Taylor says.

Taylor explores what he terms “the science of human nature,” the human need for racial identity, and the fact (not a “social construct”) that there are inherent differences — physical, mental, temperamental — among the various races of man.

In succeeding chapters, Taylor addresses the issue of racial consciousness in America, A.D. 2011, Black, Hispanic, and Asian. He tells how racial consciousness, and pride, is widespread and accepted among those three groups — but is branded as “racism” and “xenophobia,” and condemned out of hand — sometimes even physically attacked — if such consciousness and racial pride dares to rear its head among White Americans. He also notes the fact that White fertility in America has dropped below the replacement level, as it has all over Europe.

In a chapter on White racial consciousness, Taylor recalls how such towering American leaders as Thomas Jefferson, Abraham Lincoln and Theodore Roosevelt wrote without apology of what they believed was the “inherent superiority of the White race.” Especially interesting is the historic fact that Lincoln believed, as strongly as he believed that slavery must end, that black people and White people could not live together on a basis of equality and that the freed slaves should be re-settled somewhere else, such as the Caribbean, or their homeland, Africa.

Finally, in a summing-up in the final chapter, Taylor warns all those among his readers who are White Americans, that they will lose their country if they do not wake up to the current racial realities. His final paragraph is unambiguous and chilling:

“The demographic forces we have set in motion have created conditions that are inherently unstable and potentially violent. All other groups are growing in numbers and have a vivid racial identity. Only Whites have no racial identity, are constantly on the defensive, and constantly in retreat. They have a choice: Regain a sense of identity and the resolve to maintain their numbers, their traditions, and their way of life — or face oblivion.”

Taylor’s book is written in a concise, readable style, which never indulges in racial slurs or other harsh language, although once or twice when writing the word “nigger” seems to be required by the context, he does not hesitate to write it. The entire book is heavily documented — there are 43 pages of “Notes” at the end.

I heartily recommend Mr. Taylor’s newest book. If you’d like to order it, go to the homepage of Corporal’s Corner and look in the column on the far left for the link to “American Renaissance,” Mr. Taylor’s website. Click on that, and when you’re taken to the AmRen website, look for a picture of the cover of “White Identity,” which will be just the same as the one accompanying this review. Clink on the photo on his website, and it will enable you to place your order.

← Israel won’t give back the West Bank
The Mormons: They’re ‘coolin’ up,’ bro! →