Jimmer Fredette is coming on strong, looking more and more like a high NBA draft pick. The “too slow,” “can’t play defense” (translation: Too White) jibes are growing fainter and fainter.

“The Book of Mormon: The Musical” walked away with nine Tony Awards Sunday night,  bringing a unique combination of catchy tunes, earnest young Mormons, backward black Africans, and a lot of cuss words to Broadway and the liberal, playgoing crowd which normally views organized religion with bemused contempt. But they loved “BOM.” So did the critics. 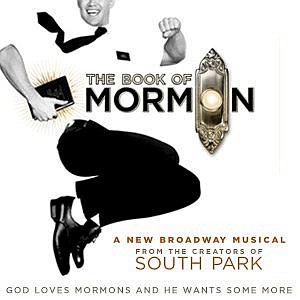 The real Mormons, the ones not just portraying roles in a play, turned a critical eye and some printed criticism at how their faith was treated in the production. But, hey, it’s still publicity for the Latter-day Saints.

Former Massachusetts governor Mitt Romney is considered the leading contender for the Republican presidential nomination for 2012. Former Utah governor Jon Huntsman announced today (June 14) that he’ll soon throw his hat into the ring as a candidate for the same nomination. Huntsman and Romney are distant cousins; and they’re both members of the Mormon church.

A potential NBA star who’s a squeeky-clean Mormon from Brigham Young University; a play centered on his faith that gets rave reviews; and two possible future presidents of the United States. LDS have come a long way from 1847 and “This is the place.”

At one time, the average American’s only mental picture of Mormons was either (a) two young men in black suits, white shirts and dark ties, asking if they could tell him about the Celestial Kingdom; or (b) a bearded patriarch in Utah with five or six wives. Many thought the Mormons downright “weird.”

But, since World War II, the church has gradually but steadily moved closer to “mainstream” — but with important differences.

The Osmond Brothers — later just The Osmonds — started paving the way in the late 1950s with their music, energy and wholesome good looks. The Mormon Tabernacle Choir had earlier set a high standard for the Osmonds with its magnificent, unmistakable sound in countless concerts around the world. There is no other singing group on earth — none that I’ve ever heard, at any rate — that sounds quite like that choir.

Significant numbers of teen-age girls reportedly converted to the Mormon church due to their fascination with the Osmonds. I’ve never seen figures, if any exist, about the influence of the choir, but it certainly has given the church many years of the finest publicity. 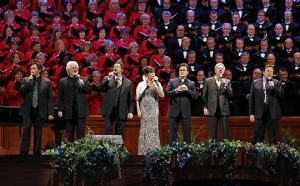 In recent years, BYU-TV has also put many non-Mormons into contact with that LDS-owned and operated university, and at some of the things young Mormons do when they’re not performing their missions or marrying young and having lots of children. I’ve seen some musical programs, vocal, instrumental and dancing, on that channel that stack up very well with any I’ve ever enjoyed, anywhere. A bluegrass music performance on BYU-TV a few months ago was the best I’d ever heard from young, relatively inexperienced musicians. Unlike the stereotype of the Evangelical Protestants who often are their greatest critics (those Evangelicals often seem stiff, humorless, and unable to relax), the Mormons tend to be a singing, dancing people.

Of course the Mormon faith is centered in Utah, the state founded by the LDS members in 1847 after they were driven out of several other, more eastern states due to prejudices against their faith and also, to be fair, to some actions their leaders had taken over time that weren’t too well advised.  Though the Mormon majority in the Utah population has declined somewhat in recent years due to heavy in-migration of non-Mormons, they still make up about 60 percent of all Utahans.  And there’s no doubt that with their numbers, their organizational discipline, and their willingness to work hard, they “run the state.”

This fact appears to gall many of the non-Mormon readers of the state’s largest newspaper, the Salt Lake Tribune. The paper, which is owned by a non-Mormon family, appears to select certain stories especially so its reporters can give them a sly, anti-Mormon spin. This brings some of the most vile posted comments I’ve ever seen on the web, attacking the Mormons and their church in every way imaginable. Other posters, either Mormons themselves or “Gentiles,” as Mormons used to call those not of their faith, who feel that the LDS church and its people are being defamed unfairly, often answer the negative comments. The non-Mormons who voice anti-LDS sentiments often refer to the Mormons as “mo’s.” The Mormon defenders, in their turn, call the other side “hate-mo’s.” 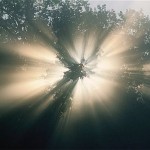 So the Mormons, who take their faith seriously if anyone does, have come a long way from that grove of trees where LDS members believe the Heavenly Father, Son and Holy Ghost appeared to a farm boy called Joseph Smith in the early 19th Century, commanding him to form a restored Christian church. They’ve come through the early days, the controversy over the Golden Plates; the hounding of members out of one state after another as members of other faiths perceived them as a threat; the long trek to Utah; the outrage of Americans over polygamy, which the Mormon church outlawed among members in 1890; the entire 20th Century which saw the greatest growth among membership, and also criticism of the church over its ban on the Priesthood for black men (that was lifted in 1978); and finally, as its 200th birthday approaches (in 2030), mainstream respectability, with important differences from the other Christian churches.

Even the percentage of Americans who said they’d never vote for a Mormon for president has declined markedly since 2008. Which means Romney and Huntsman each may have a chance.

And their story has even lent itself, very winningly, to a Broadway play. And BYU features some tremendous musical shows, too.

And Jimmer Fredette shoots from downtown like nobody I ever saw, and has an awesome cross-over dribble.

Why, these Mormons have become downright “cool!”