They’ve made another movie about Shakespeare! That’s the good news.

Now the bad news: Once again, as in “Shakespeare In Love,” The Bard himself plays second fiddle to someone else. In “Shakespeare In Love,” it was a 16th Century feminist — of sorts — who captures his heart, and thwarts the nasty old masculine Elizabethan rule that women can’t appear in stage plays, by doing just that, disguised as a boy, playing a girl …

But the latest slur on the name and reputation of the greatest literary man of all time is worse — or so the reviews imply. I haven’t seen “Anonymous,” which was released yesterday. And I wouldn’t be caught dead watching it.

Why am I so totally soured on a movie I haven’t even seen? Well, because it takes a canard that was started in the mid-18th Century — namely, that William Shakespeare “didn’t really” write what we have all been taught he wrote — and gives it a credibility that it certainly doesn’t deserve. 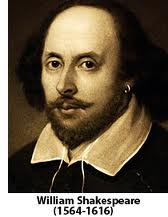 This highly improbable theory, advanced by various “scholars” who have come to be known as the “Oxfordians,” goes like this: William Shakespeare was a rural rustic from the small town of Stratford-Upon-Avon; he didn’t progress beyond grammar school. He was never privileged to hang around royal courts, learning about all the really important things from his betters. He NEVER WENT TO COLLEGE! How could anyone who NEVER WENT TO COLLEGE possibly write even a mediocre play? Let alone the greatest literary canon in world history?

No, no, they say, Shakespeare was merely a front for some brilliant (read: Rich; WENT TO COLLEGE!) nobleman. Someone like, oh, Edward de Vere, 17th Earl of Oxford. Or maybe Henry Wriothesley, 3rd Earl of Southhampton.

Who? Well, Oxford was a British nobleman of Shakespeare’s time who was a courtier, a playwright, and a poet. Wriothesley was another nobleman, younger than Shakespeare, to whom Shakespeare may have dedicated his “Sonnets.”

“Anonymous” centers on Oxford (played by Rhys Ifans), whom it portrays as having been the illegitimate son of Qeen Elizabeth I! (Joely Richardson). Later, as an adult, he is depicted as having fathered Wriothesley — also by the Virgin Queen. Incest, anyone?

The convoluted plot relegates William Shakespeare (Rafe Spall) to bit-player status, as a drunken, semi-illiterate actor who De Vere decides to put up as a faux playwright for material he has in fact written himself.

The rest of the plot doesn’t matter. You can go see the movie if you really want to know. But the whole premise of this film, I find to be vile and revolting.

To the best of my knowledge, there has never been a Shakespeare biography filmed that presented him as the central character in his own life, as the main player in the movie. I can remember years ago, when I first discovered Shakespeare and became fascinated by his life, I thought, “Gee, I wish they’d make a biographical movie about him.” But the more I pondered it, the more I thought, “Well, with his having written about the ‘Dark Lady of my passion’ in the Sonnets, and knowing how Hollywood thinks nowadays, they would depict him as having a secret, black girlfriend, who actually writes all his plays, while he takes all the credit.”

A few years later, when “Shakespeare In Love” was released, it came pretty close to doing just that, except the girlfriend wasn’t black and I don’t think they tried to claim she was the secret author of the Shakespeare canon.

The notion that “someone else” (someone of the aristocracy, who had GONE TO COLLEGE) wrote The Bard’s plays, is laughable in the extreme. Shakespeare was a man of numerous friendships. His friends knew him well; they knew he wrote the plays that they (and he) acted in.

He died in 1616. Then, in 1623, when his friends and former King’s Men theatrical company partners, John Heminges and Henry Condell, collected nearly all of his plays and published them as the First Folio, they asked his friend and fellow playwright Ben Jonson to write a dedication. In it, Jonson referred to their friend Will as “The soul of the age; the applause, delight, the wonder of our stage.”

History owes a debt to Heminges and Condell that is almost unimaginable. About 20 of the 38 Shakespeare plays then extant had never been published before their appearance in the First Folio. A number of those 20 had to be pieced together by the friends’ using Shakespeare’s own “foul papers,” or rough drafts as we would say today, in his own hand, which were then laboriously set in type by five separate printers. Historians who have examined first edition copies of the First Folio — there are about 225 in existence — have ranked the printers from “A” (the most skilled) through “E” (likely an apprentice whose typesetting left much to be desired.)

More than half of The Bard’s plays would have been lost to history, most likely, had not John Heminges and Henry Condell thought so highly of their deceased friend, and held his genius in such high regard, that they went to great lengths to preserve them in the First Folio. Does anyone think that in a city as small as London was in those days, if someone else had written the plays, and Shakespeare merely taken the credit, word would not have gotten out?

That’s why I view this “Anonymous” flick as a fraud — a perpetuation of a slur originated by elitists who couldn’t stand the thought that a mere glovemaker’s boy wrote the greatest literature in world history.

“Anonymous” is much ado about nothing.

1 comment for “Another movie slurs Shakespeare, the Immortal Bard”