American newspapers from larger cities tend to reflect their regional peculiarities, likes and dislikes, and so on. That’s true of even the New York Times and Washington Post, which are considered national news media outlets as well as ones reporting on their respective cities.

But I’ve never found one that was as militantly regional, and as slanted when it comes to dealing with those regional peculiarities, as the Salt Lake Tribune.

The Trib is the largest-circulation newspaper in the state of Utah, which, as we all learned in school, was founded and built by the Latter-day Saints, better known as the Mormons. They still make up about 60 percent of the Utah population — maybe a little more — so one hearing that name, “Salt Lake Tribune” for the first time, and never having read an article from it, might assume that the newspaper would more or less reflect the “peculiar” (in the sense of “unique”) Mormon view of the world. 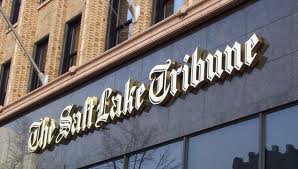 Actually, the Tribune was founded by a Catholic family which owned and operated it for many years. At some point in the 20th Century their descendants sold the Tribune to other owners, who are also non-Mormon. The Tribune styles itself “The Independent Voice of Utah,” and in Trib-speak, “independent” means, “Taking the very hide off the Mormons at every opportunity.”

The Trib carries a lot of Mormon-related stories. That’s to be expected; newspapers in Massachusetts no doubt feature a lot of news about the Catholic church. But it’s in the way the Trib’s reporters and editors handle the stories that makes it obvious they have no use for the Mormons, and love to “gig” them at every opportunity.

If there is a story about Mormon neighborhoods in Utah, it will note with satisfaction that they are “dwindling” or “mostly middle-aged and older,” as if the church is dying out in the very state that it founded. If it is a story about how the church operates in Utah, it will include plenty of quotes from people more than willing to say negative things about the LDS. If it’s about Mormon missionaries, it will allege that there are a “dwindling” number of young LDS Utahans willing to be missionaries for two years, as the church expects. The Trib loves the word “dwindling” whenever it can be applied to anything Mormon.

The Trib positively salivates over stories about gay people in Utah, because they give its faithful readers and posters the opportunity to rant and rave in the “Comments” sections at the end of each story, about how “awful” the Mormons supposedly treat gays, and about how the Mormons “hate” homosexuals. The fact that the Mormon church was heavily involved in an anti-gay marriage campaign in California several years ago is always mentioned, in scurrilous terms, by the anti-Mormon posters.

And the Utah legislature is a favorite target, being made up heavily of Mormon Republicans as it is. To the Trib, if you’re a Mormon, a Republican, both, or a religious person in general, any stories about you will be spun in such a way as to try to make you look like (a) a simpleton; (b) an authoritarian; or (c) a deluded believer in fairy tales.

As you’ve no doubt guessed, the Trib’s readers, or at least most of those who post, are heavily non-Mormon. No, make that, heavily ANTI-Mormon. The more anti-Mormon, anti-Utah legislature (they often refer to it as something like “the theogislature,” to imply that Utah is a theocracy run by the Mormons), or anti-religion in general a story is perceived to be, the more “Comments” and the more “Likes” it garners. Sensible replies to anti-Mormon comments normally get few if any “Likes,” and sometimes are answered by six or eight different anti-Mormon posters who question the original poster’s intelligence, sexual preference, etc.

Read the Tribune’s “Comments” for a few months, and you’ll learn a whole new regional dialect: Utahspeak. A few examples: “Mo’s” or “Mo-Mo’s” are Mormons. “Hate-Mo’s,” a term coined by Mormons or those sympathetic to them who post on there, means, as you might guess, people who voice hatred of the LDS church and its members. Any reference to “jello,” which Utah folklore holds is a favorite Mormon dessert, also means “Mormons.” References to “Utah County” always are a swipe at the Mormons, too, as that’s where Provo and Brigham Young University are located. The implication is that anyone from (heavily Mormon) Utah County is a “retard.” Or, as a variation, a “Utard.”

References to the “ward” of a poster the majority doesn’t like (such as me, for instance), are an implication that, “You must be a Mormon, because who else would defend those @#!*+%!” I’ve told them repeatedly in my posts that I’m an inactive Methodist from Indiana, who has never been and is not likely ever to become, a Mormon, but they refuse to believe it. As far as they’re concerned, I’m a Mormon from Utah who is lying about his identity. OK, folks; think what you want. It’s not hurting me any.

I’ve found that anyone who posts on there regularly and argues with the “Hate-Mo’s”, becomes very unpopular on the website. I’ve been told that the reason I never rose higher than corporal in the Army (my screen name is Oldcorporal) is that I’m a “retard.” I’ve been told to stay off that website (not by the newspaper, though) if I don’t like what they’re saying on there. When I retaliate by saying, “If you hate Utah so much, why don’t you move somewhere else?”, that makes them twice as mad.

As a matter of fact, the anti-Mormon posters on the website seem to be perpetually angry, perpetually blaming the Mormons for anything they find “wrong” with Utah (such as its liquor laws, which are more restrictive than those of some states but a little looser than others), perpetually trying to argue away anything positive about their state that is published in a Trib story. To give the newspaper its due, yes, it does run a “Utah good news” story once in a while, but the usual suspects always try to throw cold water all over it.

I think the Hate-Mo’s feel disenfranchised in their own state, although obviously they have the vote just as anyone else does. They are, almost without exception, liberal Democrats in a state that’s otherwise heavily Republican. They are members of “minority”religions, rather than the Mormons. Quite often, they are outspoken, not to mention obnoxious, atheists, judging from their comments on any story reflecting on religious faith. A typical post from one of those people will be something like, “I’m too intelligent to believe in some fairy tale about an imaginary man in the sky,” or words to that effect. I’ve told them in several posts, “If you can’t see it, touch it or spit on it, it doesn’t exist, in your book, does it?”

They really don’t like that. I’ve been called a lot of names on there. Then I always come back with, “He who descends to name-calling has already lost the argument.”

Then they get even madder. Mad, frustrated Hate-Mo’s. Boo-hoo! Cry them a river!

1 comment for “Tribune’s favorite sport: Hating on the Mormons”