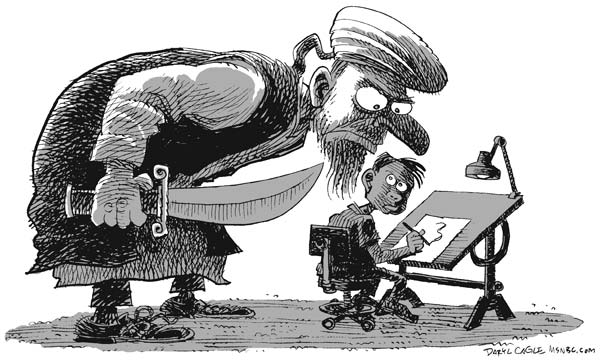 Muslim respect for “freedom of the press”

Another Muslim massacre, another round of “expressions of outrage” about the latest raghead murders, these of (unarmed) journalists who had had the unforgivable gall to poke fun at the Muslims’ humorless and rigid views about their prophet Mohammed, and their religion in general.

Yes, President Obama, it’s an atrocity and an outrage and we stand with the French people in their hour of grief, yadda, yadda, yadda. Now you can go back to your golf game.

But these formal denunciations, whether they come from Obama, or Pope Francis, or the French president, or whoever, if not backed up by firm action, are just hot air, blowing in the wind. Something has to be done. I mean, besides uttering mealy-mouthed words. And by “something,” yes, I mean force. That is the one thing these Muslim terrorists understand, and respect.

Of course the French police are searching high and low for the three Islamic low-lifes who killed the 12 French journalists — including four cartoonists who had drawn “anti-Muslim” pictures published in Charlie Hebdo , the French satirical newspaper in Paris, attacked Wednesday. But that’s not enough — not nearly enough.

The millions of Muslims now living in France (a pox on the stupid politicians who opened the ports and welcomed them in!) tend to be concentrated in the larger cities, especially Paris. And they tend to segregate themselves in particular housing projects there.

Five’ll get you ten that Muslims are at this moment hiding the two scumbags still at large in one of those housing projects. It wouldn’t take a genius to conclude that one way to get them handed over, would be to surround those projects with French army troops, tanks, artillery, etc. The police, leading the way with the army as back-up, could announce in front of those projects, that those three men had BETTER be turned over, post haste, or the poilou’s fingers on the triggers of the weapons in the tanks, and of the lanyards of the artillery, might start getting MIGHTY ITCHY!

And if the inhabitants of those Muslim projects insisted that the assassins were not there, then large numbers of heavily armed police should enter the projects — by force, if necessary — and search them very thoroughly. If the Muslims tried to start trouble or interfere with the searches, well, the police have the right to defend themselves.

Then, if worse came to worst, once the police had been evacuated from the projects, the army artillerists should be ordered to “fire at will” — or maybe I should say, “At Abdul.”

I can hear readers of this article gasping in shock now, and saying, “Oh, they couldn’t do THAT! They’d be killing innocent women and children!”

That’s right; they would. And that would give these Muslim thugs pause, in such a way that physical danger to themselves, does not appear to do. It’s my opinion that they are all mentally ill, anyway. But the thought of their wives, children, elderly parents, whatever, being blown to whatever translates as “Kingdom Come” in Arabic, might cause some second thoughts. Thoughts that JUST MAYBE this campaign of murderous violence against Westerners was turning from something that gave them a tremendous RUSH, to something that might leave them bereaved of their own families.

Do you find it horrifying that I am proposing this? If you were alive during World War II, or studied it in school, were you equally appalled at our atomic bombing of Hiroshima and Nagasaki, which killed hundreds of thousands of civilians? Or the Royal Air Force’s firebombing of Dresden and other German cities, slaying more thousands of women and children? Well, you say, that was part of a terrible world war, and we had to do whatever we could to win it.

Well, folks, even though our leaders, and the leaders of the Western European nations, won’t admit it, we’re in a war right now. Yes, a different kind of war: No front lines; no pitched battles. But it’s a war, of surreptitious bombings and brazen shootings by shadowy — or as was the case yesterday, blatant — extremists who don’t care how man Westerners they kill, as long as they perceive it as advancing their perverted “cause.”

These Muslim fanatics — who may well be distorting and violating the tenets of their own religion, for all I know — have shown no hesitation at killing as many Westerners as they can (remember 9/11? the Bali massacres? and the ongoing ISIS massacres in Iraq and Syria?) They don’t distinguish between combatants and civilians, the armed and the defenseless. If you are not Islamic, to them you’re an “infidel,” and fair game.

People like that can’t be reasoned with. They laugh at Western leaders who voice their “outrage” and say they are “appalled” at the Muslims’ continuing massacres. “Outrage” and “appalled,” plus a dollar and a quarter, will get you a cup of coffee. The one thing these monsters understand, is deadly force, applied against them personally, when possible; or against their families, when all else fails.

Remember the film “The Untouchables”? It was about Chicago gangsterland in the 1920s. There was a character in the film, a tough police sergeant named Malone, played by Sean Connery of James Bond fame. At one point in the film, Malone tells the head of a special police unit which is combating the Mafia, that restraint and mercy have no place in their fight. “They send one of ours to the hospital? We send one of theirs to the morgue.” You can’t make it much plainer than that.

We in the Western world worry far too much about whether some government action that might protect us from a potential terrorist attack, is “racial profiling,” or “discriminatory,” or might “offend Muslims.” I’ll concede for the sake of argument that most Muslims are not, and do not support, these murderous terrorists. But why aren’t they speaking out far more than they are, AGAINST these people who are besmirching their own religion?  Don’t they realize that remaining silent leaves them tarred with the same brush as the murderers? Do they really believe, deep down, that a newspaper’s publishing a satirical portrait of their prophet Mohammed gives a group of Muslims the right to machine-gun to death the editorial staff of that newspaper? If they do, then what kind of a misguided religion is that?

Our airport security used to profile young, Middle Eastern males boarding planes in American airports because — surprise, surprise! — they were much more likely to try to blow up the planes than, say, 80-year-old White ladies from North Dakota. Then that sensible practice was abandoned as being “racist,” or “racial profiling,” or … something. In New York City, the police used to monitor mosques where there was evidence terrorists attacks were being planned. But Mayor Bill De Blasio, he of the extreme liberal persuasion who believes his half-black son has more to fear from the New York police than from his own soul brothers, discontinued the monitoring. Heaven forbid that the police be allowed to keep the populace as safe as possible.

These people, these Muslim terrorists, are murderers. And this is a war. In wartime, you don’t take the case to a grand jury, seek an indictment, read the accused his constitutional rights, etc. You don’t do those things. You simply kill him, as quickly as you can before he kills someone else on YOUR side. You kill him with as little “collateral damage” as possible. But if killing the terrorist also involves injury or death to the civilians who support that terrorist, then so be it. He has no regard for the lives of YOUR people; why should you have any more regard for the lives of HIS?

And spare me the usual malarkey about, “Oh, if we descend to their level, then that makes us as bad as they are!” Well, that’s highly arguable. But here’s the bottom line: In a war, you either kill — or you’ll BE killed.

← Christmas is sacred, mystical and merry
Politicians are faking on the tax, deficit issues →